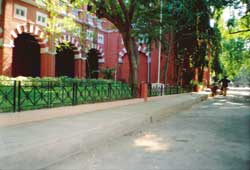 As the parched city of Chennai watched disinterestedly, stormwater drains carried precious water -- and of course, much of the city's refuse -- to that eternal dump, the sea. These drains were at one time touted as the ultimate answer to post-rain flooding, which would stagnate on the city roads for days. Three decades later, Sekhar Raghavan -- fellow at the Centre for Policy Studies and rainwater harvesting activist -- realised the need to innovate on these structures to meet Chennai's new pressures: increasing population, water scarcity and falling groundwater levels. Today, Chennai is one of the first metros to have implemented rainwater harvesting as early as 1993. Another remarkable aspect of the changed attitude in Chennai is that it is binding on both the Corporation of Chennai (coc) and private citizens of the city to participate in harvesting rainwater.

Sekhar Raghavan says, "Stormwater drains are a cure for the disease of flooding, but prevention is better than cure. These drains should be the last resort to solve flooding problems. The primary effort should be to harvest rainwater before it flows to the roads and stagnates there."

His work with harvesting the water that collects in Chennai's stormwater drains started in Besant Nagar. He worked at generating awareness in his own locality about the importance of harvesting rainwater. His persuasive skills must have worked their charm, for in 1998, the residents of Besant Nagar, through the coc and Besant Nagar Residents Welfare Asso ciation (bnrwa), appealed to the court against the construction of a stormwater drain in their locality.

Although Raghavan lost the court case, the case caused him to come in contact with like-minded persons in the officialdom. Shanta Sheela Nair, then chairperson of the Metro Water Board, and present secretary of the municipal and water supply department, and Rajesh Lakhani, then additional commissioner of the coc, were two such persons. The three of them worked together to find a way around Raghavan's defeat in court. The answer, in retrospect, seems simple: introduction of rainwater harvesting structures within stormwater drains. Nair issued an order to all municipalities in Tamil Nadu stating that the bottom of stormwater drains should be left unpaved, thus allowing rainwater recharge. All stormwater drains constructed after the order had recharge systems installed.

To understand the significance of this system, a look at the history of stormwater drains is necessary. A traditional stormwater drain is a channel constructed along the side of a road. It is paved on three sides. The top portion is covered with slabs, with openings at regular intervals for inspection. These drains were of particular importance in low-lying areas, from where precious rainwater would be carried away to the sea. Urbanisation has led to the construction of multi-storeyed buildings, where courtyards are paved, thus preventing seepage of rainwater into the soil. Equally significantly, temple tanks and ponds had to make way for housing colonies. Traditional water bodies -- eries, ooranis, ponds, lakes and tanks -- were filled up, and houses constructed on them. This effectively ensured that most natural groundwater recharge systems were sealed.

With the implementation and success of Raghavan's efforts came recognition of the merits of his model. The coc was also convinced. Rainwater harvesting, they saw, could work towards two ends: prevent the flooding of city roads and recharge groundwater aquifer. Today, the coc decides on how effective rainwater harvesting would be in an area, and whether stormwater drains might work better in a particular kind of soil or terrain.

The progress has been rapid. On the advice of Metrowater (Chennai Metropolitan Water Supply and Sewerage Board), the Chennai Metro Development Authority has issued a notification to all property developers, making rainwater harvesting compulsory when seeking a building plan approval. This makes citizens also responsible for harvesting rainwater.