Spice Board challenges US food department’s claims over salmonella contamination 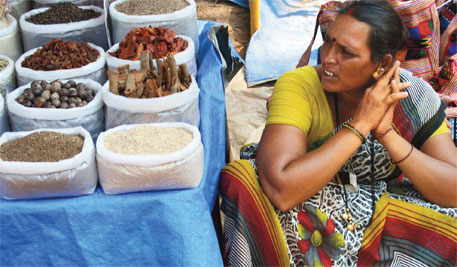 HOW clean and safe are Indian spices? Are fried snacks, made with condiments common in Indian cooking, contaminated? The US says Indian spices have salmonella, a bacterium that causes food poisoning, and has put a number of spice manufacturing and exporting companies on the US Food and Drug Administration’s (USFDA) watch list.

Contaminated spices from across the world have been in the news in the US periodically, but such reports have tended to be alarmist in the media. Sparking the latest round of concern is a recent study in the journal Food Microbiology that shows India—it is the top exporter of spices to the US—is rated second among the 37 countries from where contaminated spices shipments are sent to the US. Mexico tops the list.

But, Spices Board India, the nodal marketing and promotion agency under the commerce ministry, points out that the study in Food Microbiology was based on exports made between 2007 and 2009. Since then, the entire inspection regime for spices exported to the US has been overhauled, leaving little scope for salmonella-contaminated shipments to reach the US, it says.

The Kochi-based board says that an average 14,500 shipments are made to the US every year, and the total alerts on salmonella are around 290 or less than two per cent. The board’s director (marketing) K C Babu told Down To Earth, “Indian spices shipped to the US are tested and found salmonella-free to the extent of 98.5 per cent. This is based on import alerts and refusals data published by the USFDA.” Spice consignments, he emphasises, are mandatorily checked at the ports of entry in the importing countries. They are bound to destroy contaminated consignments then and there if found infected with salmonella. If consignments are found contaminated at retail points, Indian exporters cannot be held responsible.

In 1987-88, Indian black pepper was denied entry to the US due to salmonella from external material such as mammalian excreta and cow dung. Following this, a memorandum of understanding was signed between the Government of India and USFDA to have mandatory inspection of black pepper exported to the US. Accordingly, India set up the Export Inspection Agency laboratory. Other spices are tested at other laboratories set up by the board.

All the same, USFDA has put around 200 Indian firms on its red list due to salmonella-infected products since 2009. Quite a few have been listed this year. The consignment of these companies can be detained at the customs without physical examination. Of the total, around 70 per cent are spice companies exporting items such as chilli powder, coriander, turmeric, sesame seeds, charoli seeds and celery. These include Kerala-based Brahmins Foods India, Adani Food Products (Gujarat), Jabs International Private Limited (Maharashtra), K P Overseas Manufacture and Packing (Maharashtra), Kohlico Foods and Beverages (Maharashtra) and big names in the packaged snack sector such as Haldiram and MTR Foods Private Limited. 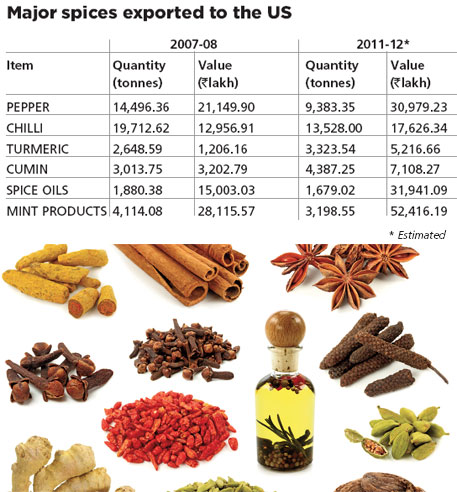 However, some of the red list companies Down To Earth spoke to claim ignorance of the development. A Kerala-based company appeared baffled and says it has not received any alert or formal communication from the US agency or the Spice Board. “None of our shipments was detained or rejected in the US this year in July,” says the official of a company that the FDA list shows as having exported contaminated coriander powder and sambhar powder.

Another red list exporter says there could be other reasons for Indian spices being targeted. “Indian spices are usually the best because of the country’s geographic location. But in recent years, competition is stiff because of the sharply escalating prices.” According to this exporter, who did not wish to be named, trade wars can get dirty but are aimed at bringing down the global prices of spices. Indian spices are expensive and although the volume of its exports has been dipping, its earnings have soared with values doubling in the past four to five years.

The problem why so many firms are on the red list is because the spices sector is largely in the unorganised sector. Director of the Indian Institute of Spice Research, Anandaraj, says, “Salmonella being a soil-borne pathogen, contamination can occur at field level, harvest and primary processing stage. During processing, if spices such as black pepper, chilli, coriander, cumin and fennel are dried on the floor or on mud/cow dung plastered drying yard, they can get contaminated. If spices are stored in moist conditions such as in gunny bags, they can again get contaminated with salmonella”.

Traders argue that spices undergo all the necessary laboratory tests before being exported and as such contamination cannot be widespread. In late 1980s, a lab was set up at Kochi, which found many instances of contamination. In the last three to four years, many laboratories have been set up at Mumbai, Guntur, Chennai, Delhi and Tuticorin. Spices Board officials say labs at Kolkata and Kandla are expected to be operational soon.

Salmonella contamination in food is a worldwide phenomenon. Even foods locally cultivated in the US and processed domestically get infected. There have been umpteen cases of recalls from many advanced countries, including those in the European Union. Most people infected with salmonella develop diarrhoea and fever in 12 to 72 hours after infection. The illness usually lasts four to seven days, but severe cases may need hospitalisation.

India exports over 200 spices and spice products in whole, powdered, blended and mixed forms. These include pepper, cardamom, chilli, ginger, turmeric, coriander, cumin, celery, fennel, fenugreek, garlic, tamarind, spice oil and mint products. In the last five years, US imports of Indian spices have doubled in value to Rs 160,543 crore in 2011-12 compared with Rs 86,716 crore in 2007-08 (see ‘Major spices exported to the US’).

But the study published in the June issue of Food Microbiology could cloud the outlook for Indian spices. The study titled “Prevalence, serotype diversity and antimicrobial resistance of salmonella in imported shipments of spices offered for entry to the United States, FY2007-FY2009,” was conducted by USFDA experts who claimed to have examined shipments from 79 countries, accounting for over 20,000 food shipments. They found around 7 per cent of the spices contaminated with salmonella in shipments from 37 countries. The complete findings are yet to be made public.

Analysts point out several flaws in the study, some of which are weighted against India. For one, most of the samples were collected from the retail establishments of various countries. Besides, the data it used varies. For western countries (Australia and Ireland, for example) they based their analysis on studies provided by official agencies whereas in the case of India, Egypt and Mexico, data came from private sources. “Comparisons must be made at the regulatory level, especially when such studies can have long-standing repercussions on the credibility of the producing and exporting nations,” worries Babu.