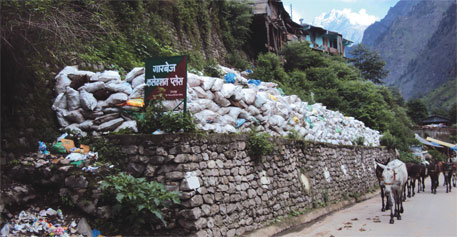 Neat piles of white sacks greet people as they enter Govindghat hamlet in Uttarakhand’s Chamoli district. The sacks are full of plastic bottles, food wrappers and remains of raincoats made of thin polythene, thrown by pilgrims and tourists along the trek to Hemkund Sahib gurudwara and the Valley of Flowers National Park. The 13-km pathway, that bifurcates at a small settlement called Ghangaria and leads to the two centres, is crowded during peak tourist season—June to September. Mules that tourists ride on also leave a trail of dung. Yet, the area is reasonably clean. All the plastic waste thrown by pilgrims and tourists along the path are picked up, packed in sacks and kept at places assigned for the purpose along the path.

This organised system of waste collection started in 2002. Before that, the pathway was a mess, says Jyotsna Sitling, former director of Nanda Devi Biosphere Reserve, who was then working to get the Valley of Flowers recognised as a World Heritage Site. At least 400 illegal shops had sprung along the pathway. But their owners did not take the responsibility of clearing the waste they generated. There are stories about a Canadian woman who tried to clean the area single-handedly by picking up plastic bottles and packets. “But nothing helped because the amount of waste was overwhelming and chances of the Valley of Flowers getting World Heritage Site status were bleak,” says Sitling.

It was around this time that the forest department took up the challenge. It roped in a non-profit at Bhyundar, the only village on the route, to collect plastic strewn on the pathway. In about three months, the non-profit Eco Development Committee (EDC) Bhyundar, had 4,000 sacks full of plastic waste, all brought to Govindghat on mules. The next year, it had 14,000 sacks. But all this waste stayed in Govindghat because the forest department had not yet formed a system to dispose it. In fact, the collection was as high as a three-storey building, says Sitling. In 2003, the forest department sent the waste to Dehradun, where it was segregated and then sent to Delhi for recycling. But transporting so much of waste was troublesome and expensive. The forest department collaborated with the municipal authorities in Srinagar town in 2004 to use its compactor machine that can compress plastic and make transportation easy. But after four years, the machine broke down and the forest department had to again take up the cumbersome task of transporting big, uncompressed sacks to Dehradun.

In 2010, the authorities at Joshimath tehsil allowed the use of their compactor machine. But it was overworked and the authorities refused to compress waste the next year.

In 2011, a group of trekkers saw the sacks piled at Govindghat and informed their friend Anis Ahmad, a waste dealer in Dehradun, about them. Ahmad worked out a deal with EDC. Till now, EDC was paying the transportation cost. But Ahmad gave EDC Rs 3,000 for each truck of waste and transported it for free. He collected 111 tonnes of waste and sold it to a recycler in Delhi, for profit.

This year, too, he awaits a similar arrangement with EDC. By June-end, EDC had 9,980 sacks of waste. With the tourism department’s decision to install a compactor machine at Govindghat, transportation is sure to become easy.

To lend a helping hand to EDC Bhyundar, the forest department made efforts to create a similar non-profit in Govindghat. EDC Govindghat was created in 2004. Till now, the two units have disposed of 587 tonnes of waste.

Most of the fund is generated by charging registration fee from mule owners, and dandis and kandis. Dandis take people up to the hills in palanquins and kandis carry tourists’ load in baskets. With increase in tourism, the number of mules, dandis and kandis also increased, improving EDCs’ collection. In 2003, EDC Bhyundar had collected Rs 10.4 lakh. This rose to Rs 29.6 lakh in 2011. EDC Govindghat, which had collected Rs 6.5 lakh in its first year, raised Rs 17.2 lakh in 2011. The non-profits also tax shop and restaurant owners on the path. The amount is used to hire sweepers and manage waste disposal.

The system works well for tourists and pilgrims also. Mule owners, dandis and kandis are more accountable because all of them are registered. Their rates are also fixed by the district authorities and reviewed every year.

The initiative has proved a big source of employment. EDC Bhyundar hires youngsters to provide information to visitors to the Valley of Flowers National Park. They are also trained to work as guides, accountants, cashiers and computer operators at both the EDCs.

Besides, many migrant labourers have found jobs here. EDC Bhyundar has 49 sweepers while the Govindghat EDC has 20. Most of them come from Uttar Pradesh where the monsoon is a lean work season. Dileep Kumar, for instance, has been given the task of cleaning the path outside the Valley of Flowers. Work at the brick kiln at Moradabad, his hometown, stops during monsoons. During his four months’ stay in Ghangaria, Dileep will earn Rs 2,500 per month, get food, a place to stay and medical care, all for free. The facilities are available to mule owners and head loaders as well.

The forest department’s efforts yielded results and in 2005, the Valley of Flowers was declared a World Heritage Site. EDC, however, admits that mule dung has not been taken care of because there is no space to collect it and turn it into manure.

What happens if the EDCs are unable to generate enough funds to hire sweepers? Satish Chandra Bhatt, chairperson of EDC Govindghat, suggests government could step in to supplement funds.

However, instead of collecting huge amounts of waste at a high cost, would it not be better to reduce its generation? wonders R N Okhal, a Mumbai resident on a pilgrimage trip across the country after retirement. “When I went to Gomukh, I deposited Rs 20 for each plastic bag that I carried. While returning, I got the money back when I showed the same number of plastic bags,” he says.

Another effective way to reduce litter would be to give tourists discount on water bottles when they return empty bottles, suggests Ranu Srivastava, a tourist who is program manager at Oracle India Private Ltd in Gurgaon. Ravinder Singh of Punjab thinks a difference can be made if people are fined for littering. There should be restriction on sale of cheap raincoats, says Vipin Kumar, Dehradun-based expert on plastic waste disposal.

But authorities believe implementing these suggestions could be a problem. “The number of people who come to Govindghat is huge. They come from far away places and bring their own plastic. It is not possible to regulate such a huge amount of waste,” says S A Murugesan, district magistrate of Chamoli. In fact, EDC Govindghat had tried to reduce waste by providing good quality raincoats on rent. But tourists were not ready to pay. In the masterplan for Uttarakhand, Kumar has suggested technologies that can be used to turn plastic into products that do not re-enter the waste cycle. Bread wrappers, for instance, can be turned into chairs, he says. He has also suggested charging tax from manufacturers who increase the shelf-life of their products by packing food products in plastic bags.

The forest department is making efforts to increase awareness about keeping the area clean, like painting messages on mountains and placing dustbins. Tourists need to do their bit, says S R Prajapati, divisional forest officer of Nandadevi Biosphere Reserve. “Just throw waste inside the bins,” he says.