Industry and activists have expressed conflicting opinions on GM crops. GEAC has a difficult decision to make

IT is just a 12-member body but the Agricultural Group (AG) of the Association of Biotechnology Led Enterprises (ABLE-Ag) must be about the most powerful lobby groups in India. Among the dozen companies are the world’s largest biotech companies— Bayer BioScience, Dow AgroSciences, Monsanto, PHI Seeds—and a clutch of rising Indian firms, all of whom are pushing genetically modified crops in the country. So when the group was allowed to make a presentation to the apex regulator, the Genetic Engineering Appraisal Committee (GEAC), it set off a battle by different interest groups.

Kavitha Kuruganti, who works on issues related to sustainable agriculture and farmers’ livelihoods, immediately shot off a letter to GEAC criticising it for allowing industry associations to lobby for unscientific and fasttrack approvals which jeopardise biosafety. “In a situation where the regulatory regime is already riddled with conflicting interests, it is objectionable that the GEAC allowed these industry bodies to make such a case for themselves,” she wrote.

As a result, the regulator has now allowed representatives of the following organisations to present their own arguments: the Centre for Sustainable Agriculture, Greenpeace India, Thanal and Kheti Virasat Mission apart from Aruna Rodrigues, the petitioner in the Supreme Court public interest litigation seeking a moratorium on testing of genetically modified organism in India. This should liven up the regulatory battle as GEAC, a staid body of about 30 scientists, bureaucrats and health experts, listens to the people’s voices on biosafety concerns.

Earlier, the National Seeds Association of India (NSAI) had also made a pitch for change in regulations. According to N K Dadlani, a director, the association’s demands were similar to that of ABLE but with two significant differences. “NSAI has objected to the working of standing committees that have been formed by GEAC because these are trying to lay their own rules. The standing committees should follow the guidelines of GEAC rather than come up with their own,” he says. The inordinate delays on their part are causing huge problems for industry. The other difference was the use of refugia. NSAI has demanded that the refugia should be planted on one side of field trials instead of all around the field.

Speaking for the big boys of the industry, Shanthu Shantharam, executive director of ABLE-Ag, told Down To Earth that it was seeking clarity in the regulations and eliminating wasteful procedures. For instance, the need to repeat overseas laboratory tests in India. “It is scientifically absurd and a complete waste of time.” Although GEAC has rejected many of ABLE-Ag’s demands and put several others on hold, the anti- GM lobby is incensed by some of the demands and has picked holes in its contentions.

The laboratory tests argument, according to former ICAR scientist G V Ramanjaneyulu, is not quite sound. “While the data from any lab following sound protocols can be accepted, it is important to see that the GM material (plant or animal) used should be produced in the country where it is going to be released. The expression of the plant varies with ecological situations,” points out Ramanjaneyulu, who is executive director of Hyderabad-based Centre for Sustainable Agriculture. “Certain proteins, etc, which could have detrimental effects and are not seen in temperate climatic conditions, could show up in tropical conditions.”

As for pollen flow studies, ABLEAg argued that these tests should be done away with given the prevalence of other data on this subject. GEAC’s response to this was that “only India-specific data, if available, will be accepted. In all other cases, the applicant will have to conduct pollen flow studies as part of the biosafety assessment”. This has not gone down well with those who see it as industry’s attempt to dilute regulations. “Pollen flow studies look at very specific kind of risks and the risk of contamination is very location-specific, depending on insect, wind, crop, varietal and other variables. In fact, apart from pollen flow studies, risk assessment should look at physical contamination or mixing up potential too,” says Kuruganti. 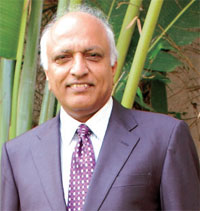 Other relaxations sought by industry could have serious repercussions, according to S Krishnaswamy, president, Tamil Nadu Science Forum. He says the Biosafety Research Level 1 and 2, the field tests of GM crops, have to be conducted at the same sites: the first for two years and Level 2 for one year. Allowing flexibility to the applicants is a risky idea, according to the professor of structural biology who has been tracking issues related to GM crops. “It is good that GEAC has not entertained ABLE’s proposal.”

However, it is ABLE-Ag’s proposals on refuge/insect resistance management that have provoked the strongest reactions. Ramanjaneyulu says the existing norms are already being violated because no refuge is being planted anywhere in the country. “Even GEAC has accepted it in its minutes. Any dilution of this will have serious repercussions,” Kuruganti, too, agrees. 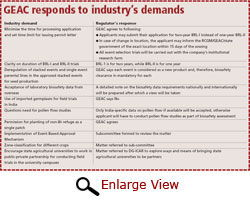 “The reality is that no refuge is being maintained by any farmer out there. It is also very clear that unscientific suggestions are being put forward, including the use of pigeonpea as refuge. Tomorrow, when herbicide-tolerant crops come in and there is herbicide drift from the crop, which refuge can withstand this?” Among the curious demands is ABLE-Ag seeking protection from vandalism: “With increasing NGO activism some universities are refusing to conduct the BRL trials… in such cases the applicant should be free to approach any other university or conduct trials in farmers’ fields. In such circumstances, GEAC should treat such requests on urgent basis so that the applicant does not lose an entire season due to procedural delays.”

Kuruganti finds it interesting that GEAC talks about release of untested GM material in connection with vandalism. “This is exactly the kind of risk that civil society groups do not want this country to take and, therefore, open air trials of untested products should not be allowed at all. This is not just about vandalism but about this possibility (release of untested material) existing in all trials.”