Repeat and step it up

Repeat and step it up 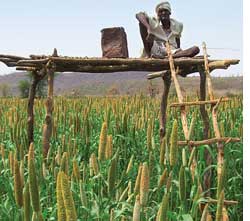 Who can tire of 'drought-proofing'?

First, there are the peddlers of Dwalpment, who use the word with alarming regularity in 'vision documents'-- as a compound noun, as the name of an abstract alternative that requires further thinking, and so funding, before it is concretized at the global level. Then there are those the peddlers of Dwalpment call the meddlers in dwalpment, who believe the word's true significance is that it describes an infinitely possible, infinitely replicable, action.

Finally, there are the drought-proofers. Farmer Jaggu Kengar, of village Dhangarwadi in Maharashtra's Yavatmal district, is very proud that in 2008, instead of buying onions, the village sent 36 trucks to the market--17 tonnes from his own fields. That year, 70 hectares of village agricultural land that barely produced enough grain for three months yielded a profit of Rs 21 lakh, after supplying houses with enough grain, pulses and onions for a year.

In 2006, Dhangarwadi built two check dams in collaboration with Dilasa, a non-profit, to harness run-off from a percolation tank close to the village. That cost Rs 4 lakh; the village's 100 families contributed Rs 1 lakh; other agencies provided support. To avoid the prohibitive cost of using motorized pumps, they resurrected a local lift irrigation method, wedding it to a distribution mode called phad .

The system can be repaired by villagers themselves. It is a network of shallow feeder channels in which water flows along the contours of the land, so regulating the speed of flow. Even as water reaches the fields, it percolates into the soil.

In 2007, grain production shot up 45 tonnes, and onion production 25. The Dhangar community--hence the village's name--rears sheep and is nomadic; average land holding is three acres. Now, they no longer roam outside for nine months of the year, looking for pastures; entire families no longer wander. Staying back to till the land is now imperative, for villagers now grow red gram, wheat, bajra and black gram.

Drought-proofers aren't an ideal community, because drought-proofing isn't an abstract activity. Resource conservation is primarily a collaboration between villagers, but the sphere of co-operation does not exclude non-profits.

For (another) instance, the ability of village Lachmanpura in Uttar Pradesh's Bundelkhand region to withstand a fourth year of drought in 2008--indeed, they sailed through the 2007 kharif and rabi with aplomb, with a few villagers even taking a third crop of vegetables--owed a lot to the work of the non-profit Parmarth, which encourages composting, farming without pesticides, using bullocks instead of tractors and, of course, soil and water conservation. It created a revolving fund to help small farmers stave off distress crop sale.

Once, Parmarth mobilized villagers. Today, farmers are pooling crops, taking them to bigger markets that offer better prices. Such solidarity cannot come only from the outside.


It is quixotic to exclude the State. Its agencies notoriously work at cross-purposes, especially in villages. But every village that has managed to harness them has prospered. Lachmanpura asked for assistance to sink four tubewells; they got it. Dhangarwadi, too, got its systems going with money government agencies provided, under one of so many State-sponsored schemes.

Here's a crucial ingredient to success if Hiware Bazar hadn't convinced government agencies to deliver precisely what it wanted, where would it be? Here's another it is possible to get the State to make available what is needed, as so many other drought-proofed villages dotting this dwalping nation have shown.

Drought-proofing is a compound noun. It is derived from a verb. But beyond name and action, it is an achievement. Step it up, and repeat.