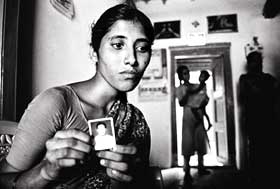 "Sarita's away in Warangal," Parvata Reddy told HRK. It was past 7 pm, and villagers tend to be suspicious of strangers who walk out of the dark. I moved to a well-lit portion of the courtyard. He looked closely. Better sight led to better memory. He recalled meeting me two years ago. He also remembered that Sarita was aactually in the village, and was willing to show us the way. As he went inside to get his footwear, hrk , a seasoned journalist from Hyderabad, raised his eyebrows: "Why did he lie?" Later, I was to realise he'd also lied two years ago about being Sarita's father.

That was June 18, 2004, when I'd met her at her parents' in Nawabpeta village of Karimnagar's Chigurumamidi mandal, Andhra Pradesh. It was 25 days after her husband Mahendra Reddy had killed himself. A farmer of the neighbouring Kondapur village, he had been humiliated by creditors for failing to clear debts. 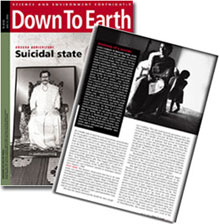 He left behind Bunny, his two-year-old daughter, and Sarita, who was three months pregnant (see 'Inevitable tragedy', Down To Earth, July 15, 2004). Reddy had tried to start a poultry business with borrowed money. When that failed, he migrated for petty jobs. When that too failed to pay, he borrowed further to invest in a cotton crop. He used every pesticide he would lay his hands on. When the crop turned out below expectations, he used one of the pesticides to end his life.

This time around, HRK and I were on our way from Warangal to Karimnagar, when we took a short detour because I wanted to go see how Sarita was doing. Did she get the relief package the state government had promised? I wanted to know about the baby, too. It had already been a long day, one of those that seem to follow a theme. When things uncannily follow a pattern. Early in the morning, our first stop had been a large poultry farm. The inkling of things to come was there in the anxious eyes of thousands of birds, noisily pecking chicken feed to eventually make somebody's dinner. I'm no votary for animal rights, but there is something terribly oppressive about the assembly-line atmosphere of modern animal farms. The nauseating smell -- that characteristic mix of vaccines and chicken droppings -- very often survives transportation over long-distances, and even rigorous overcooking.

The poultry stench hadn't quite left us when we entered the major market for agricultural inputs, especially seeds and pesticides, in Warangal. As the crop was standing in the fields, farmers were coming to buy pesticides. Taking their time to select from a range of pesticides on the shelves, their eyes betrayed the same bewilderment as the chickens at the poultry farm. Only this time, there was altogether different persona one the other side. The pesticide dealers looked content and peaceful behind the counter, probing with toothpicks the remains of a sumptuous breakfast, as industrious employees worked to ameliorate farmers' indecision regarding pesticide brands. I met Kedari Tatikonda, the biggest pesticide dealer in Warangal. Since two years ago, he had visited Kuala Lumpur as part of a Dow AgrSciences' entertainment offering.

After a series of travails, we managed to reach Kondapur in the evening, where we met Sarita's mother-in-law. She told HRK that Sarita never returned from her parents' since their son's death. Her husband Raghav Reddy was in the field. A villager accompanied us to the farm. Reddy was minding the bullocks in his cotton field. My first question to him was if he was indebted. He said no, he'd paid off all debts, even his son's. Of the six acres (2.4 hectares) that he and his two sons owned, he had sold off four acres (1.6 ha) his share as well as that of his dead son for Rs 2,40,000. The money had gone into settling debts. So, who owned the field he was cultivating? The four acres of unirrigated land was on rent for a total sum of Rs 8,000, he said.

How did he have the money to invest in high-input cotton when the land was on rent? (Tenant farmers can't get crop loans from the formal sector as there is no surety.) He reluctantly said he had taken a personal loan of Rs 40,000. And it wasn't just him. His younger son Srinivas, who had joined us on the field, was also deeply indebted, though he owned land. The formal loan wasn't enough for the cotton he grew, and it simply kept rolling over from one year to the next.

Raghav Reddy's cost of production had suicidal economics written all over. By the end of the season, he would very likely spend just under Rs 60,000 on his four acres. If it rained at the right time, he expected to get Rs 76,000 for his produce. If the rains played truant, pest attacks were intense and the price of cotton dipped, he would be lucky to get Rs 40,000, he estimated. Just pesticides would cost Rs 15,000. "If I don't spend on pesticides and other inputs, there's no chance of getting a good crop. Look at my neighbour's crop," he said, pointing to a field visibly bereft of vigour.

As we set off for his house, I requested HRK to ask Raghav Reddy how his agriculture was different from that of his son. Wasn't he also headed towards indebtedness and suicide? HRK, a discerning man steeped in the delicacies of the Telugu literary tradition, was visibly upset with my crudity. He took a while to put across the question. Reddy launched into an animated declamation, just as my camera battery gave up.


"My son made the mistake of straying from the straight and narrow of farming. His debts were due to venturing into poultry, into trying too many things. We Reddys are farmers. That's all we know. We are not coolies. And there is no job reservation for us. We are willing to live off loans and do cultivation in the hope of repaying debts. But there is no hope outside farming," he thundered. His younger son Srinivas had worked in the sales section of the Eenadu media group for two months, but then gave up. I was left wondering about recent homilies delivered by the Planning Commission and the World Bank on giving the small farmer an "exit plan" and creating more jobs in the non-farm sector. To Raghav Reddy, an exit plan from agriculture was a life without dignity and too much risk.

But then why was he stuck with high risks of growing only cotton? Why not hedge his risks by growing crops that are better attuned to the physical conditions of the region? Like jowar . "Look at all the fields here. All you see is cotton, and some maize. If I grow jowar , all the birds will converge on my field -- they love jowar -- and I'll be left with nothing. As for maize and pulses, I burnt my fingers with them last year. There is little money in them. Maize needs good rains, and pulses are long duration with paltry returns. Cotton begins to give returns in three months. Only cotton gives the hope of earning enough."

By this time, we had reached the twin houses he had built for his two sons seven years ago. We settled into the front room of Srinivas' house, under a watchful Ganesh radiating benevolence from a calendar -- it was Ganesh Chaturthi that day. But the popular deity's presence there was sponsored by Harita Seeds and Vikky's Agrosciences. Even the gods seemed indebted to suppliers of agricultural inputs. In stages, it came out that three others in the village had committed suicide in the past year due to indebtedness: a marginal farmer, a farm labourer, and a weaver.

Had the family got the government's relief package? The money had gone to Sarita, they said. "We asked her to help us settle the debts, but her family refused flatly. In fact, there is Rs 50,000 that the government is to release to settle debts.

But Sarita has told the mandal revenue officer to not release the money until I submit a written statement that all of Mahendra's debts have been cleared," the father said. "But she wanted a share in the proceeds from the land sale." A lot of acrimony had grown between the two families. It was getting dark, so we left to visit Sarita's parents.


It was when Parvata Reddy took us to his brother's house that I realised that he was Sarita's uncle. Two years ago, he had hogged the conversation, refusing to let the young widow get a word in the edgeways. He had worked as a contractor in the construction of canals, and was blessed with all the guile needed to survive in that line of business. As we sat in the anteroom, I wondered if he would let others talk this time around. 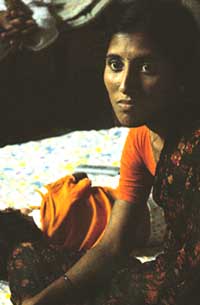 Sarita came out shortly, and was happy to see us. As I took out the camera, the family gathered around, and Sarita quickly got her sleeping four-year-old -- she was now familiar with the routine of the photo-op. HRK asked her about the relief money. Yes, she'd got it, and it was in the bank to finance her daughter's education. What happened to her husband's debts? Sarita looked to her family. They took over from there, saying that they had settled all the debts, and that Mahendra parents didn't make any contribution. They had also sold off Mahendra's land, not giving a share to Sarita. Outside, in a paved courtyard, was parked a shiny tractor. There were other signs of the family being well off. It was clear that Sarita was practically under her family's thumb. There was no point asking her about the child that was on the way when I'd met her last. Mahendra's family had told us about the abortion.

We soon left for Karimnagar. After a long silence, HRK said both sides were lying, but he found Mahendra's family more believable. "But the truth was there in Sarita's eyes; that was unmistakable," he observed with his poet's turn of phrase. My crude mind wandered back to the look in the eyes of the chicken at the poultry farm in the morning.