Rice goes against the grain

An Asian staple for over a millennium, rice has become important enough for the North to start raiding and patenting strains

Rice goes against the grain 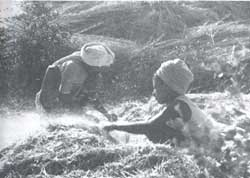 RICE has traversed the world and has ended up where it has no business to be. Should an American multinational, of all entities, hold the international patent for 2 traditional Asian rice varieties -- Indica and Japonica? Agracetus, the powerful biotech subsidiary of W R Grace, claims that it has improved these 2 varieties -- which have been nurtured over generations on vast Asian ricefields -- through gene transfers and now holds exclusive rights over them.

Indica and Japonica are among the common rice varieties used in Asia. Indica grains are long and slender and remain separate when cooked while the short and round Japonica grains become glutinous when boiled in water. Today, these homegrown rice varieties have been claimed by an alien American company.

But Geoffrey Hawtin, director-general of the International Plant Genetics Research Institute in Rome, calls the claim "a legal act of economic hijack". Rice is staple food to Asia's peoples. In 1992, Asia produced a staggering 481,984 million tonnes of rice while the developed world accounted for only 26,740 million tonnes. In fact, China is the biggest producer of rice, followed by India and Indonesia.

British agro-economist Francesca Bray writes in the book, Rice Economies of South-east Asia, that the earliest archaeological remains of domestic rice hail from Hemudu in the Zhejiang province of China and are dated to 5000 BC. Rice cultivation in India she dates to 1500 BC. From India, rice was introduced into Java. And by the 17th century, rice became an important part of the Japanese diet. In India, rice spread initially as a dryland plant, while wet rice cultivation originated in mainland southeast Asia.

The rice plant is extremely adaptable and its cultivation was not confined to well-watered river valleys and deltas. It could be grown along steep slopes cleared of virgin forests, as in Borneo or India, in the deeply-flooded waters of Burma and Bangladesh, or in the salt marshes won back from the sea as along China's coast.

In China, the seed grains were stripped of husk, soaked in water to separate empty kernels and then preserved in brine for use. A Chinese saying poetically prescribed melted snow for making brine because "it will dissolve the hot properties of the grain and the young grain will be unusually handsome".

Farmers passed new strains of rice from hand to hand. In Champa, an Indo-Chinese state south of Annam (now, central Vietnam), Indica rice was cropped twice a year as early as AD 1. The Chinese Song Emperor, Zhenzhong, decided to introduce this variety of rice in the Lower Yangzi region and sent for 30,000 bushels of Champa seed in 1012 AD. Chinese peasants experimented with this seed and it began to grow well in the watered lowlands.


Across Asia, manure and ashes from rice stubble burnt before ploughing were used as fertiliser. The Chinese even used human waste, fish meal, oilcakes and silkworm waste as manure. Pesticides, however, were a problem. The Chinese often mixed their seedgrain with arsenic and ashes but crops remained vulnerable to the "dark wind", or blight. The second problem lay in weeding. As early as AD 1, rice was planted in straight lines in China to permit the use of weeding hoes.

Paddy is unique among field crops because of the substantial amounts of water it needs to keep the field submerged for puddling and transplantation. Says A Vaidyanathan of the Madras Institute of Development Studies, "In many areas of Asia, the nature of the crop is determined by the unreliability of rain and by the fact that the total quantum of precipitation is low. In parts of peninsular India, only pulses and oilseeds could be grown during the rainy season. It was irrigation which made the difference, allowing farmers a switchover to paddy."

Rice cultivation virtually forced the gouging out of vast and varied irrigation systems in different parts of Asia. The earliest Japanese form was simple ponds. India took a different route with tanks, canals and dams. The most impressive irrigation network in southeast Asia was the one at Angkor Wat in Kampuchea. The "hydraulic city" was developed under King Indravarman (877-89 AD). A giant network of canals encircled the city and emptied into tanks called barays. These canals enabled the peasants to grow rice twice a year. But as the barays silted up, the water carried less fertile silt into the ricefields and yields began to drop. Angkor's rice economy and its Empire declined in tandem. The result was depopulation and reversion to a subsistence economy.

Historian Karl Wittfogel states in Oriental Despotism that irrigation systems required state supervision, which resulted in autocratism. But Vaidyanathan disagrees: "There is no tendency for an irrigated society to be centralised, bureaucratic and authoritarian. The institutional arrangements by which irrigated works were constructed and maintained were extremely varied."

Historically, investments in water control were undertaken by village authorities eager to extend their control over territories and resources. The development of local irrigation works, especially in south India, took place under local leadership. The state played an important role in larger irrigation systems such as the Ganga and Yamuna canals. In China and Japan, the state preferred to encourage landlords to invest in irrigation rather than commit their own resources. In 500 BC, a huge programme in China to control the waters of the Yellow river used corvee labour. Elsewhere, local level construction took place under landlords and clan leaders.


"The high-yielding varieties cannot withstand flood conditions but a local variety of rice, Jaisuria, keeps its head above water," adds F U Zeman of the Indian Agricultural Research Institute, New Delhi. In fact, floating rice, according to Bray, forms almost 1/4th of Bangladesh's total rice crop. Scientists at the Crop Research Station, Ghagharaghat, have attempted to replicate this seed and developed a variety called Jalamagna that grows upto 3 metres.

A rice variety popular for its taste and aroma is the basmati that is grown in the Indian subcontinent. The aroma of this strain appears to be the result of the environment of the traditional areas where it is grown. A basmati variety called Basmati 370, traditionally grown in Dasha in the Punjab province of Pakistan, lost its aroma when it was grown in Multan, a non-traditional rice area.

This is probably what happens when age-old varieties of rice are raided and co-opted by the North, with purely financial conquest in mind. You can geneticise and hybridise rice, producing new or easily-grown strains, but what you loose forever is flavour, a taste of history.