Safe, sound and stable...Viking makes a mark on the road 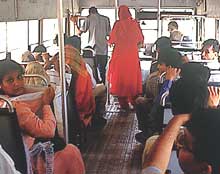 Viking, Ashok Leyland's cng-powered bus, has emerged as the clear leader in the mass transport segment. The bus is fitted with a three-way catalytic converter that can simultaneously remove all major pollutants -- carbon monoxide (co), hydrocarbons (hc) and oxides of nitrogen (nox). It achieves this by reducing the nox to nitrogen and oxygen, while oxidising the co and hc to carbon dioxide (co2) and water vapour.

The converter has an oxygen sensor that monitors the oxygen content in the exhaust and passes this information to the electronic control module for the necessary correction in air-fuel mixture. This results in maximum conversion of pollutant in the catalytic converter.

The vehicle is very ecofriendly because of low emissions. Its co emissions are 2.92 per gramme per kilowatt hour (gm/kwh), nox emissions are 2.91 gm/kwh, while its particulate matter is nil. Its high compression ratio of 11.5 and compact cylinders translate into greater fuel economy. Its high gross weight per unit displacement of 2.7 kilogramme per cubic capacity. Generally, this is used as an indicator of the power of an engine. The higher the displacement ratio, the greater the capacity of the engine to take a heavy load. Engine efficiency is further honed by the vehicle's closed loop electronics control, second only to a computerised one.

At present, the Viking is the pride of the pack.