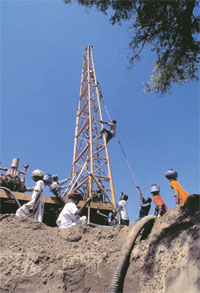 Legend has it that the beautiful goddess Saraswati sprung from the forehead of her father Brahma, the god of creation. It is said that as soon as Brahma looked at her beauty, he was filled with desire for her. Unhappy with the amorous attentions he bestowed upon her, she tried to dodge and hide. This is why the river Saraswati flows underground. And the brief appearance she made aboveground is the moment, legends assert, that she stopped to rest from her tiring run.

Whatever the merits of this legend, on June 15, 2002, Union Minister for Culture Jagmohan announced excavations to trace the course of the river Saraswati.

He has named a team of four experts -- Baldeo Sahai of the Indian Space Research Organisation (isro), Ahmedabad, archaeologist S Kalyan Raman, glaciologist Y K Puri and water consultant Madhav Chitle -- for this task. They will carry out the first phase of excavations, from Adi Badri to Bhagwanpura in Haryana, followed by a second phase from Bhagwanpura to Kalibangan on the Rajasthan border.

These experts will also look into deepening Kapalmochan and Ranmochan, two wells fed by Saraswati. It is believed that the Pandavas had taken a bath in these wells. If efforts to yield Saraswati water in these wells fail, experts have been told to tap tubewells. There will also be an attempt to trace the Saraswati at Thaneshwar -- once the capital of Harshvardhan -- a few kilometres (kms) from Kurukshetra.

Novel as this project is, it is an extension of the work done by the Rajasthan Groundwater Department (rgwd). The rgwd had, as early as 1996, embarked on an ambitious project -- albeit confined to the state of Rajasthan -- to retrace an ancient network of water channels.

These channels, buried 60 metres below the ground, were believed to be the route traced by the river Saraswati. The rgwd was clear about what it set out to do. Once these channels were retraced, and the sequence of the river flow established, it would go a long way in solving the water problem in arid Rajasthan. The theory was that these channels could transport surplus water from Punjab and Haryana during the monsoons, and store it for future use.

rgwd's research, design and development division in Jodhpur is monitoring the project with a Rs 4.7 million grant from the Rajiv Gandhi National Mission for Drinking Water (rgnmdw). The rgwd is assisted by the Central Ground Water Board (cgwb), isro, Bhabha Atomic Research Centre (barc) and the National Physical Laboratory. While rgwd is investigating sites of palaeo-channels, cgwb is carrying out drilling activities for water and soil samples. barc, meanwhile, is estimating the age of water and soil samples by carbon-14 dating. This experiment is novel in that Rajasthan would be the first to ever use palaeo-channels for transporting water and storing it underground.

Satellite images, supported by a four-year drilling exercise, which was guided by ancient literature, have established that the river Saraswati is not a myth. It was a huge river that died a premature death about 5,000 years ago, and is now buried 60 metres below the ground. A map of all the channels discovered so far leads one to conclude that it was probably 1,500 km long, three to fifteen kms wide, and about five metres deep. The river probably crisscrossed the present-day states of Himachal Pradesh, Haryana, Punjab and Rajasthan. S C Sharma, regional director, cgwb, says it continues to flow to the sea at a rate of 20 metres a year.

The prospect of rediscovering the Saraswati was triggered off by digital photographs sent by the American satellite Landsat. To the surprise of many scientists, the photographs showed the presence of underground water in a definitive pattern in the Jaisalmer area. It was during this time that scientists started speaking of a large palaeo-channel in Rajasthan that could well belong to a big river.

Remote sensing images of the isro and the Geological Survey of India (gsi) also found the existence of palaeo-channels of a mighty river in seven to eight places, all lying on the west of the Aravalli ranges. The images pointed to the possibility that the river started at the foothills of the Aravallis and shifted westward in stages. The river seems to enter Rajasthan in Ganganagar district, with its tail ends in Bikaner and Jaisalmer districts, a few kilometres from the Rann of Kutchh.

Further, a geophysical survey undertaken by the rgwd in the Tanot and Longewala areas indicated the existence of coarse sediments in the depth range of 30 to 60 metres pointing to the possibility of the existence of a river in the region. 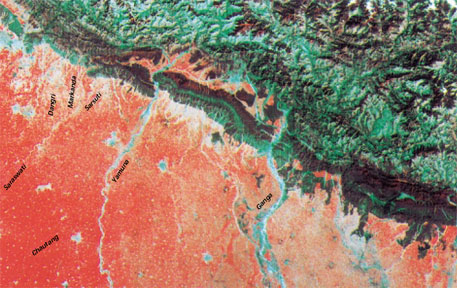 However, until the project initiated by Jagmohan was inaugurated, scientists were hesitant to call it 'revival of the Saraswati'. Officially, they preferred to call it 'revival of palaeo-channels'. However, S Kalyan Raman, member of the new project committee, is clear that he is working on the Saraswati. "The Harappan civilisation existed on the banks of the Saraswati. Nearly 2,000 of the 2,600 Harappan sites that have been discovered are situated on the old palaeo-channels of Saraswati." K K Srivastava, divisional chief of rgwd's research, design and development division, puts it differently, "It is a cooperative exercise involving both history and science."

The first evidence of the ancient underground channels came in the 1930s, when scientists Haren and B C Gupta from the gsi spoke of the channels. They claimed that they might belong to the river Saraswati. Bimal Ghose, former scientist at Central Arid Zone Research Institute (cazri), Jodhpur, also made a reading based on the topography map of Rajasthan. He confirmed that the ancient channels were a dead river that could well be Saraswati. It may be mentioned here that ancient literature and texts and the geographical history of the region were constant bases of reference in these studies.

The Rigveda, for example, mentions a mighty river that originates in the Himalaya and flows south-westwards. The Mahabharata speaks of a river that disappeared underground near the present-day town of Sirsa in Haryana. Besides, the geographical history of the now arid western Rajasthan points to the fact that the region used to be green and did not lack water resources. Barely 10,000 years ago, the whole region was host to a big river system, which attracted civilisations like the Mohenjodaro and Harappa.

Archaeological findings also indicate that a major river originating primarily from the same source as the present Sutlej flowed through northern Rajasthan, Bahawalpur and Sindh. The course of the river was southeast of the Sutlej's present course. Some scholars working on ancient literature also suggest that the Saraswati flowed along the present course of Luni river in Rajasthan, and shifted westwards progressively. Baldeo Sahai, one of the members of the new research project says, "Latest research indicates that the Saraswati was a perennial river connected to the Bander Poonch glacier in the Himalayas."

rgwd scientists say that the desertification of western Rajasthan started only 5,000-6,000 years ago. After the Ice Age, it is believed that the area had some massive glaciers, which flushed it with fresh water for thousands of years. Due to marine tectonic activity, the area from the Rann of Kutchh to Bikaner was submerged by seawater. This was the beginning of the desertification process.

The tectonic activity is also said to be the reason behind Saraswati's delinking from its source of water. Consequently, it is believed, the river dried up and was buried under desertification sands and alluvium.

In the early 1980s, rgwd scientists were amazed by the fact that fresh water was available in many places of Jaisalmer district, and some wells never dried up. This aroused considerable interest, for Jaisalmer's water is known to be saline. Investigations revealed that about 100 metres away from the site of the fresh water, the groundwater was saline. Some of cgwb 's observation stations for monitoring groundwater have fresh water in the depth range of 30-40 metres. "These stations are located in a linear pattern in the northeast-southeast direction, and never go dry," saysS C Sharma. "During drilling operations, alluvial sediments were found at a depth of 78-100 metres, pointing to the existence of a flow channel. It also points towards the existence of a fresh water source along the inferred palaeo-channel," says K K Srivastava.

Extensive surveys showed that there was a big water channel 60-70 metres underground, and the water was moving very slowly towards the sea. Drilling work to trace these channels were started in Jaisalmer. The second stage of the operations is in the Bikaner-Kolait region, upward of Jaisalmer. There are palaeo-channels in all 10 districts of western Rajasthan, and these have been mapped to prepare the river's ancient course.

The course of the river is yet to be traced completely, though. Besides, it is believed that, like any other major river, the Saraswati also changed its course frequently. This would explain the very large number of channels buried underground.

Once the fact that the channels do exist was established, rgwd commissioned the Physical Research Laboratory, Ahmedabad and barc, Bombay to determine the age of the water and the soil. A team of scientists led by S M Rao of barc's isotope division studied the samples collected from different depths. barc's dating suggests that the samples are as old as 20,000-40,000 years. The youngest sample dates back to 2,500 years. These findings place the samples in the 'marine transgression' age, when the desertification of Rajasthan started. The groundwater today contains more tritium, a radioactive material, due to atmospheric nuclear tests conducted in the 1960s and 1970s by the us and the erstwhile ussr.

rgwd, in a proposal to the rgnmdw, outlined the utility of the project. This report suggests that once the channels are demarcated, and their course traced, they could contribute substantially towards solving the water crisis in arid western Rajasthan. "Transporting water through palaeo-channels would reduce the cost of water transportation drastically, because we do not need to build a canal. It would also reduce wastage due to evaporation," says S C Sharma. The channels could also double up as storage facility for surplus monsoon water.

Officials say that the defence ministry has also shown an interest in the project, as it could mean adequate water supply to its soldiers stationed on the India-Pakistan border. Whether the large amount of data available with the army is utilised or not, the findings of the two projects on Saraswati are worth waiting for.