The controversy around the Kandi road through the Corbett Tiger Reserve 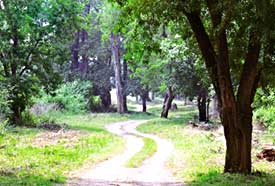 For Khyali Datt Dourbi of village Laldhang near Ramnagar in Nainital district, Kotdwar seems to have become twice as far as it used to be. The journey was 90 kilometres (km) long till 2001 when he could take the Kandi road through the Corbett Tiger Reserve (ctr); now it has become almost 160 km because ctr authorities have closed the road forcing commuters to take a circuitous route through Uttar Pradesh (up) between the two Uttaranchal (ua) towns (see map).

The Kandi road linking Kotdwar and Ramnagar has been in existence for almost 200 years. But a part of the road -- the 18 km Jhirna-Kalagarh stretch -- that falls in ctr has been a fair weather road (or kuchcha road, which had to be closed during monsoon). In 1996, prior to the formation of ua, up forest department said that "...this fair weather road (partially going through ctr) if converted to all weather road...will help in protection and management of the ctr." In 1999, the Forest Advisory Committee of the Union ministry of environment and forests (moef) also cleared the road.

But when the ua government proposed the 18 km stretch be converted into an all weather road, two non-governmental organisations -- Wild Life Protection Society (wpsi) and the Corbett Foundation -- opposed the move. They put in an intervention application in 2001 in an ongoing case on conservation practices in tiger reserves and their managment, filed by builder Navin M Raheja in the Supreme Court. The court ordered a stay on the construction of the road through ctr if it involved felling of trees. However, it also added that "...in case the road can be constructed without passing through ctr or affecting it as such, the restrain placed by us shall not come in the way of state of ua on the construction work of the road."

Concerned over the ecological impact of the road, ctr authorities subsequently closed it. Simultaneously, wpsi suggested an alternative: since ctr lies along ua's southern border, the controversial stretch of road could be shifted south, through up. In a meeting on February 21, 2003, the Standing Committee of the Indian Board for Wildlife (ibw, now called the National Board for Wildlife) proposed the road be constructed through Kalagarh-Pheeknala-Dhela-Ramnagar (see map: Proposed road 1). But the Kalagarh-Pheeknala stretch would pass through the reserve forest of up, which was unacceptable to up.

A survey conducted jointly by moef, ua and up governments, wpsi and Corbett Foundation followed. It proposed the road till Kalagarh be made on the existing fire line (a clearance made to contain forest fires) as suggested by ibw and then diverted to Pili Dam- Patrampur-Dhela Barrage-Maldhan- Hathi Dangar-Ramnagar (see map: Proposed road 2). The map included in the survey showed most of the road -- from Bhogpur, near Kalagarh, to Pili Dam -- in up, where a hard top road already exists. moef also suggested that "...a width of 1.5 km along the portion of the road passing through the buffer zone of the park will be notified as Eco Sensitive zone..." and no new construction of hotels, dhabas (roadside eateries) or repair shops should be allowed to come up in that area, except wildlife conservation related works.

The up government, however, felt that the Pili Dam-Patrampur stretch of the proposed road would "...divide the reserve forest of the state of up , which is also used as buffer zone to the park." up rejected the proposal.

Meanwhile, the up government proposed another alignment by diverting the road from Pili Dam through Vadigarh-Angadpur-Jaspur (see map: Proposed road 3). This modification has been accepted by both moef and ua, which now awaits the Supreme Court ruling. But this time it is the local people from Ramnagar area who are opposing the road. "This alignment has been proposed exclusively to benefit few influential resort owners including Raheja," alleges P C Joshi, president of the Kotdwar-Ramnagar Motor Marg Sangharsh Samiti (krmmss). He further charges that it was at the behest of the resort owners that, first, the ctr stretch of the road was put into abeyance and then, the new alignment was proposed which passes though their lands. "When there is already a national highway running parallel to it just six km away, what is the need of this highway?" he asks.

The alignment of the road also benefits a tourism project -- the Corbett Country Tourism Destination -- that is coming up near Hempur in Udham Singh Nagar district, claims Prabhat Dhyani, a resident of Ramnagar and a krmmss activist (see box: Destination tourism). Environmentalists, wildlife conservationists and political parties are also questioning why the project was cleared without Cabinet approval and without studying its environmental implications.

Transporters have no problem with the new alignment provided the problem of double taxation is sorted out. But they admit that it would make the journey longer and put unnecessary burden on travellers. Others, however, are in favour of making Kandi road an all weather road. "It is not necessary that status of the road should be of a national highway, even the thorough fare road is acceptable if it allows our vehicles to ply," says Joshi. Local people claim that if they have to cross up, they would rather use nh 74 which is running parallel to it (at a distance of 6 km).

The Kandi road could be used if it does not hamper the movement of wild animals, which is possible if ecological corridors are constructed. "We also understand the problem faced by travellers, but we also need to maintain the integrity of ctr," says Gyan Sareen, a wildlife conservationist at Corbett Foundation. "We are not against the road; if government can build an elevated expressway so that it does not affect wildlife, it is acceptable," he adds.

The alignment suggested by ibw is another option, provided both the up and ua governments declare eco-sensitive zones on either side of the proposed road and do not restrict wild animal movement, if any, in that area. If forfeiting its green crown was a great loss to up, ua got in its share relatively high percentage of forest cover and rich biodiversity -- most of it protected. Although the natural resources and biodiversity have to be preserved, it is imperative for the fledgling state of ua to enhance its basic infrastructure like roads, not only to set the pace for economic development but also to support the livelihood and other day-to-day needs of the local communities. Conservation of wildlife and infrastructure development have to go hand-in-hand, not one at the cost of the other. One hopes the two states realise this.