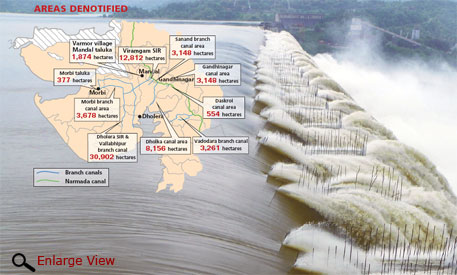 In 1999, when thousands of displaced people were protesting the construction of Sardar Sarovar Dam on the Narmada, farmers in Gujarat’s drought-prone areas were a happy lot. They dreamt of the green revolution the dam would usher and the prosperity it would unleash. They readily gave their fertile land to the Sardar Sarovar Narmada Nigam Limited (SSNNL) for an irrigation canal network, the third largest in the world. Nearly a decade and a half later, the canal gives them nightmares.

The Gujarat government has denotified about 80,000 hectares (ha) of the 1.84 million ha that was to get irrigated by the Narmada canal. This means, 4.33 per cent of the land that may have got greener, will not get any water now. Worse, SSNNL plans to denotify another 0.4 million ha to foster industrial development in the state.

With the Madhya Pradesh and Maharashtra governments yet to settle the displaced from the Narmada valley due to construction of a series of dams, farmers living in the catchment area and those in the command area of the dam are now on the same page.

Water goes from farm to industry

In January 2013, the proposed Dholera Special Investment Region (SIR) near Ahmedabad, asked SSNNL for 947 million litres of water every day for its 900 square kilometre investment region. Dholera SIR is one of the 13 SIRs which are synchronised with the Ministry of Railway’s Dedicated Freight Corridor (DFC). SSNNL refused, citing the Narmada Water Disputes Tribunal award, which permits only 1,258 million cubic metres (mcm) for domestic and industrial use. SSNNL had already allocated that much water to various industries and municipalities. Halol-Savli SIR, near Vadodara, too, asked for 12 million litres from the canal. SSNNL, reportedly, refused again.

But the government had already made plans to make industrial development easy in the state. In 2009, it had passed the SIR Act, which facilitated hosting industrial clusters. Using this, in June 2013, the state government started denotifying these regions from the command area. “We have to uphold the Narmada Tribunal award of 1,258 mcm for industrial and domestic use, so we are denotifying the command areas where industrial clusters have been planned. We will sell the area acquired for the canal network back to the Gujarat Industrial Development Corporation (GIDC),” says P M Patel, director, SSNNL.

What’s worrying farmers is the state government’s decision to denotify all areas falling under the proposed SIRs, Special Economic Zones (SEZs), industrial parks and GIDC estates. Earlier, it had announced 60 SEZs across the state, which would gobble up almost 31,967 ha.

The first to be denotified, Bahucharaji-Mandal area, spread across Ahmedabad, Mehsana and Surendranagar districts, does not get water from the Narmada now. About 2,923 ha in Surendranagar and Detroj tehsils, which would have been part of the Bahucharaji-Mandal SIR, has been denotified. This came as a double whammy for the farmers, who had already lost fertile agricultural and pastoral land (see ‘Taken by the horns’, Down To Earth, September 30). On August 15, after four months of protests, they forced the state government to resize the proposed SIR from 50,000 ha to about 10,000 ha.

“Because of the canal, we started growing three crops in a year. Government denotified the area from the canal network to bring Maruti to our village,” says Ajmal Thakore, sarpanch of Hansalpur village, which has lost about 2,000 ha to the upcoming Maruti-Suzuki plant. Despite being at the centre of the agitation, the village was not denotified. The state government is yet to put 2,923 ha back to the command area. However, land rights protestors of Jameen Adhikar Andolan, Gujarat (JAAG) say it has given them a verbal assurance.

Not far from Hansalpur, farmers of Dholera, have petitioned the state government not to denotify about 30,000 ha from the command area. Farmers of Vagra and Bharuch blocks in central and south Gujarat have already given up hope of receiving irrigation water from the Narmada canal project. A petroleum, chemicals and petrochemicals SIR planned near Dahej would eat up 14,927 ha that falls under the network’s command area. For Halol and Savli, the government has been tightlipped about its denotification plan. “We are never informed about denotification. We learn about these decisions from the media,” says Jayesh Sindhav, farmer at Vadgam taluka in Surendranagar district (see ‘Areas denotified’).

Stung by the shrinking size of the canal’s command area, SSNNL officials accuse farmers of stealing water from the canal. Reply to a recent RTI filed by JAAG reveals the state government has no account of about 50 per cent of water released from the main Narmada canal.

In 2012-13, a total of 8,461 mcm was released from the main canal. Of this, 3,318 mcm was officially given for agriculture. To meet water needs of urban areas, 1,615 mcm was given to Gujarat Water Infrastructure Ltd, Gujarat Water Supply and Sewage Board, Sujalam Sufalam Canal, Water Resource Department, Ahmedabad Municipal Corporation and other cities.

In August, SSNNL officials admitted to a local newspaper that it had no clue where a whopping 3,543 mcm had gone. In 2008-09, there was no account of 536.61 mcm water, which increased to 1,212.81 mcm in 2009-10, 2,045.25 mcm in 2010-11 and 3,860.38 mcm in 2011-12. Junior SSNNL officials say industries have been taking the water. “But there is no way to prove it. Farmers usually get caught taking water from the canals, but industries have their own ways of pumping water out,” says a junior engineer in Vadodara. P A Totlani, SSNNL Superintendent Engineer (Operations and Maintenance), squarely blames farmers for the major loss, and adds, “Some losses are due to evaporation and release for other purposes like the Sabarmati Riverfront.”

Yoginder K Alagh, former Union minister for Planning and Programme Implementation and for member of the Planning Commission, says, “Every cubic per second of water from the Narmada canal was planned according to the 13 SIRs and the climatic conditions of the regions. Besides, highly efficient hydraulic lift irrigation system was planned instead of the conventional irrigation network. By denotifying the command area, the Narmada canal network will be reduced to the conventional irrigation system and farmers’ needs will never be met”.

Meanwhile, the state government is facing flak from the Opposition for Narmada canal network’s tardy progress. Congress leader Arjun Modhwadia has questioned Chief Minister Narendra Modi’s ambitious plan to fill 77 dams in Saurashtra with Narmada water. “During the Bharatiya Janata Party’s rule, only 15 per cent of the 80,000 km canal network has been completed,” he says.

Tushaar Shah, director of International Water Management Institute, Anand says, “Five years after the dam and the main and branch canals were completed, they are irrigating less than 100,000 ha by gravity flow against their potential of 1.8 million ha. Also, for every hectare that the canals irrigate today, Gujarat has acquired 3 ha”. What SSNNL needs to do is give the orginal water distribution plan a relook and give farmers their due.