On July 4, 1997, planet Mars will see robots crawling about, seeking more evidence of life there, egged on by the extraordinary find of 'life' in a Martian meteorite (below) which had landed on Earth 13,000 years ago. But for the moment, that find itself remains a raging controversy 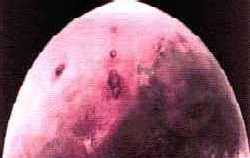 when Roberta Score, a former staffer of the National Aeronautics and Space Administration (nasa), picked up a little rock one morning in Allan Hills, Antarctica, she knew she was holding something unique in her hands. But it took all of 12 years to realise that she had found what could now be modern science's most prized - and most con troversial - property: a meteorite which holds in its bosom possible evidence of extra-terrestrial life. Controversial! Red dust is blowing all over the scientific world, kicked up by an announcement by nasa administrator Daniel Goldin on August 8, that there seems to be evidence that "primitive life" existed on Mars. "Not those little green men", he clarified, but basic lifeform.

The mother of all debates has only just begun. But it has not remained limited to scientific and philosophical implications of the find.Already, people are wondering whether this could be a colossally wrong interpretation, or a wild propaganda salvo fired by nasa when all federal agencies are desperately seeking to justify their budgets. China has lambasted the find as a hoax, but that could be just part of its politics. But the fact remains that two other scientists who have worked on the same meteorite, Jim Pepike and Chip Shearer of New Mexico University have expressed doubts about nasa's claim, without, however, debunking it outright. And the Paris-based European Space Agency (esa) has said that the meteorite firmly belongs to terra firma.

When the news was first released, reactions varied from cautious excitement to outright skepticism. A consortium of scientists from nasa's Johnson Space Centre (jsc) in Houston, Texas, the Stanford University in Palo Alto, California, the University of California, Los Angeles (ucla) and researchers from the Lockheed-Martin Corp, claimed to have discovered organic molecules, several mineral features - characteristic of biological activity - and possible microscopic fossils of primitive bacteria-like organisms inside the ancient Martian rock that crashed into Earth as a meteorite, called alh 84001. "The defining moment of space age could well be the discovery that we are not alone in the universe," says Richard Zare, professor of chemistry, Stanford University and leader of the Stanford research team. "Our finding is certainly a step towards such a defining moment."

According to nasa scientists, the "fascinating story" began when a 4.5 ounce, potato-like meteorite, which is believed to be a part of a rock knocked off from the surface of Mars about 15 million years ago, crashed into the icy continent, Antarctica, some 13,000 years ago. It lay there, perfectly preserved, until a National Science Foundation's Antarctic meteorite programme team, of which Score was a member, discovered it in 1984. Three years ago, the meteorite was identified as originating from Mars after its chemistry was found to match the planet's unique make-up.

"There is not any one finding that leads us to believe that this is an evidence of past life on Mars. Rather, it is a combination of many things that we found," argues David McKay, co-leader of the research team and a planetary scientist at the jsc. "These include the detection of an apparently unique pattern of organic molecules, carbon compounds that are the basis of life, and several mineral samples that are known products of primitive microscopic organisms on earth. Structures that could be microscopic fossils seem to support all this. The relationship of all of these facts in terms of location - within a few hundred thousandths of an inch of one another - is the most compelling evidence."

The igneous rock in the meteorite has been age-dated to about 4.5 billion years - the period when Mars is believed to have been formed. The rock, argues Everett Gibson, a jsc planetary scientist and a member of the research team, could have originated underneath the Martian surface. It may have been extensively fractured by impacts as meteorites bombarded the planet's surface in the early inner solar system.

Between 3.6 to four billion years ago - a period when the climate in Mars was thought to be warmer and wetter - water may have penetrated the underground subsurface rock. Since the water was saturated with carbon dioxide from the Martian atmosphere, carbonate minerals were deposited in the fractures.The team's finding indicates that living organisms may have also assisted in the formation of the carbonate, and some of the microscopic organisms may have become fossilised.

Then, about 15 million years ago, a huge comet or asteroid struck Mars, ejecting a piece from its subsurface with a massive force. For millions of years, the chunk of rock floated in space before it encountered the Earth's atmosphere 13,000 years ago and fell as a meteorite in Antarctica. "What we have found to be the most reasonable interpretation is of such a radical nature that it will only be accepted or rejected after other research groups either confirm or overturn our findings," says McKay.


What if we discover that life is not special to Earth? "We will only be able to answer this question if we revive interest in supporting scientific research," says Zare. The very title of the paper is cautious: Possible Relic Biogenic Activity in Martian Meteorite. Carl Sagan, a leading authority in the search for extra-terrestrial life described the findings as "evocative and exciting", but added that the chemical compounds reported by the research team are "not evidence of life". And, during the news conference itself, William Schopf, a palaeobiologist from ucla, presented the opposing view and said that the "smoking gun" he would look for is evidence of cells with a cavity, "where the juices of living organism reside".

There are many others who are not convinced with the evidence. China poured scorn on the us announcement of fossilised evidence of life on Mars, saying an increasing number of scientists has stopped believing America's "sensational discoveries" - fake research findings by two American scientists in discovering cold fusion were laid bare a few years ago, the official Xinhua news agency said. Geologists attending the 30th International Geological Congress in Beijing have also voiced doubts over the us claims.

Marcello Coradini, coordinator of the solar system mission at esa told The Financial Times, London, that the rock containing what looks like a fossil could be from Earth. There is not enough physical evidence to say it came from Mars. Any rock blown off the surface of Mars should have melted from the sheer force of explosion, he said. In the meantime, Pepike, director of the Institute of Meteorites at the University of New Mexico, who studied the rock, found that it lacked a key sign of biological activity. In a paper to be published soon in the Geochimica Et Cosmochimica Acta, Pepike and Shearer argue that the pyrite samples from the meteorite contain two sulphur isotopes, sulphur 32 and sulphur 34, "whose ratio changes on earth in the presence of biological activity". Pepike says, "When we looked at the ratio, there was no evidence that it was in a ratio for life forms. However, Pepike agrees that his findings do not necessarily debunk nasa's interpretation of what they have found in the meteorite.


That the red planet may have once harboured life has certainly augured well for nasa. The American space agency is gearing up for a scientific assault on the planet and is inviting global collaboration. President Bill Clinton has announced that he would convene a space summit in November this year for scientists of international repute.

According to Goldin, American spacecrafts - an orbiter and a lander - are planned for launch this fall. The Mars Global Surveyor, scheduled for lift-off in November, will map the geo logical features while orbiting the planet. The Mars Pathfinder, set for launch in December, will carry a small rover designed to nose up to the Martian rocks and analyse their chemical composition. Eight more nasa spacecrafts - two every other year - will rocket towards Mars within a decade.

The possible link between the findings and nasa's financial sustenance through Mars research, fuels speculations that this could be a propaganda blitz. If proved false, it will possibly be the biggest scientific hoax ever. Yet, the impact on science and philosophy, if the find is validated, boggles the brains. As Zare says, "The realisation that we are living on a tiny planet orbiting a mediocre star in the galactic hinterlands may be humbling. Yet, the possibility that life is not just limited to Earth should make the universe seem an even more exciting and wondrous place."