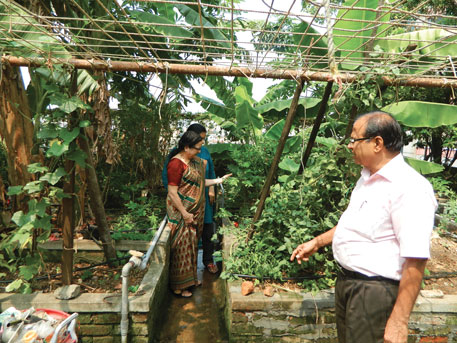 The sight is unbelievable. Three big coconut trees, 35 banana trees, papayas, guavas and chickoos, grapes with bunches of green fruits hanging, yellow-green pumpkins, light-green ash gourds, whitish-green snake gourds winding their way down from a pandal, lush foliage of dark-green bitter gourds, tender okra, drumsticks, tomatoes, many varieties of beans and tubers such as yam and tapioca, turmeric, garlic and ginger. All on a terrace! And that too on a four-storey building amid high-rises at the busy Convent Road in Kerala’s Ernakulam city, the business capital of the state. The garden even has a small lotus tank, and a vermicomposting facility.

This green paradise belongs to 70-year-old A R S Vadhyar, a civil engineer. “City-dwellers with their busy jobs often complain that they don’t have time and space to grow anything. But we have been successfully doing rooftop farming for the past 15 years,” says Vadhyar. When Vadhyar started terrace farming, many thought he was crazy. But now a large number of people in cities and towns of Kerala are growing fruits and vegetables without using chemical fertilisers, pesticides and insecticides. Those who take up terrace farming are not regular farmers, but professionals such as engineers, doctors, employees from the public and private sectors, senior citizens, women homemakers and students. “There could be a minimum of 20,000 rooftop cultivators in each of the 14 districts in the state,” says K Prathapan, director, State Horticulture Mission, which has been promoting organic vegetable farming. “The main reason for this trend is growing health consciousness and fear of consuming contaminated food,” adds Prathapan.

Kerala faces two serious issues: shortage in production of vegetables and fruits, and chemical contamination. Kerala’s annual requirement of vegetables is three million tonnes. “Despite having good rains and sunlight, the state produces only 30-40 per cent of its requirement,” says Prathapan. The rest is imported from the neighbouring Tamil Nadu and Karnataka. With high levels of literacy, Keralites have been increasingly moving away from farming and purchasing almost everything from the markets.

But there is no guarantee about the safety of vegetables and fruits available in the markets. “Farmers in Tamil Nadu and Karnataka often apply huge quantities of chemicals such as pesticides, insecticides and fungicides to vegetables and fruits. The same is true for commercial cultivation within the state,” says Lal Varghese Kalpakavadi, chairperson of the state-owned vegetable procurement agency, Kerala Horticultural Products Development Corporation. He says regular tests of vegetable and fruit samples from the markets reveal high levels of chemical residue. “The state has a high cancer incidence rate and one of the reasons for this could be chemical contamination of vegetables and fruits,” he adds.

While people like Vadhyar and Abhilash P T, an engineer with Tata Consultancy Services in Ernakulam, grow vegetables in specially-built space on the terrace, a majority of terrace farmers grow vegetables in plastic “grow bags” which are available at Krishi Bhavans under the state agriculture department and also at private outlets. “These bags are standardised for ultraviolet rays. So they last for at least 4-5 years,” says Joji Mathew, an engineer from Thiruvanantha-puram, who practices rooftop farming. 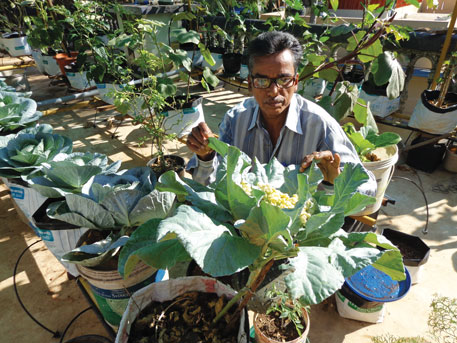 The bags come in different sizes, and they are filled with a mixture of top soil, cow dung, river sand or Laterite powder, coir pith and Pseudomonas, a biopesticide, in equal proportion. All these components are available in the government’s agro-bazaars. These bags became popular in 2010 when the Horticulture Mission distributed thousands of such bags with a variety of plants and a guide free of cost. In Thiruvananthapuram city alone, more than 33,310 households were each given 25 such bags and plants. “We are sure at least 60 per cent of households are continuing with rooftop farming,” says Prathapan. Now, 25 bags with the soil mixture are sold at a subsidised rate of Rs 500.

Many like R Raveendran, a resident of Ulloor in Thiruvananthapuram, and A K Mathew, resident of Kakkanad in Ernakulam and former general manager of Hindustan Insecticide Limited, make the mixture on their own. “The solution can be prepared by spending just one-tenth of what you would spend for buying organic manure,” says Raveendran, who got the Innovative Farmer Award in 2014 from the Indian Agricultural Research Institute.

Social media too has played a crucial role in sustaining the organic terrace farming movement. Groups such as Kitchen Garden and Krishibhoomi share knowledge among members. In August last year, a few social media groups came together to form a Kitchen Garden Forum on the World Kitchen Garden Day. The forum, along with Thiruvananthapuram-based non-profit, Thanal, organised a three-day exhibition-cum-training workshop on organic farming. The social media groups have planned to grow paddy on the terrace in pots so that they won’t need to buy rice for Onam, the popular harvest festival.

Joji Mathew points out such workshops help generate awareness among people about ongoing government programmes, subsidies and simple technologies. For instance, the state’s Department of Environment and Climate Change (DOECC) is promoting a project combining terrace farming and biodegradable waste treatment, under which a customer is provided 25 “grow bags” with vegetable seedlings and a micro irrigation system. The system is equipped with an automated timer and can run even when the terrace farmer is out of town. The actual cost of the system is Rs 10,000, but it is available at a subsidised rate of Rs 3,000. A person who avails this facility is given 70 per cent subsidy for a biogas plant. The cost of the plant is Rs 15,000. “The slurry from the biogas plant is good manure for organic farming,” says C S Yalakki, director, DOECC, Kerala.

“To advise and help the urban rooftop cultivators, there should be skilled and trained farm service providers as is in the case of the IT sector,” says S Usha of Thanal. There are a few service providers like the Thiruvananthapuram-based Karshika Karma Sena, which is a joint venture of Kudappanakunnu Gram Panchayat and Krishi Bhavan. The technicians of this group assist clients—from selecting a plot for farming to marketing the produce. But the service is available only in Thiruvananthapuram. Women’s self-help groups under the Kudumbasree Mission, a state agency for empowering rural women, is also providing the service, but in a limited way.

Rooftop cultivators point out that there is immense scope for such service providers and their services should be made available throughout the state through the offices of the state agriculture department, Horticulture Mission and Vegetable and Fruit Procuring Council. If this happens, urban rooftop farming will revolutionise the food deficit state.