Worldwide, traditional medicinal systems are in the process of being modernised. Besides health care and conservation of medicinal plants, the rights of the local communities that have preserved these systems for centuries are also at stake 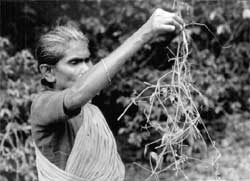 " medicinal Plants for Survival" was the theme at the International Conference on Medicinal Plants held in Bangalore from February 16 to 19. The conference was organised by the Foundation for the Revitalisation of Local Health Traditions (frlht), a Bangalore-based non-governmental organisation (ngo), and was held at the National Institute of Advanced Studies of the Indian Institute of Science (iisc).

The assessment of over 400 participants, including researchers, indigenous community members, ngos, traditional healers and industry representatives from 35 countries, was that conservation of medicinal plants and the revitalisation of their health care applications have now become matters of international priority.The four-day exercise saw the emergence of draft guidelines for the "Bangalore plan of action for medicinal plant conservation, utilisation, trade and benefit sharing with the stakeholders".

In his inaugural address, Peter Raven, director of the Missouri Botanical Gardens, usa , and member of the advisory committee (science and technology) to the us president, underlined the need for conservation. "Ever since the industrial revolution, we have not been managing our resources sustainably," he said. "The future lies in understanding and managing our biodiversity," he added.

A B Cunningham, regional coordinator in Africa of the international project known as People and Plants Initiative, stressed on balancing growing human needs with conservation. Gerard Bodekar of the Health Services Research Unit of University of Oxford, uk , said that even as more people are moving towards traditional systems of medicine the world over, the supply is not meeting the demand. "A disturbing emerging scenario is that as more affluent people are switching to traditional systems of medicine, these are getting out of the reach of the poor, who now have no choice but to turn to allopathy," he expressed. "Nearly 80 per cent of the world's population depends on these systems. These should not be allowed to get out of the reach of communities that have managed the resources and preserved the knowledge," he added.

Madhav Gadgil of iisc's Centre of Ecological Sciences (ces) said local communities should be involved in biodiversity conservation. Issues related to conservation, trade, benefit sharing, community participation and intellectual property rights were discussed during workshops. Madhav Karki is the coordinator of the International Medicinal Plants Network (impn) of the International Development Research Centre (idrc), New Delhi. "The draft plan of action needs to be more focused. There is a need to agree on some concrete and feasible actions," he said.

Raven felt the plan is not practicable at all. "The draft is polemic," he said. "This is really a tragedy, considering the role of medicinal plants in our very survival. A distinction between needs and beliefs is essential at this stage," he added.
The Convention on Biological Diversity (cbd), which covers important issues related to biodiversity, was ratified by over 100 countries, including India, at Rio in 1992. The issues surrounding medicinal plants are complex: their utilisation, sustainable harvesting and conservation. Then there are the questions of exploitation - by, for, and at whose expense? These issues can be broadly classified into three categories: scientific, social and commercial, which are overlapping and interdependent.

All these issues address "alternate" systems of medicine. These systems are gradually being referred to as parallel systems, which implies that these systems are not just something to turn to when allopathy does not work. Increasing disillusionment with allopathy is guiding people towards these systems even in the developed world. The industry, obviously, is waiting to capitalise on the market, sniffing for knowledge of how medicinal plants have been used traditionally. With no foolproof agreements between indigenous communities and industry, there are fears that the latter will exploit the former.

Increasing use of plants for medicinal purposes by the North is depleting resources in the South. These plants are finding their way from village harvesters to the industry, instead of local healers. "Globally, demand in the North is depleting resources in the South," said Bodekar. "The market in the North is growing. For instance, one-thirds of all Americans use 'alternate forms' of medicine, 40 per cent of Australians spend on these, and in the uk, almost two-thirds of government doctors direct their patients to traditional medicine," he indicated. "Despite a global annual trade value of us $800 million, the trade is more or less a 'hidden economy'," said Cunningham. "The species specific nature of international trade has been ignored. In Germany, for instance, more than 1,500 plant species are in the market," he added.

Bioprospecting (looking for biological resources that can be exploited for use as well as for commercial gains) has an unpleasant sound to it. "We should be looking at cross cultural transactions, since that is what bioprospecting is all about," said Darshan Shanker, director, frlht. "Unfortunately, a mutually respectful character is lacking," he adds. impn has been promoting the term "social contract" in use of bioresources. "This stresses the need for being more responsible in enterprising activities while using medicinal plant resources. Industry should be made to enter into long-term partnerships with communities - and not individual agents or contractors," Karki pointed out.

Maurice Iwu, executive director, Bioresources Development and Conservation Programme (bcdp , an international ngo in Nigeria), indicated that while bioprospecting, companies prefer to tap traditional medicinal systems to collect plants. These are used to develop novel drugs, which are then sold right back to the very people from whom the information and raw material had been extracted at unaffordable prices, Iwu added.

Bioprospecting also brings in the issues of access and benefit sharing, "the most hotly debated subjects in the international arena" according to Ashish Kothari of the Indian Institute of Public Administration, New Delhi. "These issues have to be sorted out at the national and international levels. Whose knowledge, whose resource, what purpose and whose benefit," he said.


"Africa or Asia, it's the same story. Genetic resources have been contributing towards European economic growth since the 18th century. Nothing has changed," he said. He is of the opinion that nations of the South, sitting on "hot spots" of biodiversity, do not use their bargaining power in the absence of the much-needed imaginative thinking and regional cooperation. "Even now, genetic material is transferred out of Africa on academic excuses and traded without the knowledge of the source country. Same in the case of medicinal plants. Benefits hardly reach the donor country. The reason for this lopsided relation is that in most cases, value addition is done overseas, and the product sold back at 'fair market prices'," he explained.

Benefit sharing also becomes an important issue given the rapid advances in biotechnology. These have made redundant the need for repeated access to the source area. "These advances only reinforce the necessity of developing a rationale for benefit sharing," said Sheshagiri Rao of the ces. "Cultural transactions should be at the heart of all efforts. Local communities need to be empowered and their rights legalised before their knowledge is put on the Internet," Shanker commented.

Iwu is concerned about legal protection of traditional knowledge in India. "What prevents India from patenting its knowledge? The only way to ensure that communities get their share of benefits is to give them legal protection," he categorically stated.

Resources and their conservation are closely linked to social issues. Anil Gupta of the Indian Institute of Management, Ahmedabad, pointed out that the current level of usage of medicinal plants in some cases is already unsustainable. Gupta is also concerned about the knowledge that is dying with the elders. "Knowledge (traditional medicinal systems) without resources (medicinal plants) is of no value. At the same time, resources cannot be conserved if the knowledge dies out. Young people need to be convinced about the importance of this knowledge," he suggested.

The conservation of an extremely important traditional system and the resources on which it depends only highlights that people-oriented projects and good science are two sides of the same coin. According to Uwe Schippmann, scientific authority to the Convention on International Trade in Endangered Species (cites), Germany, "Conservation applies to knowledge on the usage of plants, to conservation of intellectual rights, and, most importantly, to conservation of species."