That's what Tripura's tribals get for a resource that is theirs 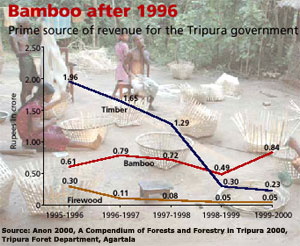 The region called 'the interior' -- the tribal-dominated hills of Tripura -- begins half an hour out of Agartala, along National Highway 44. Depending on whom you ask, it is either the domain of militants or the armed forces. Certainly the latter's presence is omphalic: soldiers, backed by jeeps mounted with light machine guns, deployed every hundred metres or so. They patrol and control all vehicular movement: time-bound convoys sinuously skirt the hillsides, and nothing can enter or leave this region without due permission.

Through highway 44 flows all that keeps the state ticking -- cement, salt, iron; literally, 'development' trucked in from elsewhere. Week after week. Only Thursday stands out. On this day, every week, there emerge from 'the interior' hundreds of truck carrying the same cargo, a commodity the state refuses to acknowledge is its true hope: bamboo.

Chakmaghat, in Dhalai district, is where 'the interior' and the rest of the world meet. It's a patch where the 166 kilometre-long Khowai river, running parallel to highway 44, flattens out as it enters plain-land.

Bamboo is floated down the Khowai. It is picked out at Chakmaghat, loaded on to trucks and carted off. From Chakmaghat alone, in 2000-2001, 6.43 million poles of bamboo worth about Rs 82 crore were taken out of the Tripura hills. There are years in which the sale here has crossed the Rs 100 crore barrier. And Chakmaghat is only one of four such large centres of bamboo trade in Tripura.


Tribals living in the 1,025 square kilometre (sq km) hilly watershed of the Khowai. Every Friday, they walk into the forest. It is an illegal entry, for the forests here are reserved (unlike in much of northeast India, Tripura's people have lost their rights over forests to the State). Once inside, they fell bamboo.

Much of the forest in 'the interior' is bamboo-dominant. That's not surprising. Forests comprise 54.76 per cent of Tripura's 10, 491 sq km land mass. Of this forest area -- 5,447.84 sq km -- bamboo occupies over 2,397 sq km. 26 species grow in the state. Two species dominate: Melocanna baccifera (muli) and Bambusa tulda (mritinga). Muli is the most used. Around 80 per cent of bamboo utilised in the state comprises 3 species: muli, bari (Bambusa polymorpha) and barak (Bambusa balcooa).

For four days, till about Monday, the tribals fell Muli bamboo. Then begins its floating. Bamboo measuring 10-12 haath (equivalent of a foot) is bundled into a pack of 12 or 16, called a kandhi. These kandhi can negotiate the small tributaries of the Khowai into which they are thrown. At the mouth of these tributaries are stationed people who grab the kandhi and lash them together to make a chali.

A chali is a huge raft, 4,000 pieces strong. Once it is ready, two people -- usually non-tribals -- steer it down the river. The chali is kept close to the bank, to avoid getting sucked into the river. The two men -- one in front, the other at the back, clinging precariously to the precious cargo -- steer the chali for two days before Chakmaghat bobbles into view. By Wednesday or Thursday.

The chali is docked by the roadside and dismantled. Narrates Selim Reza of Tripura Bamboo and Cane Development Centre (tribac), Agartala , "On a good day about 40 chali are docked. The bamboo piles up. Trucks arrive: the time has come for the most precious resource of Tripura's people to be legally smuggled out, for a pittance. The tribal in the hills has received Rs 0.50 for each bamboo pole he's felled. The same fetches Rs 1.20 to Rs 2.00 in Chakmaghat and Rs 3-Rs 5 in Agartala. Each truck takes out 3,500 to 3,700 muli bamboo."

No walkie-talkies manage a traffic worth hundreds of crore. No one fails to deliver, no one falters on payment. It's as honest as exploitation can get. The most inconspicuous entity in this operation is a man used to driving -- with an accomplice -- almost 30-40 km past Chakmaghat to Ganganagar, deep into 'the interior'. He is a trader. He holds the licence to cut bamboo in the state. There he sets a deal with a tribal supplier, to get the bamboo to Chakmaghat. He leaves behind his accomplice, a chali navigator. Work done, he drives back to Agartala.

It is extraordinary how impervious he is to the scrutiny of the security forces, the extractive demands of militants. Transit permits from the forest department aren't a problem. Nor is the passage of his trucks. In all this, what goes unrecorded -- what cannot be recorded -- is the money security forces, forest department officials and militants make out of the trade. In this 'disturbed' area, the bamboo flows downstream unimpeded. Effortlessly, it reaches Agartala. For bamboo, there exists no 'line of control'.

Would it be an exaggeration to say that all nineteen tribes the state has are involved in this trade? It is estimated 2.46 lakh families in the state are engaged in bamboo-related vocations. Besides Chakmaghat on the Khowai, the trade thrives as Kalshi on the river Muhuri, Kumarghat on the river Manu and Sonamura on the River Gumti. Much of it goes into making the houses and walls of people in the region. Some reach paper and pulp factories in Assam. A lot is smuggled into Bangladesh.

Who else makes money out of it? For the state government, it has become a major source of revenue, after earnings from felling timber dried up post-1996, the year the Supreme Court passed an order restricting timber felling in northeast India. In 2000 bamboo comprised 76 per cent of the revenue the state forest department earned (see graph:). But for the tribal -- the resource's owner -- it remains a 50-paisa pole commodity.


Tripura is a bit luckier than Mizoram. As compared to Mizoram which has 10.51 million tonnes of muli bamboo stock, Tripura has only 0.81 million tonnes to manage when it flowers. Moreover, it has a fledgling bamboo cottage industry to utilise the resource. Bamboo products -- though of low value addition -- do employ 70,000 people, according to the Tripura Development Mission, prepared by inbar. The industry after value-addition is estimated at Rs 71.2 crore. As per inbar estimates, Rs 635 are realised per tonne of bamboo used. This can be increased several fold. Right now such cottage industries use villages as mere raw material suppliers. Tripura's forests supply all the raw material of the country's agarbatti trade, except incense. But a mere 55 per cent of the trade goes back to the state, just because all value addition happens elsewhere. Says Pratap Dutta of Kumarghat: "A person in Tripura gets Rs 7 per kg of agarbatti, whereas the final product is sold for Rs 12.65. If people here layered the burning material on the agarbatti sticks, the weight would go up three times. And, the government charges octroi by weight. So won't it again if people were involved in layering the agarbatti? Today people in Goa smuggle out our material, process it and sell it as finished products. Why can't we do it ourselves?" he asks. Dutta should know. He runs one of the only four agarbatti factories in Tripura.

Today there are signs that muli -- the bamboo variety used to make agarbatti sticks -- is fast disappearing. "But," laments Gopal Das of Tulakona, Jirania block, West Tripura district, "When we informed the government about bamboo flowering, we were asked to stop worrying and plant bananas. But how can we be so carefree? I can see seeds falling around and the culms drying up." "Earlier we would find bamboo in hours. But today, I can't find it even after walking an entire day. I don't know if its flowering or just getting cut but it's availability is much less today, compared to last year," confirms Konkila Debburma from Lalcherra village who earns a Rs 30 per day by slicing muli into 6-8 inch sticks for agarbattis sold at the weekly market three km from his village. But the state's tribal affairs minister, Jitendra Chowdhury, was quite nonchalant. "There is no lack of bamboo and we need not worry," he said.

The state did start a few bamboo nurseries, some years back. But that self-help group-based programme was wound up due to disagreements with the partner, inbar. The entire plan to utilise bamboo is now being redrafted. The industries department has replaced the forest department as the agency in charge -- just as in Mizoram -- and the turf war between the two has already begun.

Yet as per the status report it submitted to the moef, the state government has committed that extraction of muli "would be done by engaging local tribals and rural poor and will be supplied to hpcl or exported to Bangladesh". The state government also promised that "the possibility of setting up of a bioenergy unit with muli bamboo as feed stock will also be explored". The promises remain on paper. The local media tom-toms that a new common facility centre (cfc) in Kwaifaung village in South Tripura district has begun producing bamboo slivers. But a visit by Down To Earth revealed only a derelict shed. The unit had no power; even the forest department was oblivious of the machines it was supposed to run.


The cfc was to draw local artisans towards mechanised methods of bamboo processing. But convincing artisans to leave their old methods -- and homesteads for an alien environment -- requires much more than new machines and a ten-day training programme.

The development commissioner (handicrafts) of the Union ministry of textiles, however, believes the cfc is just what the northeast's bamboo economy needs. 12 such centres have been set up in the Northeast. Of course, baring a couple, the rest lie idle. In Shillong, Meghalaya, standing in the decrepit backyard of what was earlier a watch factory, Mendon Pariat, director of the Meghalaya Handloom and Handicraft Development Corporation, shows the idle cfc machinery. "Only two machines worked. The rest could simply not work the bamboo here. People here make sliver only out of the outer layers of bamboo, but these machines would only work on the harder insides. People did come for training sessions, but they never came back to work at the centre." The situation, says an expert who has been working with the Union government on the new National Bamboo Mission, says is true for other places such as Barpeta in Assam and Ziro in Arunachal Pradesh as well. Ad hocism runs rife.

But even if northeast India does get a mother industry that adds value to the first-level processed bamboo, creating smooth supply channels will not be easy. Inderpal Singh of Timpack industries, in Byrhnihat, Meghalaya, which has just started making corrugated sheets of bamboo mats, sums up the problem, "When we decided to set this factory up, we were told that people here produce more than 20,000 mats daily. But I cannot get even 5,000. So, today only particle boards are produced in the factory. This unfortunately means that we only want raw bamboo from local people -- not mats, for which they would have got a higher value".

Each state about to be affected by bamboo flowering in the northeast seems to be floundering into its own dark alley. Presently, muli flowering portends serious economic and social unrest in Mizoram, an equally debilitating threat in Tripura and a lost opportunity in most others. Part of the blame for this confusion goes to the Rs 2,600 crore National Bamboo Mission for Technology and Trade Development, planned in 2002 just won't take off.