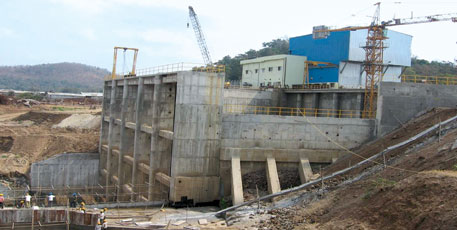 In 2004 when the Andhra Pradesh government launched Jalayagnam, the mega irrigation programme was touted as a solution to the agrarian crisis in the state’s drought-prone and backward regions. It was also pitched as a programme that would bring relief to the power-starved state. But going by a draft audit report of the Comptroller and Auditor General of India (CAG), it seems Jalayagnam, launched ahead of the assembly polls that year, was an election gimmick of the then Congress government of late Y S Rajasekhara Reddy.

The state neither has enough funds nor water to implement the Rs 1,86,000-crore programme, according to the draft CAG report. Jalayagnam envisages 86 irrigation projects mainly on the Krishna, Godavari and Pennar rivers and their tributaries, and aims at providing drinking water to one-fourth of the state’s 80 million population and irrigation to more than half of the state’s rainfed areas. It assumed the importance of a dream project in the backdrop of the fact that more than half of the state’s cultivated area is rainfed. Over the years, there has been sharp increase in groundwater exploitation, especially in the Telangana and Rayalaseema regions that receive scanty rainfall. 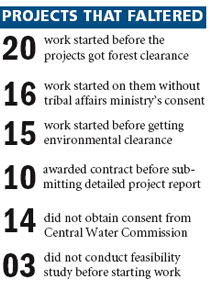 But most of the projects were taken up without carrying out feasibility studies, settling inter-state disputes or obtaining necessary clearances (see ‘Projects faltered’), says the draft CAG report. “It appears that Jalayagnam was largely driven by the urgency to award contracts rather than focusing on immediate benefits to targeted beneficiaries,” it says.

Although 12 projects are said to have been completed under Jalayagnam by January this year, they were actually ongoing projects incorporated into the programme. None of the projects were providing water to farmers when CAG prepared the report, despite claims by the government that it has created irrigation potential for 849,000 hectares. Although the government had promised to complete Jalayagnam in five years, 74 projects are still under construction; 49 of them are far from complete. This is despite the fact that the programme received Central assistance of Rs 4,015.26 crore for 22 projects.

The CAG report says the programme is weighed down by ill-planning, which could render it ineffective.

Planned on unavailable water: No comprehensive study was done on the availability of water for Jalayagnam projects. The CAG audit revealed that the water required for successful implementation of the projects on the Krishna and the Pennar is far more than the water allocated to the state (see ‘Overambitious’). The water allocated to the state is already being overdrawn by existing projects. The government planned Jalayagnam projects on the rivers saying it would utilise flood water. But then flood water is available only for a few days—around 30 days in the Krishna—in a year and cannot satisfy the projects’ demands. Several projects, for instance A V R Handri Niva Sujala Sravanthi and Jawahar Nettampadu lift irrigation Scheme on the Krishna, are technically unviable. Projects like Indira Sagar Dummugudem on the Godavari, too, do not have assured water availability, points out the report.

Not enough power: Thirty-one projects under Jalayagnam are lift irrigation schemes where water needs to be lifted from the rivers by use of motors and pumps, which would require about 206 million units of electricity a day. This is when the average power consumption of the state was 160.80 million units a day in 2009-10. This means even if power supply for the entire state is shut down and diverted for the lift irrigation schemes, there would still be a shortage of 44.2 million units a day. The state will thus not be able to operate the irrigation schemes, notes the report. Being a power-deficit state, Andhra Pradesh purchases power from independent power producers at high rates. Even at the minimum Rs 2.60 per unit, the total funds required for the schemes would be Rs 5,533.58 crore a year, it adds.

Benefits inflated to suit contractors: The benefit-cost-ratio (BCR) has been inflated for many projects, says the report. This includes Jalayagnam’s most expensive Pranhita-Chevella lift irrigation project on a tributary of the Godavari. It aims to provide water to seven districts. BCR for the project was worked out based on assumptions, not facts.

The report notes that Jalayagnam appears to be driven by awarding a large number of contracts, without any assurance on completion of works within the envisaged time and budget. The contracts were awarded to favour contractors, putting the state’s interests at risk. “In most cases, the technical sanction was obtained after the bidding, clearly pointing to the possibility of manipulation in favour of certain bidders.” Firms that were not qualified for bidding entered through back doors. CAG’s audit also revealed that parties in joint venture (JV) firms changed their partners several times to form new JVs to bag contracts. In the Pranahita-Chevella project, four firms obtained 16 contracts worth Rs 22,885 crore by forming JVs in 16 different combinations.

High on aspirations, low on funds: The state government started implementing all Jalayagnam projects simultaneously without assessing the availability of funds. As a result, the programme has put huge financial burden on the state. As of April 2011, the state incurred a liability of Rs 1,27,084 crore—87 per cent of the state’s budget for 2012-13. Besides, the government is yet to adequately compensate and rehabilitate the 131,000 families, including indigenous people and farmers, displaced by the projects.

“...the government is saddled with a huge number of projects which are nowhere near completion. The financial burden of these incomplete projects on the state exchequer will be felt for a long time to come,” notes the report. Instead of taking up 86 projects simultaneously, the government should have prioritised projects over medium to long term and focused its attention on a few projects, ensuring that adequate resources are allocated and the projects are implemented properly, observes the report.

The state irrigation department is now in the process of proposing changes in the draft report and preparing explanations to the charges raised in the report. “The draft report has made sweeping statements without going deep into ground realities,” says S K Joshi, principal secretary with the irrigation department. “CAG believes in a step-by-step process whereas the government believes in a parallel process. The government is keen to see that farmers in rainfed, drought-prone regions get irrigation facilities fast, he says. Refuting the allegations regarding inter-state disputes over Jalayagnam projects, Joshi cites the recent agreement between Andhra Pradesh and Maharashtra for Pranhita-Chevella project. He hopes the final CAG report will include the proposed changes.