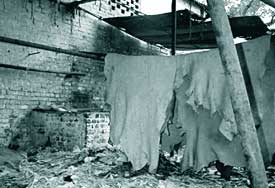 On January 15, 2005, 23 leather tanneries in Kanpur's Jajmau area were 'temporarily' closed. They had failed to install chromium recovery plants. The closure was part of a Uttar Pradesh pollution control board's (uppcb) 'crusade' to prevent pollution of the city's water bodies. But a visit to Jajmau, which produces 12 per cent of the country's leather, reveals the step is a mere sham. Indeed, it is one more malady caused by the Union government's ambitious Ganga Action Plan (gap) . This programme was launched to clean up river Ganga; it has only increased pollution in 20 villages near Jajmau. The scale of mismanagement in gap is alarming; more dangerously, every new fact of unabated pollution is simply denied.

Despite gap, raw effluents rich in chromium used to colour leather, and other toxic pollutants, are freely dumped by many of Kanpur's 350 leather tanneries into river Ganga. gap's contribution to pollution is widely felt by the people:"Before the launch of gap, Kanpur Nagar Niagm supplied the villages river water mixed with sewage in the ratio 3:1 for irrigation; sewage is rich in nutrients and helps increase the yield. But this was stopped post- gap and the government started supplying treated effluent and sewage with very little river water mixed in it," complains B P Vishwakarma of Shekhpur village.

An indicator of the crisis is the common ailments suffered by people in villages near Jajmau: diarrhoea, worm infection, dysentery, cholera, skin diseases, tumours, mental retardation, spontaneous abortions, tuberculosis and leprosy. A few people also suffer from cancer. Studies conducted by the us Environmental Protection Agency indicate that chromium can be the cause of many of these, including cancer.

gap was implemented in Kanpur in 1985. After more than Rs 67 crore spent, the Ganga is more polluted than ever before. A study by the Indian Institute of Technology (iit), Kanpur, shows that the biological oxygen demand (bod) of the water downstream of Kanpur increased from around four milligrammes per litre (mg/l) in 1988-1991 to over 16 mg/l in 2001. bod should not exceed three mg/l of water, according to Central Pollution Control Board (cpcb) standards.

But officials view the matter differently. " bod has always remained within limits, both after and before gap. You cannot say that gap has failed: the population has increased drastically and so has the sewage load. The infrastructure created under gap was meant for lesser amount of sewage," argues R C Trivedi, additional director general, cpcb. K C Sahu, project manager, Ganga Pollution Control Unit, up Jal Nigam, claims: "We have utilised the available funds properly to ensure that not even a single drop of pollution enters the river."

These claims ring hollow. Lack of electricity has rendered dysfunctional the infrastructure set up under gap's first phase. Thus, despite four intermediate pumping stations along the Ganga (see map:Dead infrastructure) intercepting and diverting the waste to the main pumping station, over 60 per cent of Kanpur's 360 million litres per day (mld) sewage and 9 mld effluents are dumped into the river. Some tanneries have even bored holes in their premises, and dump the waste directly into the city's aquifers, Shekhpur villagers allege.

Also, the waste that reaches the treatment plants from the main pumping station is ill managed. "The plants rarely function due to power failure," says Padma S Vankar, senior project scientist, facility for ecological and analytical testing (feat), iit, Kanpur. Result: sewage and effluents rich in hexavalent chromium, a known carcinogen, is supplied for irrigation. Such occasional functioning also means the chromium-rich sludge is dumped carelessly. "The Common Effluent Treatment Plant (cetp) is not equipped to deal with chromium. It is not our problem," declares Ajay Kanaujia, chief chemist of the cetp, one of the three treatment plants in the city.

In fact, the latest closure of tanneries was triggered by a requirement of this cetp that chromium and other heavy metals be recovered and recycled at the tanneries. But the idea failed. "Why should we install chromium recovery plants when we have borne 17.5 per cent cost of the cetp?" questions Akhtar Hussain of Makhdoom Tanning Industries, Jajmau.