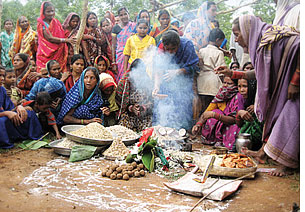 As the summer draws to a close, there is a distinct gaiety in most parts of Orissa. There is a spring in the steps of people as they go about preparing for the Jagannath Utsav. In Majhiakhand village of Nayagarh district, a group of people have been assigned the task of taking care of a basket full of earthen balls. A few months ago, the village's women had got together to knead a mixture of ant-hill clay, cow dung and cow urine into egg-shaped balls.

The dried balls will be broken open during the Snan Ucchab (the bathing festival) of the Lord Jagannath and seeds of siali (Bauhinia vahili), preserved inside them, taken out. The

women of Majhiakand might not be aware of the ecological jargon ascribed to this activity. But environmentalists say this is an organic method to preserve biodiversity. On the Snan Puja day the seeds are sown and prayers offered for the healthy growth of siali climbers.

The colourful ritual has a significance which extends far beyond annual festivities. Siali and sal (Shorea robusta) leaves are the major source of sustenance for people in the predominantly tribal districts of eastern Orissa. "Trade in these leaves has saved people in Mayurbhanj district from starvation deaths," says Kalyan Prasad Sinha, a journalist from Baripada.
At dawn women set out for the forests. They are there till afternoon, carefully selecting leaves that would be stitched the next day to make plates. A day's collection usually comes to 1,000-1,200 leaves, enough to make 150-200 plates. The plates are dried the next day, by which time traders' agents are at the collectors' doorsteps. Though the government has fixed a price--a packet of 80 plates is Rs 24--there is some haggling. Eventually, the collectors give in to the agents.

The plates are carried off to Orissa's two main centres of the leaf plate trade in Betanati in Mayurbhanj and Rupsa in Balasore. Here the business acquires a ring of secrecy. Truckers transporting the products to retail markets in different parts of the country are likely to give you a fierce glare if you ask them about the volumes in their charge. A similar query to a trader may elicit a spiel on falling profits. The trade is unorganized, but according to conservative estimates, Orissa does Rs 400 crore of business in siali and sal leaves every year.

The traders say profits have fallen since 2005 when the government imposed a royalty of Rs 60 per 100 kg on sal leaves--there is however no royalty on the siali leaf trade. But market observers say traders have passed on the burden to the primary collectors. Orissa government officials are, however, dead sure of the fairness of the business. A senior official of Orissa's forest department says, "The prices are fixed by the state government and traders cannot cheat the collectors".

The collectors don't buy this argument. "A large number of families are dependant on leaf collection, so we have no option but to keep prices low. Storage facilities could have helped. But there are none," says a collector from Chandua village in Mayurbhanj district. "Transportation costs are high. It's beyond the means of the primary collectors to take their produce to the wholesale market. Traders take advantage of this," says Nabaghana Ojha, senior programme officer of the Bhubaneswar-based research and advocacy organization Regional Centre for Development Cooperation.
Some environmentalists allege that with the increasing demands on the collectors, many of them have taken to ways that harm the trees. Things were fine till leaf collection was confined to hamlets within or close to the forests. But now collectors from far off villages come for sal and siali leaves. Many aren't that careful. Environmentalists allege that branches are wrenched out, causing irreparable damage to trees.

Puspanjali Satpathy of another research and advocacy centre, Vasundhara, refutes these arguments. "People take good care of the trees since these are critical to their livelihoods," she says. Besides, the government allows collection of leaves for only four to six months, allowing the trees sufficient time to regenerate.

Environmentalists, however, say that there is no scientific basis to this government moratorium. It also doesn't help that there has been no study that looks at the ecological aspects of the leaf-plate business.