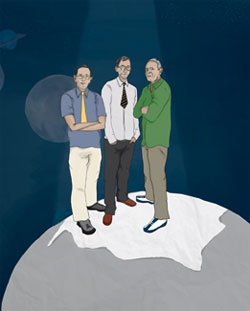 Try punching the air in front of you. Does it leave a hole? Surely not. But the ozone layer that exists in the stratosphere, the layer of the atmosphere just above us, does have a hole.

Not quite technically perhaps. But in May 1985, Joseph Farman, Brian Gardiner and Jonathan Shanklin, scientists with the British Antarctic Survey shocked the world when they announced an enormous thinning in the ozone layer over Antarctica—the Ozone hole.

Their data suggested that chlorofluorocarbons (CFCs)—used in air conditioners—were to blame: atmospheric conditions during the cold, dark, Antarctic winters were building stockpiles of CFCs over the South Pole.

The world went into action. Two years later, the Montreal Protocol banned CFCs. Today, according to the United Nation Environment Programme (UNEP) CFCs are second to drugs as the most smuggled commodity in the world.