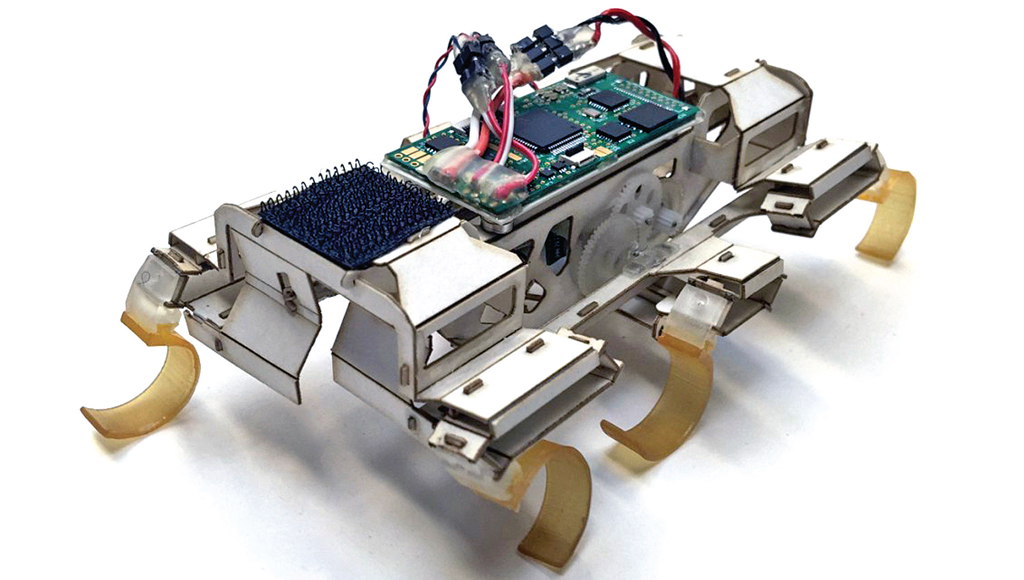 Cockroaches are known for their special ability to slip through some of the narrowest gaps, and this superior maneuvering skill can be attributed to their discoid body shape. Recently, scientists from the University of California in Berkeley, USA, employed the special characteristics of the body shape found in cockroaches to design robots. Normally, robots are fitted with special sensors to detect obstacles. However, the terrestrial paths can be cluttered, making it difficult for them to pass through. The scientists studied the round body shape of cockroaches which aids them in traversing through obstacles by rolling their body to one side and pushing through the gaps with the help of their legs. The scientists fitted robots with cockroach-inspired round body shell. They hope the robot’s design can be used to construct terrestrial robots for different scenarios such as monitoring the environment, and search and rescue operations.

The technology mimicking cockroaches is just one among many innovations scientists are adopting through inspirations from nature. In fact, there is a field solely based on inspirations from nature called as biomimetics. The products of such research find application in the field of engineering, material science, nanotechnology, medical science, robotics and the military.

According to the Da Vinci Index, introduced in 2010 by the Fermanian Business and Economic Institute in San Diego, USA, there has been an 11-fold increase in the occurrence of biomimicry in research circles between 2000 and 2011 and its growth remains uninterrupted. The Da Vinci Global was launched to track biomimicry progress globally. This index assesses the impact of biomimicry in the US by measuring the use of terms specific to biomimetics in scientific publications, patents and grants.

It is estimated that bio-inspired innovations could account for about $425 billion of US GDP by 2030. It could create two million jobs in the US alone.

A few months ago, scientists built a bomb detector inspired by butterfly wings. A team of scientists in GE labs, USA, announced they had built radio sensors that could detect chemicals and explosives. The device comprises a special film, which is a 10th the thickness of a human hair, to spot chemical compounds. The scientists drew their inspiration from the jagged structures on the wings of the Morpho butterflies. The small sensors can be placed as a sticker on packaged goods. They cost a few cents to produce, and consume 100 times less power compared to the desktop detectors found in airports.

Scientists at the University of Akron, USA, are researching the use of biomimetic antennas to increase communication speed in smart phones and to reduce the size and power consumption of the phone. These biomimetic antennas are inspired by the ear system of a parasitoid fly, Ormiaochracea, which has one of the most sensitive auditory systems in the animal world. The team is testing the antennas and plans to incorporate multiple antennas in the system to increase data speed. Ardalan Alizadeh of the University of Akron says, “Our findings could go a long way in managing the challenges of limited bandwidth in the future.”

In 2013, scientists at Syracuse University, USA, drew inspiration from fireflies and developed a new lighting device that uses absolutely no energy. The technology is based on ‘Bioluminescence Resonance Energy Transfer’ found in fireflies that glow in the dark due to the presence of certain chemicals. The mechanism found in fireflies has been replicated in LED lights leading to power savings.

Biomimicry is gaining ground as a sustainable pathway inspired by nature. Seema Anand, a biomimicry specialist, and co-founder, Biomimicry India Network, says, “Our connection with nature drastically reduced after the industrial age and with rapid urbanisation. Though an ancient practice, it is an ‘emerging discipline’ today.”

Biomimetic may sound ideal. However it has its own challenges. “The general challenge in the design of biomimetic materials is that they are usually very hierarchical materials,” says Jan-Henning Dirks, a scientist and professor at Max Planck Institute for Intelligent Systems in Stuttgart, Germany. “Thus, to get the full benefit of their properties, one often has to understand and reconstruct many levels of detail—from the molecular level up to the structural level.”

Despite the challenges, scientists are continuing to research nature like never before. One of the latest trends in biomimetic material research is self-healing and adaptable materials. These materials can repair small damage or change their mechanical properties depending on the load they experience. They are capable of mending cracks. “Though biomimicry innovation holds enormous potential for the global economy, it still has a long way to go before the industry realises its potential,” opines Anand.

“People across the world are not yet familiar with the idea of looking towards nature to solve emerging human challenges, “ she adds.