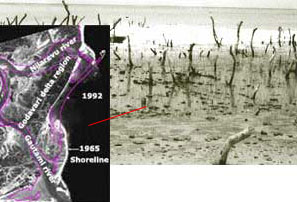 large-scale construction of dams is preventing sedimentation in delta regions, in turn making it easier for the sea to advance and encroach on pristine ecosystems. This is what researchers at the Andhra University, Visakhapatanam, have found. The most devastating outcomes of this phenomenon are displacement of coastal communities and destruction of precious mangrove forests.

Working in the delta region of the river Godavari -- a pristine coastal ecosystem, called the rice bowl of Andhra Pradesh -- researchers gathered clinching evidence of how damming the river in the last few decades has led to very low levels of sedimentation, which underpins land formation in the coastal areas.

B Hema Malini and Kakani Nageswara Rao studied the sediment flow of the river over three decades (since 1971) with satellite images and data. They found the flow has drastically fallen: from an annual average of nearly 145 million tonnes in 1971-79 to about 57 million tonnes during 1990-98. "Most of the harm happened in the late 1990s," says Rao.

There are two types of sediment a river carries. The first are suspended sediments, nothing more than soil particles distributed uniformly throughout the flowing water; the second are the bed loads (heavier and coarser grains), deposition of which on land leads to the much-desired sedimentation.

Once a river is dammed, the bed loads get deposited in the reservoirs, and only suspended sediments reach the delta region. Also, waves, tides and currents of the sea constantly chip away at sediments already deposited along the shoreline of the delta regions. The effect is a negative net land balance.

Godavari falls into the Bay of Bengal through four distributaries: Gautami, Nilarevu, Vasishta and Vainateyam. The researchers compared satellite maps of the mouths of these distributaries, taken 1992 to 2001, with a 1976 topographic map of the region. They found that the shoreline changes and consequent destruction were conspicuous, particularly for the first three distributaries. For instance, mangrove vegetation near the mouth of the Nilarevu, shielded from waves by a sand ridge acting as a wall till 1976, is now being devastated by undesired levels of seawater. The mangrove forest in and around Kakinada(an area not far from the mouth of the Gautami) covered an area of 200 sq km two decades ago; now it occupies only 140 sq km.

Humans too get displaced. In 1992, all of Biyyaputippa village had to be evacuated; the shoreline near the mouth of the Vasishta had receded by almost two kilometres in less than two decades. Recently, another village -- Chinamailavanilankha -- succumbed to the seawater.

Indeed, sea intrusion here has taken on colossal proportions. Union ministry of water resources data show that the storage capacity of dams and barrages along the Godavari has increased by 12 times since independence. The capacity has increased from 1.6 cubic kilometres (cu km) during the pre-independence era to 19.5 cu km by the turn of the 20th century.

The situation is bound to aggravate, with more dams being constructed. "While dams are unarguably necessary for irrigation and electricity generation, there should be adequate provisions to allow the water to pass through the reservoirs along with the bed loads at least during the peak flow season," aver the scientists. Such changes in dam designs will have one more benefit: maintaining the reservoir capacity, which is otherwise reduced due to siltation.