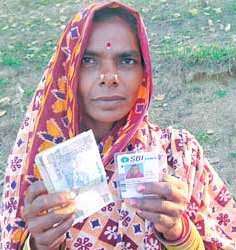 While pilot projects have been more or less successful in states, the problem arises when scaling up or implementing projects across states is talked about. It is not clear who will pay, the Centre, the state or the banks.

The rbi’s move of no-frill savings accounts (that require a minimum or no balance) has failed to make the desired impact because the accounts, on an average, have only Rs 30 to Rs 50 as balance,” said Umesh Kumar Singh, deputy general manager of Central Bank of India in Mumbai. “This is not viable for any bank,” he added.

rbi has also allowed banks to charge a maximum transaction cost of 2 per cent for mnrega accounts from the state government, but states like Rajasthan and Orissa do not want to share the burden.


Only Andhra Pradesh is paying this fee.

“Banks are trying different financial inclusion models. But, nothing will work unless it is viable for all stakeholders, including the business correspondents,” said Singh (see box: Fault lines). “The money also needs to be routed in the right direction,” he added.

A financial inclusion model, such as the sbi initiative in Cuddalore, needs to be economically viable and self-sustaining for upscale, said Rajendra Ratnoo, former collector of Cuddalore district who launched the sbi  pilot. “The atm  centres could be converted to kiosks where the government can run its common service centres, and allow entrepreneurs in the village to set up stores, and sell sim  cards and recharge coupons,” he added.

Going back to the Orissa example, the sbi pays Rs 2,000 per customer service provider to its business correspondent.

The customized mobile phone costs Rs 25,000, which the customer service providers bear. The question is would this be viable in the long run. Then there is staff crunch to deal with.

The bank though is hopeful that their inclusion plan would work in the long run. “We are not making any profit now. The returns will start flowing in three to five years when we start handling non-government transactions such as recurring and fixed deposits,” said an sbi  official who did not want to be named. “We are also encouraging other well-to-do people in the villages to open savings accounts,” he added.

Sudhakar Panda, economist and member of Orissa State Farmers’ Commission, agreed that things were tough for the bank because of the financial model. “It might work out once the bank is able to develop saving habit among people,” he added. Experts say these are only teething problems.

To take care of the technology cost, the Centre has constituted the Financial Inclusion Fund and Financial Inclusion Technology Fund. Each of these funds, with an initial corpus of Rs 500 crore, is under the National Bank for Agriculture and Rural Development (nabard).

According to Singh the challenge is to route the money in the right direction. After two years of research into the existing financial inclusion models, the Central Bank of India proposed a new model (see: Interview). He also sees endless possibilities in mobile phones. Banking through mobile phones can offer a low cost channel, as the penetration of mobile phones is high, he said. “Against 450 million mobile phone connections in India, there are only 120 million bank accounts. It costs anywhere between Rs 90 and Rs 120 to issue one smart card; but mobile phone is an existing connection,” he added.

Financial experts are also calling for the launch of a ‘national rural financial inclusion plan’ under a mission mode. The plan should target to provide access to financial services, including credit, to at least 50 per cent of the financially excluded rural households by 2012. The remaining should be covered by 2015.

Banks might also be mandated to bear the cost of universal financial access as part of their business obligation. Alternatively, they could contribute a percentage of their turnover to a ‘Universal Financial Access Fund’ under the mission, the Skoch report recommended.