Junked aeroplane tyres are being used on camel carts in Rajasthan, making life easier for both the villagers and the animals 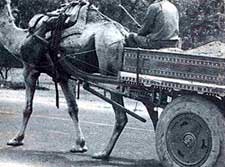 WHERE do used aeroplane tyres go? Well, at least some of land up in the most unlikely place: the Rajasthan desert. Tyres that once helped giant flying machines to land and take off are being used on camel-carts to transport fodder and water in the desert.

The virtual absence of wooden-wheeled carts in Bikaner district is indicative of how popular second-hand aeroplane tyres are. And, it is not difficult to see why.

Explains Manga Ram of Palana village in Bikaner district, a user of jet tyres, "These tyres are about 0.4 m wide and are not treaded, so they move faster on sand. Because they are thick, a load three times higher than that of traditional carts can be carried. Their large size also enables camels to cover longer distances with much less strain." Ram says his camel has pulled his cart for 12 years without falling ill or getting injured. He also claims there has been no significant decline in the camel's work potential.

S N Tandon, a veterinarian at the National Research Centre on Camel (NRCC) in Bikaner, agrees that less effort is required to pull carts with jet tyres. Tandon says camels pulling traditional carts can carry loads of up to 1,000 kg, but they "are under tremendous strain and lose their strength in about eight years." According to NRCC scientist Ashutosh Kumar Roy, a one-humped camel can cover 32 km in 8 hours with a 180-kg load on its back and more than 900 kg on the cart with jet tyres.

The Palana villagers get used tyres from dealers who buy them at auctions. Rims are the most expensive part of the second-hand aeroplane tyre package, which consists of two tyres, rims and a hub. Recalls Manga Ram, "About 20 years ago, rims cost me Rs 2,000 each and the tyres Rs 1,600 each, but they are still in good shape and may last another decade."

But local retailers have started producing rims. Notes Bikaner assistant district magistrate P R Pandat, "They have begun to make rims and hubs using scrap iron and tin sheets." Although the local substitute costs between Rs 400 and Rs 800, it does not last long. Even locally retreaded jet tyres do not last more than four years. Describes Bajju Kushwaha, a cart-owner of Bikaner, "I change the rims once every two years and the tyres once in 15-to-18 months because mine is an overworked commercial cart that runs mostly on metalled roads."

Local ingenuity extends also to bidding strategies at tyre auctions. For years, big junk-dealers from Delhi and Jodhpur monopolised the used-tyre market. Explains Sunil Gavaskar, one of Bikaner's used-tyre wholesalers, "The breakthrough came when five of us bid jointly and cornered 20 per cent of the tyres auctioned in 1989."

Demand for used tyres picked up over the past five years. Says retailer Amin Mohammed, "My monthly sales are about 600 tyres, with each tyre costing between Rs 500 and Rs 1,200, depending on size and quality."

Used jet tyres are now integral to the livelihood of Bikaner's farmers, but how they first came to be used on camel-carts remains a mystery. Recalls Manga Ram, "About 20 years ago I saw a camel-cart with big tyres in Sujangarh block of Ganganagar district. I found out that it belonged to a farmer whose son, an army officer, had brought them from Jodhpur without any specific purpose."

Whatever its origin, second-hand jet tyres have lent a new speed to life in the desert villages. It is indeed a tribute to the ability of Indian villagers to adapt and meet their technological needs.