People were not consulted, officials say they don’t know about it 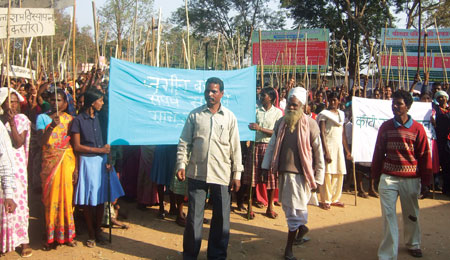 It took the Jharkhand government a murder, an abduction and angry protests to stop construction of a dam that began in a tribal heartland without informing people whose land was acquired.

The dam will submerge 365 hectares (ha) of about 100 families. As per rules, any acquisition is preceded by a land survey by the authorities, notification to people who may get affected and finally, fix the compensation amount. People can place their grievances once notified about it. The gram sabha of Jabra, a tribal village, must also give its assent for the dam’s construction. But the government did not attempt to get any.

The authorities approved construction of a dam on the Chata river at Jabra village in Karra block of Khunti district. But Triveni Engicons Private Limited, the company that bagged the tender, did not follow procedures before starting the project. Unsuspecting people got a rude shock on December 10, 2010, when they saw vehicles driving onto their land and contractors performing bhoomi pujan, a ceremony that marks the beginning of a construction. Soon, heavy machines trooped in and construction began.

Angry over forced acquisition of their land, people staged several protests. What followed next was arrests by the police and abduction of two persons. Bindyachal Gupta, a contractor’s workman, was released the next day, while Bijay Dhan, a Jabra resident, was found dead. That’s when government decided to stop civil work. “The problem is that contractors started work without taking people into confidence,” said Khunti district collector Rakesh Kumar.

“They tried to get their work done without following procedures. Work should not have started as the revenue department’s land acquisition cell has not conducted survey,” he added.

When activist and freelance journalist Dayamani Barla raised the issue with the Block Development Officer, he said he had no clue about the project. Replying to a Right To Information (RTI) query in February 2011, the water resources department said the project did not fall under its purview. In a letter dated August 29, 2008, the department granted Triveni Engicons permission to start construction.

Barla, who also runs a non-profit Dam Prabhavit Sangharsh Samiti, filed three more RTI applications—with the state water resources department, its Khunti district office, and the land acquisition cell of the revenue department. All three replied the project was not under their purview.

This medium irrigation project aims to provide water to 24 villages. The 12-metre high dam would irrigate 3,062 ha of kharif crop and 1,924 ha of rabi crop.

To facilitate its work, Triveni Engicons on its own compensated the affected villagers, said Govind Agarwal, managing director of the construction company. “A lot of noise is being created because activists are now involved in it. The land is barren. Only a few hectares (6-8 ha) that will be taken for canal construction is fertile,” he added. Further, the company has been conducting surveys for the past one-and-ahalf years and people know about the project, he claimed.

Residents of Jabra, however, deny this. “No family was informed about the proposed acquisition of land. We want government’s intervention, else we will fight for our land. The forceful acquisition will leave several families landless and hungry,” said Anil Dhan of Jabra village.