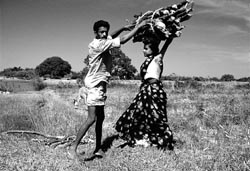 The Agricultural Development and Training Society (ADATS), has been leading more than 14,000 coolies (landless labourers and poor farmers) towards sustainable development in 691 villages of Bagepalli taluk (province) in Kolar district of Karnataka since 1977. The society aims at building up a mass agricultural labourer organisation with which coolies can identify. "Now we have more cultivable land and get employment all through the year. We are able to cultivate groundnut and other highly-valued crops because of loans from our sangha (organisation)," says 50-year-old Narasamma, one of the coolies, about the difference ADATS has made to his life. The programmes have been extended to three more taluks in this semi-arid district.
ADATS follows a time-bound assistance strategy, which proceeds in three phases: formation, formalisation and withdrawal - each phase spanning three years. The inputs for various projects gradually decline from the formation to withdrawal phase. In the formation stage, ADATS staff lives in villages to build Coolie Sangha Units (CSUs). ADATS provides legal aid, cadre training, adult literacy and community health services to the coolies and builds the social and physical infrastructure in the villages through the everyday activities of CSUs.

In the formalisation stage, ADATS withdraws paid staff and works through village-level workers and village health workers selected by the coolies from among themselves. Though inputs in this stage are mainly material, ADATS strives to promote grassroots democracy and decentralisation of budget.

In the consolidation stage, ADATS prepares for total withdrawal, handing over all responsibilities to elected representatives of CSUs. Larger policy-making, advising, monitoring and coordination functions are performed by taluk-level coolie organisations. Only one family member can join the CSU, but benefits like loans from the credit fund and medical aid are available to all family members.
ADATS has been implementing a massive dry land development project (DLDP) in the Kolar district from 1986 for five summer months every year. In 1995, the project was undertaken in 210 villages in four taluks.

The DLDP was implemented in a participatory manner. The coolies themselves identified land development activities at the family level and performed them for wages which were substantially higher than those prevailing in the village. As a result, a majority of the farmers have achieved up to 25 per cent increase in cultivable land while three per cent of them could double or even triple the area under cultivation. Member coolies were also given employment in the DLDP during the lean season. These incentives effectively curbed the migration of labourers.

The coolies were not left to their own fate afterwards. In the second phase of DLDP, members were provided credits through the coolie credit fund (CCF). CCF was essential because so long as coolies depend on rich peasants for credit, any effort to organise labourers would prove futile. By November 1995, the CCF had Rs 314.54 lakh, which has been given as grants to 691 CSUs at various points of time by ADATS.

Withdrawal from projects is one of ADATS' objectives. It has already withdrawn from 75 CSUs in Bagepalli taluk. But will the CSUs sustain in the future? The CSU in Bagepalli finds it difficult to fund financial resources required for some personnel and programme activities. The president of CSU in Bagepalli taluksays, "Members are not able to think of any non-traditional income generation activities. We want ADATS to help us in this regard. It can also help us get funds from some other agency." This suggests that even after more than 15 years of intensive development inputs, CSUs are unable to become financially self-sufficient. The withdrawal process is proving to be more difficult than initiating development.