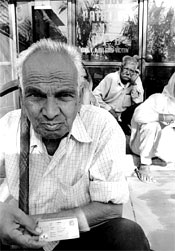 As the Bhopal tragedy enters its twentieth year, the Indian Council of Medical Research (ICMR) has identified the country's newest disease: the Bhopal Gas Disease. Down To Earth has exclusive access to an unpublished ICMR document which defines the disease as "a condition of ill-health due to exposure to Bhopal's toxic gases." About half a million people in Bhopal suffer from this disease, which has forty symptoms ranging from low backache to breathing difficulties. The treatment has merely served the symptoms. This is all ICMR has to show out of 10 years of research on 84,000 victims. After spending a further nine years in reviewing its work, ICMR has not published it.


"The exact causative agent of the Bhopal Toxic Gas Disease is unknown," says the unpublished ICMR document. How come? For one, the Union Carbide has used trade secrecy as a prerogative to withhold information on the exact composition of the leaked gases. This played a big part in styming research. Secondly, the ex- CSIR director Vardarajan committee report submitted after analysing the residues of tank 610 of UCIL remains the only guideline for research. The report -- submitted immediately after the disaster traced 12 different chemical components of MIC; another 11 elements were identified by the ICMR study.

In fact, according to a chemical engineer who has worked at UCIL, MIC reacting with water at high temperatures (what happened at Bhopal) may release up to 300 highly toxic chemicals. What little knowledge the world has about MIC's toxicity is based on exposure of pure MIC to animals. It is meagre; the Vardarajan commitee makes a helpless observation, "The main difficulty in making comparisons with other experimental studies on MIC is that these were based on animals' exposure to gas. But in Bhopal people were exposed to a number of gases, including MIC." That was in 1987. No further know-how has emerged.

In the aftermath of the gas leak the ICMR was asked to undertake 24 research projects on its long-term effects. But, all these, except the one to monitor cancer among gas victims, were summarily terminated in 1994. Rationalises, Sameer Khare, director, department of Bhopal gas relief and rehabilitation, government of MP, "With the gas not there in the atmosphere, there was no need to continue research."

The government belabours to prove all is normal. According to Khare, "Only five to seven per cent patients coming to hospitals suffer from exposure-related diseases." Belying this claim are figures which show that the incidence of common diseases in affected areas is double than that in non-affected areas. (see graph: People still suffer) The quantum of patients has also increased. In 1985, 2584 patients visited out patient department of government hospitals every day, going up up to 4,230 in 2002.

According to an affidavit submitted by the ICMR in the Supreme Court, the decision to terminate the research was taken after an evaluation of the results. But contends S Sriramachari, former director, Institute of Pathology, ICMR, "The decision was administrative and not based on researchers' advice." Says V R Dhara of the Emory Eastside Occupational Health Center, Snellville, Georgia, USA, "If ICMR had problems in analysing data, it could have consulted international bodies such as the WHO. Dhara, who has worked extensively on the victims says, "It is quite possible that the ICMR might not even be willing to publish the results as it was under pressure."

After the projects were terminated, the ICMR abdicated all responsibility of research to the MP government's Centre for Rehabilitation Studies (CRS). CRS has so far done only epidemological studies which compare morbidity in affected areas with that in non-affected areas. Says N Banerjee, officer in charge, CRS, "The CRS data is useless unless used for future research." "What we have are observations, and not scientific studies that pin-point reasons for health problems," says Rachna Pandey, former ICMR investigator. Since the ICMR data is not freely available, there is a complete divergnce between research and the treatment. According to activists such as Abdul Jabbar of the Bhopal Gas Peedit Mahila Udyog Sangathan, the government has forgotten the basics of health care. "How can good treatment be provided unless a proper classification of diseases is done?" questions Jabbar.

While the ICMR has washed its hands off Bhopal's victims, the few studies done by independent agencies indicate that Bhopal is in severe health crisis. In October this year, a study, carried out by the NGO Sambhavana Trust compared adolescents exposed to the gas with ones who had not been exposed: the former had lower anthropometric features such as height, weight and body mass index.

The same organisation carried out research on girls aged 13-19 during 1999-2000. 64.19 per cent of respondents had menstrual problems. Another study by the International Medical Commission-Bhopal (IMC) -- a committee of 14 experts from different countries -- in 1996 showed that fever episodes, adverse outcomes of pregnancy and respiratory, neurological, psychiatric and ophthalmic problems were higher in those exposed to the gas.

Cancer is very common amongst the affected. But the government prefers to links it to habits such as smoking. Contends, Shyam Agrawal, director, Navodaya Oncology Centre, Bhopal, "Bhopal has the highest incidence of lung cancer among Indian cities. This can be linked to lung injury scars developing into cancerous tissue. The proof is there but the government denies it for then it would have to pay compensation." The government claims to provide free treatment for cancer to those below the poverty line. But to receive this largesse, victims must pass an administrative process. This is so long drawn-out that patients who come to the hospital at the first stage of cancer, usually deteriorate to the third stage by the time they are certified as worthy of treatment.


Seven hospitals, five dispensaries, two polyclinics and nine units of traditional medicine have come up in Bhopal after the tragedy. The number of beds in the city today is twice than what is recommended by the World Bank. Till October 2002, Rs 219.08 crores was spent on expanding the bed capacity of Bhopal's hospitals. However, a 2001 survey by three gas victim groups revealed that the hospitals are understaffed and do not even have basic equipments. For example, pathological facilities such as those for testing sputum are not there in hospitals for gas victims.

Even the much-acclaimed Bhopal Memorial Trust Hospital (BMTH) has not helped much. The hospital was built in 1998 from sale of UCIL shares. The IMC opposed its construction, arguing the city did not require more beds for treatment. They argued that local community clinics were a much better option. The hospital has 14 super-speciality clinics. But only customers who can afford to pay avail of its facilities. The gas affected also require smart cards to get treated in BMTH. They get these cards only after producing proper court documents.

A study by Atanu Sarkar of the Catholic Health Association of India shows that most doctors of government hospital practice privately. And, only patients who consulted them privately can hope for treatment. Only 41 out of the 87 positions for doctors in these hospitals have been filled up. 250 private nursing homes have mushroomed all over the city and a multitude of private practitioners and registered medical practitioners thrive on the woes of the gas-affected.

India has failed to use this tragedy to develop a long-term healthcare strategy. The Disaster Management Institute set up in the city has enough expertise in this field. But the governnment has not consulted it. The International Medical Commission identifies Bhopal as a negative model in disaster management. But the authorities could be least bothered.

Meanwhile the victims make the rounds of the hospitals, insistently, maniacally. Until their money runs out.