When prashant krishnan, vinita garg, aditya jha, gurpreet singh and neeraj kumar set out to map Mayapuri's drainage,they had no inkling that new lessons on sewerage would be in the offing 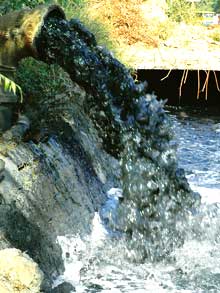 Such shortfalls actually bedevil all cetps in the country's National Capital Region (ncr). In May 2005, the Supreme Court took note: it directed the Environmental Pollution (prevention and control) Authority (epca) -- a statutory body constituted under the Environmental Protection Act, 1986 -- to find why cetps in the ncr were underutilised.

An industrial area's drainage (which includes stormwater drains as well as sewerage lines) holds the key to the performance of the cetp, which serves the area. Different industrial units must be connected to a drainage system, which carries their effluents to the cetp. But there is no comprehensive drainage map of Delhi -- though there are scattered sewerage maps.

First things first, decided the Centre for Science and Environment (cse), a constituent of the ncr's epca. T he organisation decided to map Mayapuri's drainage.

We set foot in the bustling industrial area, one October morning to get the task underway. It's no easy quest. Various agencies -- such as the Public Works Department (pwd), the Delhi Jal Board (djb), the cetp society which now runs Mayapuri's cetp and the Municipal Corporation of Delhi (mcd) -- manage Mayapuri's drainage. But we are in luck. Officials from three of these agencies have gathered under one roof -- the cetp plant --to confabulate on the underperforming plant. Also present are biggies from the Delhi Pollution Control Committee. But Delhi's municipal authorities have decided to give the meet a miss -- even though the mcd manages quite a few of Mayapuri's internal drains.

The meeting starts off with the dignitaries exchanging usual pleasantries, they then banter on about issues that seemed to have little relevance to Mayapuri's drainage.

Or were we on the right track?

We decide to see matters at first-hand. A thick film of grime floating in a storm water drain is the sight that greets us in Mayapuri phase i. We peek in: the slick is actually motor oil. Some clue on the 8 mld missing from Mayapuri's cetp.

But none among the concerned officialdom seemed bothered at the trespass.

See The draomage mapped>>>Officials from the mcd just shrugged off the problem while representatives of the djb, which runs the sewerage system that carries industrial effluents, such as the oil we encountered, contended at the meeting that the system was in perfect order.

Frustrated, we head for a tea shack, nearby. The warm cup has almost soothed our nerves when Gurpreet points to strange projections at a distance; they seemed to jut out of some drains. We poke ahead: ramps for vehicles! Aditya and Vinita exclaim that the ridges have blocked all ingress to the drains. But Prashant quickly calms the agitated minds.

We don't have to go far for our next lesson. Close to the main pwd drains, construction workers seemed to be on the job and the drainage is playing host to a multitude of debris. The construction work has played havoc with the sewerage system connecting the cetp. Not to worry, one official assures us: the construction will be over by December 2005!


We've to jostle past people on the look out for cheap auto motor parts: Mayapuri's scrap market is in full swing. A thick diesel-petrol tar covers the road; some of it even seeps in through Prashant's shoes, leaving a dark stain on his socks. The din of people haggling over scrap prices is punctuated by a trader berating a shop hand. A little curious, we snoop in: the kafuffle has abated. The junk trader sits calmly in his shop right above a storm water drain, while a shop hand washes of some waste by opening a manhole of another storm water drain. Aha, the missing 8 mld mystery is unravelling!

Subsequent visits to Mayapuri help unntangle more knots. The junk trader is actually a petty player in the affair: big industrial units discharge wastes without any compunction to storm water drains. And according to official records, all these are connected to the cetp.


As a parting shot, we are told that two more cetps under construction for the near by industrial areas. One is not even a kilometre away from the underutilised plant; another at Najafgarh is almost abandoned. But will the plant under construction recieve the waste, it's supposed to? How does one ensure that?

Three options emerge: stop all 'illegal' discharge into storm water drains; try trapping the waste in the drains and treating it at the cetp.

W hy another cetp? W hy can't the current cetp not tap effluents from Mayapuri's adjoining industrial area? It's for the 'wise' people who manage the show to decide.