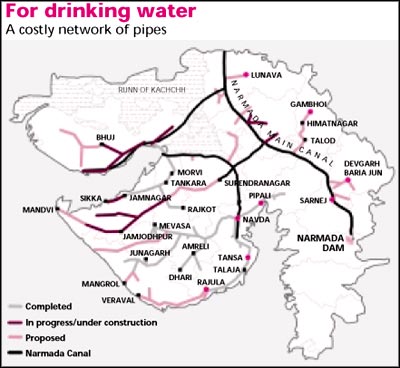 SSP was originally and primarily an irrigation and hydropower project. Today there is a shift in focus: one talks only of drinking water -- a very small part of the original plans for which there was no budget at all. Many feel that the decision to focus on providing drinking water in a time of visible droughts was an obvious attempt to justify the project. While there is no disputing the real need for water in Gujarat, a number of unresolved issues remain, leading to more complications than what meets the eye.

For one, says Sudarshan Iyengar of Gujarat Institute of Development Research (GIDR), "the basis on which calculations for providing drinking water were made have altered over the years, leading to a source of potential conflict". The target now is to cover 8215 villages, 135 towns and 3 municipal corporations in Saurashtra, Kutch and North Gujarat. At the planning stage, a number of factors were taken into account: the existing drinking water supply situation, the actual requirement, the shortage and population growth. Since then the water crises has deepened. Many more villages have become "no-source" ones or have been added to the list of the salinity- or fluoride-affected. It is also alleged that the number of villages that were to receive the water has increased over the years without an increase in the amount of water allocated. "Since urban areas are concentrated pockets of vote banks, they are more aware and vocal. They will be better equipped to negotiate a better deal than rural settlements can ever hope to," is Iyengar's worry.

Mere creation of drinking water supply sources will not ensure water to households. What gets ignored in the euphoria of the pipelines reaching Kutch is the real task of delivering water at the micro-level. How sustainable is the system of delivery? What about recovery of costs? How will conflicts between villages, or even within villages be resolved?

The Gujarat Groundwater Supply and Sewerage Board (GWSSB) has created an elaborate network of pipes to supply drinking water from SSP, over the last six years (see map: For drinking water) at an approximate cost of Rs 7,230 crore. These pipelines are typically centralised, supply-driven systems. They leave the intended beneficiaries out of the process and are very costly.

Over the years, views about such large bureaucracy administered top-down systems -- with low cost-recovery and poor reliability of water supply -- have been changing. "They cannot even manage the initial area let alone spread to new areas," says Apoorva Oza of Aga Khan Rural Support Programme, a local non-governmental organisation (NGO). There is growing acceptance that operation and maintenance (O&M) of water supply installations should be done by local bodies. There is even a government resolution on formation of village pani samitis. "This idea has however not moved from the rhetoric to implementation" says Oza.

A case in point is the Ghogha project in Bhavnagar district -- a pilot project in community management of drinking water. Here the Centre for Environmental Education (CEE) and other NGOs were entrusted with the responsibility of educating villagers into forming pani samitis and collecting costs for O&M. While the NGOs have done their work, the in-village distribution system is nowhere ready. Corruption is rampant: dishonest contractors use poor material and sometimes pipelines run around the village instead of taking a simpler route. According to P M Bohil, sarpanch of Awanaja village, "We have already paid the advance bill sent to us, but because 20 per cent of the work is incomplete, we are still waiting for water." He spoke of neighbouring villagers breaking into pipelines, since they too have no water yet. The pipes have air-valves to release pressure which can be tampered with easily.

The GWSSB is plagued by daily complaints of breakages in pipes. "It takes three to four days to fill the pipes and there are periods of maintenance," explains Nanak Santdasani, executive engineer at the board. "People get impatient and break the pipes. Again if there is no electricity and less pressure, those at the tail-end of the pipeline are sure to tamper with the pipes to get water." He feels that a change in people's mindsets and giving them a real sense of ownership over resources would help in improving conditions.

"Since there is always an election at some level or the other, politicians cannot take harsh decisions," pronounces J Vasawada, member secretary, GWSSB, pointing to the lack of political will to charge for water. Currently it is Rs 14 per capita per year in rural areas. The cost of transporting water over such vast distances is, at best, staggering. He says the electricity cost alone to GWSSB of pumping this water into the system is Rs 10 crore per month. The proposed revised charges are Rs 2 per 1000 litres in rural areas, Rs 5 for town municipalities, Rs 6 for municipal corporations and Rs 15 for industry. While surveys indicate that people are willing to pay for reliable water supply, politicians are hesitant to impose fees. The board feels its hands are tied: if it were to stop water supply for non-payment, political pressure would force them to relent.

The rules are different everywhere: while villagers in Bhavnagar get advance bills even before the infrastructure is complete, in Jasdan taluka and Bhesan they have been getting regular water supplies over the last 6-8 months free of charge. "Water, once received free, will come to be considered a right," is an oft-quoted warning.


North Gujarat is notorious for its heavy dependence on groundwater. Water tables have dropped to such levels, that in places what is extracted is fossilised water. Flourosis affects an increasing number of villages in the area. In spite of this, the recent move to use Narmada water to recharge the groundwater is fraught with the suspicion that since infrastructure in the CA is inadequate, the authorities don't know what to do with all the water they have. M S Patel, Secretary of the Narmada Water Resources and Water Supply Department (NWRWSD) has a different explanation. "It is an investment for the future," he says. "Since the network will not be ready for another 5-10 years, we can use this water to fill waterbodies and recharge aquifers to get a jump start, where groundwater levels can be brought up," he adds.

M K Makwana, of the Drainage Circle of the department, spoke of a Rs 2,500 crore plan for pumping 1 MAF of water up to North Gujarat. The region is not a part of the CA. Currently, a Rs 178 crore scheme is in progress -- a 100 km long pipeline from the main canal will lift water to Dharoi dam. Three pumping stations along the way with a lake at each site will lift the water up the 100-metre gradient. Water will be used to fill tanks, ponds and recharge tubewells along the way.

North Gujarat uses 42 per cent of Gujarat's electricity, mostly at subsidised rates. The idea behind this is that the expenditure on electricity to pump water from the tubewells will be greatly reduced. Since water is to be pumped to a greater height, Makwana believes that it will also flow down, filling ponds and other waterbodies on the way, which are naturally connected through local canals, the drainage system and catchment areas of streams etc. "Over 12,500 tanks (ranging from village ponds to minor irrigation schemes) have been desilted and about 1000 new tanks constructed," he says. Twelve or thirteen such pipelines have been proposed to lift water towards the 9 dams of the area -- not to fill them but to use the existing canal network to distribute the water. This water is incidentally only to be used for recharge, and not irrigation or other purposes.

Dinesh Kumar of IWMI expressed grave reservations about the plan. "Government work is all about civil engineering -- hydraulics is not taken into account," he says. At a technical level there are issues regarding how successfully recharge will actually happen. " It will only create recharge at the shallow aquifers, they need recharge tubewells sunk into the ponds to take water down to lower levels," is his contention.

Makwana reckoned that the cost of lifting water "would still be cheaper than the money the government spends on subsidising electricity for pumping groundwater in the region". There is as yet no tariff system in the government's plans for this water. And, for all the talk of people's participation, there is no clear thinking on how the recharge ponds would be maintained or desilted in the future. Who would manage these local water bodies, who would play a role in conflict resolution? Who would ensure that the water brought in would not beget further extraction, just when awareness about the gravity of the situation was spreading in North Gujarat? These questions only elicit silence from the authorities.

Shah points that the behaviour and practices that took root during the initial years of the project will not only be difficult to change, they will also influence the practices in the coming years. It is for this that the utmost care should be taken in the implementation of the project. The project has aroused enormous expectations, gobbled much public money -- now the politicians have taken over and they are well on their way to dash people's hopes.