Shimla in a shambles

The beautiful resort is fast greying under the onslaught of modernity

Shimla in a shambles 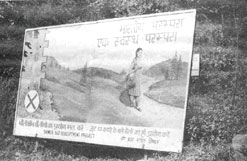 WHY has Shimla, once the summer capital of the British Raj and now the refuge of escapees from the plains' scorching heat, lost its picturesque serenity? Manish Bhardwaj, 15, a high school student, gives a rapid-fire answer: "Unchecked urbanisation -- garbage piles, choked nallahs, polluted streams, broken sewers, chopped trees, foul air, eroded land..." This was in was a dry run for a debate competition organised in early-October 1994 by the Shimla Eco-Development and Conservation Project.

School and college students are the first targets of the awareness campaign of the Rs 10-crore "eco-project", started in 1993 by the Himachal Pradesh Department of Forest Farming and Conservation to save Shimla's ecosystem. For adults, the Himachal Gyan Vigyan Samiti (HGVS), an NGO running a literacy mission, launched on October 11, 1994, campaigns door-to-door from Jakku Hill, located at 2,445 m, the highest point in Shimla. Their target area is 21 municipal wards and the surrounding 10-odd panchayats. The message: plant trees, save water, avoid littering. And shun polythene bags.

These measures are now vital for a city whose population spiraled from 46,000 to 1.37 lakh between 1951 and 1991. The scope of the eco-project ranges from prevention of land erosion and garbage management to the beautification and promotion of ecotourism. Project personnel have channelised nallahs, erected check dams and built "toe-walls" on fragile hillsides; they have fenced off urban forests, made gardens on traffic islands and created an eco-park at Potters Hill.

Says Rajesh Sharma, the young forest officer in charge of the project, "You have to make something visible to make people participate." In the 1994 monsoon, 26,000 trees were planted, overshooting the target of 19,000. "Schools, colleges and citizens' bodies came rushing. We could not find enough space," says divisional forest officer (DFO), wildlife, G S Goraya, project supervisor.

Still, a certain cynicism about the project prevails amidst government officials and common people alike. Says K C Verma, municipal commissioner, Shimla, "So, they told you that they were going to clean up the city?" He was referring to the eco-project's garbage management. It is 50-tonne-a-day problem with spillovers, of which the Shimla Municipal Corporation manages to collect only half. Dumped on the hillsides, it contaminates springs. Says Goraya, "Most of it goes to the Darni ki Bagicha area."

Mountain springs feeding villages upto Solan downhill flow through this area. "Often the villagers end up drinking filthy water," says hgvs activist Jianand Sharma. Although recently a Bombay-based commercial firm came up with an incinerator project, "too little" garbage, says Verma, did it in. For the other half of the garbage, people collect it in polythene bags, wait for nightfall, and heave them in the general direction of the dumping bin. Predictably, the missiles often miss the target. The damages recorded:

Recently, while inaugurating the park, the state chief minister promised to ban the polypacks, omnipresent eyesores that have replaced Shimla's wild flowers. He told Down To Earth, "We are examining 2 options. One is to take action under the Environment Protection Act (EPA). The other is to make a separate legislation."

The HGVS has formed 7 eco-clubs in Jakku. The state government has roped in civic bodies and various departments, kicking off a new Rs 160-core cleanup project. Says V P Mohan, principal chief conservator of forests, Himachal Pradesh, "Now all departments participate. The chief minister has stated that this project will go on indefinitely and there is no budget limitation."

But loose purse strings do not necessarily ensure money-flow downhill to the panchayats around Shimla, which comprise 4,125 ha of the total 6,000 ha of the eco-project area. The HGVS and the publicity division of the forestry department together received a mere Rs 6 lakhs out of 1994's Rs 1.6 crore project budget. In contrast, Rs 27.5 lakhs went to landscaping and beautification.

Cheli in the Malyana panchayat is at the receiving end of the city's dirty dumping. Kusumpati, the municipal ward uphill of Cheli, buzzes with construction activity as Shimla grows mercilessly. The construction debris on the hillsides slides downhill, especially during the rains. In Cheli, it blocks the springs, muddies drinking water, and destroys fields and surface vegetation.

Worse still, Junu Colony's sewers winding through Kusumpati are leaking. Dirty water gets mixed with the ghat, the source of Cheli's bodi (spring). "Sometimes the water gets too dirty even for animal consumption," says Savitri Devi, president of the local Mahila Mandal.

hgvs activists say that Cheli is not an isolated case. Forestry personnel say that often nallahs were treated upto city limits, opening them like inverted funnels to villages, although Mohan denies that this ever happened. Says K S Tanwar, hgvs state coordinator, a DFO on deputation, "Often officials fail to feel the pulse in the grassroots."

---With additional inputs from Meera Iyer/Shimla.