The more fish are introduced in Vidarbha, the more it loses diversity 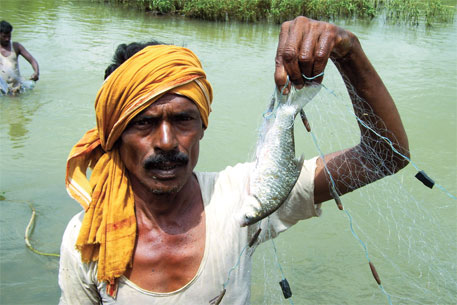 Shivaji Dawle draws his net out of the swiftly flowing Bembla river. In it are three fish, each about 10 cm long. “Look now,” he cries as he extracts his catch, “two out of three are sarkari fish.”

“All the nice fish of our childhood are disappearing,” says elderly Mahadeorao Sonbawane, who has been watching from the bank in Belkhed village of Maharashtra’s Washim district. “All we get is sarkari fish, which no one here likes to eat, and which does not fetch us a good price in the market.”

Sarkari fish are the ones introduced by the state fisheries department. The aim is to boost the productivity of reservoirs but fishers’ experience has been different. Across the Vidarbha region they are reporting a rapid loss of fish diversity. What’s worse, hardly any information is available on how much of the diversity has been lost.

Fishermen say the damage started with the construction of a plethora of irrigation projects across the region which block the migration routes of the fish. The other suspect is the fisheries department, which introduces commercial species of Gangetic carps like rohu, mirgal and katla into the reservoirs. These compete with local species.

Experts point to yet another danger, and a graver one at that: invasive species like tilapia and African magur, which, though banned by the government, find their way into rivers either illegally or through contamination in fish seed.

Strange fish in the water

About three years ago, the Bhoi fishers along the Bembla in Washim noticed a strange fish in their catch. Because of its sharp dorsal fin and aggressive nature the people named it kombda (cock). “This fish is spiny, does not taste good, and fetches only Rs 60 a kg,” says Ganesh Amzare of Ladegaon village.

A few years earlier, fishers were puzzled to find large, black magur catfish in their catch. “Our local magur is muddy brown and much smaller,” says Amzare. Initially, they thought they could make good profit, but soon it turned out that the African catfish variety, Clarias gariepinus—which the fishers wrongly call “Thai”—was not that appreciated. It fetches only Rs 80-100 a kg, while the local variety is sold for Rs 300 per kg. 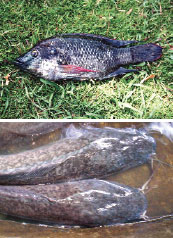 Around this time the numbers of local magur (Clarias batrachus) and singi (stinging catfish, Heteropneustes fossilis), a related variety, started dropping. “Our rivers had some 30 small and big fish varieties before these fish came along,” says Sonbawane. “Our two most favourite varieties, maral (Channa marulius) and waira (Mastacembelus armatus) have virtually disappeared.” Small prawns were also abundantly available. The fishers would dry them for sale to tide themselves over the summer months when the catch would be low.

Fishers are not aware that they are dealing with two of the most invasive fish species in the world. Tilapia (Oreochromis mossambica), as kombda is known worldwide, is recognised as an invasive species, says Swapnil Ghatge, assistant professor of fisheries biology at College of Fisheries Science in Nagpur. “It reproduces rapidly and is a mouthbrooder, which ensures better offspring survival. It is also a versatile feeder that competes with all local varieties.”

African magur has no natural predator in this environment, hence it has a higher survival rate than its local counterparts, he adds. It is banned in India. Cultivation of only all-male, hormonally sex-reversed tilapia is permitted and that too only in cages and ponds in areas not prone to flooding. However, since it was first introduced in 1952, tilapia has spread in the country’s rivers, says Manohar Bhursundi, retired regional director of fisheries, Pune.

Fish biologist Neelesh Heda from Washim non-profit Samvardhan, who has studied the spread of tilapia in Vidarbha for over a decade, first found this species in the Kathani river in Gadchiroli in 2003. “I carried out checks for the next five years and found them in the river every year.” Later, he found tilapia in Rishi Talao, a huge tank in Karanja in Washim, and tanks and rivers in Bhandara district. “Its spread always coincides with depletion in the numbers of local fish because its feeding niche overlaps with that of a variety of fish,” Heda says. “Tilapia is also responsible for the depletion of prawns, which it eats.”

Sarkari fish is invasive, too

The fish introduced by the fisheries department are assumed to be safe but their impact on the new environment has not been studied scientifically. The department regards Indian major carps (IMC), and Chinese silver and grass carps as non-invasive as these are herbivores.

However, initial observations indicate adverse impacts. “Artificial introduction of non-local carps has disturbed the fish species balance,” says Ghatge. “While local species are declining, the introduced species are also not stabilising—seed has to be added every year and fish populations are declining.” Heda’s studies show that voracious grass carp introduced in the lakes of Bhandara destroyed the lake vegetation. “The total fish production registered a temporary high but local species suffered,” says Heda.

How come the state bureaucracy is not bothered? Turns out no department is responsible for documenting or preserving freshwater biodiversity. Anil Arjunkar, assistant commissioner of fisheries, Nagpur, says identifying or preserving fish varieties, or curbing invasive species, has never been on the department’s agenda, its only job being production enhancement. “Once a tank or reservoir is leased out the department does not have much of a role to play apart from providing IMC seed,” he says.

According to Bhursundi, the department’s role in controlling invasive species has been curtailed by hastily implemented regulations. In 1991-92, the government stopped seed procurement and asked the department to produce it locally. While the idea was good in principle, says Bhursundi, it was impossible for the department to meet the state’s requirement in the first year. Under pressure from fisheries contractors government allowed private seed procurement, which has become the norm. “Now the department does not have the power to monitor seed procured by private contractors,” he rues. “As a result, tilapia contamination in IMC seed is rampant, and unscrupulous contractors also introduce African magur for a quick buck.”

In the absence of substantial research, assessment of the extent of damage to fish biodiversity is not available. The first ever field guide on fish in central India was written by Heda as recently as 2009. College of Fisheries Science, the only institute in Vidarbha carrying out research in fish diversity, was started only six years ago. “We still do not have a comprehensive data-base on fish distribution in the region,” says Ghatge.

“Initial research indicates that popular tamboo (giant freshwater eel) and the tiny molwar (Amblypharyngodon mola), loved for its high nutritive value, have declined greatly, and maybe are on the verge of extinction. Indian magur is also declining,” says Ghatge.

There is a crying need for quantitative studies, says Anuradha Bhat, fresh water ecology expert from the Indian Institute of Science Education and Research, Kolkata, who has studied fish diversity in Western Ghats. “At present, only anecdotal information is available on the presence of invasive species.”

Research alone will not help. A majority of reservoirs in Maharashtra are with private contractors, leaving fishing communities very little say in fisheries management. Involving fishing communities in management and legislative intervention are also crucial. “The department is still functioning on the antiquated Indian Fisheries Policy of 1897,” says Ghatge. “It is time provisions for protection of fish diversity and control of invasive species were added to it.”