What happens when ice melts in the Roopkund tarn? 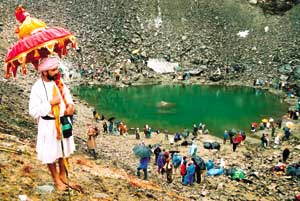 When ice melts in the glacial tarn of Roopkund, located 5,000 metres above sea level in Chamoli district, Uttaranchal, hundreds of corpses can be seen floating. Thus gets exposed a mystery that dates back to more than 60 years and has begun to be understood only recently.

In 1942, a forest guard chanced upon hundreds of skeletons at this tarn. The remains have intrigued anthropologists, scientists, historians and the local people ever since. Who were these people? What were they doing in the inhospitable regions of the Garhwal Himalaya? Many speculated, initially, that the remains were those of Japanese soldiers who had sneaked into the area, and had then perished to the ravages of the inhospitable terrain.

Those were World War ii times and even the slightest mention of a Japanese invasion was bound to throw the area's British administrators into the tizzy. The matter was investigated and the speculation was put to rest: the corpses were said to date back to at least a century. But nobody knew when exactly. Some British explorers to Roopkund, and many scholars attribute the bones to General Zorawar Singh of Kashmir, and his men, who are said to have lost their way and perished in the high Himalayas, on their return journey after the Battle of Tibet in 1841.

But radio-carbon tests on the corpses in the 1960s belied this theory. The tests vaguely indicated that the skeletons could date back to anytime between the 12th and 15th centuries ad. This led many historians to link the corpses to an unsuccessful attack by Mohammad Tughlak on the Garhwal Himalaya. Still others believed that the remains were of those of victims of an unknown epidemic. Some anthropologists also put forward a theory of ritual suicide.

Local folklore has it that in medieval times, king Jasdhawal of Kanauj wanted to celebrate the birth of an heir by undertaking a pilgrimage to the Nanda-Devi mountains in the Garhwal Himalaya. However, he disregarded the rules of pilgrimage by boisterous singing and dancing. The entourage earned the wrath of the local deity, Latu. They were caught in a terrible hailstorm and were thrown into the Roopkund lake.

Now the first forensic investigation of the frozen corpses has concurred with the hailstorm theory. Scientists commissioned by the National Geographic television channel to examine the corpses believe that they died from sharp blows to their skulls. "We retrieved a number of skulls which showed short, deep cracks," said Subhash Walimbe, a physical anthropologist at the Deccan college, Pune. Walimbe was a member of the team that visited the site.

"The cracks were caused not by a landslide or an avalanche but by blunt, round objects about the size of cricket balls," he surmised. According to Walimbe, "The only plausible explanation for so many people sustaining such similar injuries at the same time is something that fell from the sky. The injuries were all to the top of the skull and not to other bones in the body, so they must have come from above. Our view is that death was caused by extremely large hailstones". Another member of the team, Wolfgang Sax, an anthropologist at Heidelberg University in Germany, cited a traditional song among Himalayan women that describes a goddess so enraged at outsiders who defiled her mountain sanctuary that she rained death upon them by flinging hailstones "hard as iron".

"We were amazed by what we found," said Pramod Joglekar, a bio-archaeologist at Deccan College, Pune. "In addition to skeletons, we discovered bodies with the flesh intact, perfectly preserved in the icy ground. We could see their hair and nails as well as pieces of clothing," he said. The scientists found glass bangles, indicating the presence of women. The team also found a ring, spear, leather shoes and bamboo staves. This has led them to hypothesise that the corpses were those of pilgrims. The scientists estimate that as many as 600 bodies may still be buried in snow and ice by the lake.


The samples were sent to the Radiocarbon Accelerator Unit of Oxford University, uk where the date of death was established at about 850 ad. The team has yet to resolve the identity of the victims, though.

Meanwhile, scientists at the Centre for Cellular and Molecular Biology, Hyderabad have also undertaken tests on skeletal remains. Lalji Singh, the director of the centre, said that his institute had conducted studies on the dna of 31 samples of bone and muscle taken out from the remains. "Three samples have unique mutations in the mitochondrial dna which are not found anywhere in the world but only in a particular group of people from Maharashtra," he said. Singh, however, refused to mention the ethnic group. He said analysis of two other samples matched with some people living in Garhwal even as further studies on all the 31 samples were still on to find out more accurate facts.

D K Bhattacharya of the National Geographic team agrees: "Only a few have the characteristics of the Mongoloid hill people of the Himalaya," noted this scholar from the University of Delhi. It's quite possible that the pilgrims employed these local people as porters. After all, Roopkund is almost 35 km away from the nearest human settlement and it's virtually impossible for outsiders to venture into the area without taking the help of local people.


It is quite unfortunate that the local administration has made no organised attempt to protect this site. Skeletal remains and other articles of those who perished ages back are reported to have been diminishing fast from here. Lack of administrative will and a general indifference has denied this destination its due place on the international tourist map. In the ceaseless efforts to win over nature sometime we emerge as victorious though losing the battle is also an integral part of the game. The Roopkund reamins an indicator of the latter