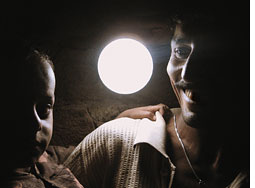 It is a simple device but it has shrunk the nights in Rajasthan's countryside. Over the past decade, thousands of families in the state's remote villages, unconnected with the grid, have installed solar lighting systems at their homes, which harness solar energy to generate electricity.

According to the Rajasthan Renewable Energy Corporation, the nodal agency of the union Ministry of New and Renewable Energy (mnre), 73,590 solar home lighting systems have been installed in Rajasthan since 1999. This is more than one-fifth of the total such systems installed across the country. Dabkan in Alwar district is one such village where all the 50-odd families use solar lighting systems. "We don't need the grid. It is unreliable and dangerous, and one has to keep paying the bill," says Choti Devi, a resident. While solar power came to Dabkan in 2006, some villages in Sawai Madhopur district have been using it for six-seven years.

The device, manufactured by Rajasthan Electronics and Instruments Ltd, has a 37-watt solar panel, a 12-volt battery with an estimated life of five years and a two-point connection, which includes two nine-watt cfl bulbs. It costs Rs 10,625. Villagers say they get up to seven hours of lighting, and can also run a small fan or television with the system. "The scheme is a success. We have been able to spread it through word of mouth," says M S Mathur, field officer at the Rajasthan Renewable Energy Corporation.

So what is making the solar home lighting system successful in Rajasthan? One, it helps that the state receives good sunlight throughout the year. Two, these are introduced through gram panchayats--after people see its functions and benefits, they are willing to pay. And three, the state gives the biggest subsidy of all the states, says Mathur. The subsidy is given directly to the people, with the funds coming from mnre through the state nodal agencies. The Rajasthan Renewable Energy Corporation provides extra funds for subsidies from other government agencies such as the Tribal Area Development Agency.

"We hope the system becomes popular to the extent that people are willing to pay for it themselves. As you add more people to the pool, the amount of subsidy decreases," says B Bhargava, director of the Solar Photovoltaic Development Project at Solar Energy Centre, a research branch of mnre. About seven years ago, villagers were paying only Rs 3,600 for the system. There has been a slight dip in the sales since subsidy was decreased in 2003. While 12,386 systems were installed in Rajasthan in 2002-03, the next year 9,750 systems were installed, says Mathur. "Financing is still the biggest challenge," he says.

Independent entrepreneurs have entered the solar home lighting system market. Grameen Surya Bijlee Foundation, a Mumbai-based non-profit organization, is thinking of the next generation led -based systems that last longer and cost less--Rs 4,000. The bulbs in such systems do not contain mercury, hence are safer to dispose of than cfls.

Besides a two-point bulb connection, the system has a connection for charging mobile phones and an additional connection for a torch. In 2006, Surya Bijlee first installed the system for free in Dabkan houses to get people interested. Since then it has installed 2,000 systems in Rajasthan--more than half of them in Banswara district.

People have seen a change in their quality of life, thanks to the solar lighting system. "My son stays up later than all of us, studying through the night," says Guddi Devi, a resident of Dabkan. People no longer have to put up with fumes and soot produced by kerosene lamps. "Solar is the best option for rural electrification. But for true village electrification, we need more than just these," says Sudhir Mohan, in-charge, rural electrification programme, mnre.

With the demand present and the need apparent, the drive to spread such systems must continue, with eyes fixed on future technologies.