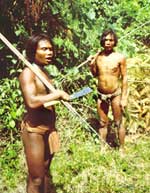 Located in the Indian Ocean, the Great Nicobar Island is home to the little-known tribe of Shompens. Displaying a stark resemblance to African populations with some Mongoloid traits, they still cling to the life of hunter-gatherers. Except occasional visits by researchers and government officials, the enigmatic Shompens, who number just about 200, remain largely immune to the influence of the outside world.

In an attempt to unravel their origins, a team of Indian scientists recently studied their genetic material. It found that the Shompen "exhibit varying levels of genetic relatedness with the Nicobarese, and Austro-Asiatic speakers of mainland India and Southeast Asia", says Vijendra Kumar Kashyap, who led the researchers from the National dna Analysis Centre in Kolkata, Noida's National Institute of Biologicals and Port Blair's Andaman Adim Janjati Vikas Samiti.

For the study, the scientists collected blood samples from 33 unrelated Shompens and then extracted and isolated their dna. They specifically looked for mutations in mt dna -- dna of the mitochondrion, an organelle that supplies energy to the cell and is inherited only from the mother. They also examined dna segments on the y chromosome that can be passed only from a father to a son. The findings were compared with data on related populations of India, East Asia, Southeast Asia and Oceania.

While analysis of mt dna reveals that the maternal lineage of Shompens is closest to that of Indonesians, variations of dna segments on the y chromosome reveal affinities to Austro-Asiatic people, and to Nicobarese and Vietnamese, rather than to mainland Indian populations, says Kashyap. The study appeared in the Journal of Human Genetics (Vol 51, No 3, March 2006).

The study will help understand how modern humans, believed to have evolved in Africa, spread to other regions. "The Shompens are an interesting people because they have morphological features akin to many African tribals," says Partha Prathim Majumder of Kolkata's Indian Statistical Institute. This makes the study relevant in the context of a hypothesised southern exit route of modern humans from out of Africa. "If anatomically modern humans had indeed used the southern exit route as they moved to populate Australia, then the Andaman Islands and Southeast Asia could have lain on their trail," wrote Majumder in a recent issue of the Journal of Bioscience (Vol 30, No 3, June 2005).

A study led by Vincent Macaulay of University of Glasgow, Scotland, supports the hypothesis. "Analysis of mt dna variation in isolated 'relict' populations in southeast Asia supports the view that there was only a single dispersal from Africa, most likely via a southern coastal route, through India and onward into southeast Asia and Australasia," say Macaulay and his colleagues in a paper published in Science (Vol 308, No 5724, May 13, 2005). This probably happened during the last ice age 30,000-40,000 years ago when sea levels dropped hundreds of metres and the shallow seas between Asia and the Indonesian islands of Sumatra, Borneo, Java, and Bali became dry. This probably paved the way for rapid human migration colonising Indonesian islands and even Australia and Papua New Guinea. The Indian study supports this explanation, since it has found that Shompens are genetically close to Indonesians.

The study also shows that the Shompen and the Nicobarese probably derive from the same founding population but split around 14,000 years ago, says Kashyap. Support for a possible split comes from the analysis of the mt dna isolated from the samples. The mt dna analysed contained only two distinct genetic groups -- b5a and r 12 -- which showed very little genetic variation. The low diversity in the Shompen and "the high diversity of these two groups in the Nicobarese, indicates a founder effect in the Shompen," says Kashyap. Founder effect is the loss of genetic variation when a new colony is formed by a very small number of individuals from a larger population.

The r 12 group is also present in the Great Andamanese (who are Negritos) but with a low frequency, ruling out their genetic contribution to the Shompen analysed. Due to the founder effect again, Shompens may have lost traces of genetic signatures directly linking them to their African ancestors.