Six months past the fra implementation deadline, Maharashtra is struggling to understand the Act and its provisions. The central issue in the state revolves around the local body employed to initiate the implementation procedure. The state government is going by gram panchayats and group gram panchayats, and villagers are demanding pada (hamlet)-based committees, saying it will facilitate people's participation, filing of claims and physical verification.

"Akkalkuva tehsil in Nandurbar district, a hilly terrain, has over 197 villages under 42 gram panchayats. One gram panchayat covers various villages, which could be as far as 30 km.How can one gram panchayat represent everyone correctly? What will happen when the claims made by the people would require to be physically verified by one village committee?" asks Pratibha Shinde of Nandurbar-based Punarvasan Sangharsh Samiti, which works on forest rights issues of tribals in Maharashtra and Gujarat.

Brian Lobo of Kashtakari Sangathan, a Dahanu-based civil society group, says they have tried explaining to the state government the need to go down to the pada level, but to no avail. "Gram sabhas in Dahanu have been conducted at group gram panchayat levels and village committees formed at the revenue village level. In some cases the sarpanch has become the chairperson of the committee and does not want to let go of power. In February, some hamlets in Dahanu declared themselves a gram sabha unit, but the confusion remains if the state will recognize these gram sabhas," he says. 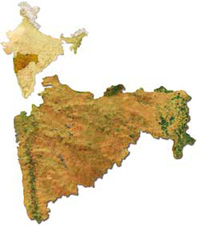 Some villages in the taluka, on their own, decided to decentralize the process. For instance, Shisane village held its gram sabha at the pada level and formed a forest committee there. Vanai, a resettlement village within Chandranagar village of Dahanu taluka, is another such example.

Villages that are aware of their Schedule status--Nandurbar, Jalgaon and Dhule--have used provisions of the Panchayats (Extension To The Scheduled Areas) Act, 1996 to set up their own pada committees and directed the government to recognize them. In Nandurbar, 152 pada committees have been formed, in Jalgaon, over 150 and in Dhule, 45.

The Act says that gram sabha should be 'convened' by gram panchayat, which is being interpreted as each gram panchayat should hold just one gram sabha. This issue needs to be resolved urgently. The 90-day period for filing of the claims will end soon, leading to chaos. "Even in case of the 90-day time-frame, the Act is being wrongly interpreted. It says 90 days from the day village committee calls for the claims. But this is being misinterpreted as 90 days from the day a committee is formed," Lobo says, adding that the decision on whether to go for pada committees of revenue village committees should be left to the gram sabhas.

Matters get further complicated when one looks at villages that have both tribal and non-tribal populations. "In villages with a mixed population, Shahpur taluka in Thane for example, non-tribals do not want land to be given to tribals because that would mean less labourers in their farms and more conflict over grazing and other issues. Implementation of the 2006 Act will heighten this tension. Hence it is important to have pada -based gram sabhas," argues Lobo.

Maharashtra has some local land systems such as Dali plots and Aksali land, which have existed since 1876. Dali plot is issued on a one-year lease to a community, and the practice is continuing for the past 100 years. Aksali land is leased to an individual. The state also has another unique feature of private forestland. In 1975, the state government came up with Maharashtra Private Forests (Acquisition) Act, under which private land was 'acquired' as forestland. But the land remained in possession of the previous landowners, most of whom still till it. "It remains to be seen how the state government will settle such claims," says Lobo.

Another pressing issue in the state is the Melghat Tiger Sanctuary. "In a meeting with forest officials and Project Tiger officials at Chikaldara, it was clear that the forest departments did not want to implement the act. They do not want to let go of forestland," says Bandya of Khoj, an Amravati-based ngo. Villagers are thinking of ways to ensure that the 2006 Act becomes applicable in such habitats. In Melghat region, village committees have been formed with gram sevak as its secretary, whereas gram sabhas are yet to be held.

The other issues are the same as any other state in the country gram sabhas being held hastily, not enough forms, no mention of community forest claims, very little staff training, constitution of forest rights committees and caste certificates. The tribal development department initially thought of printing only 50,000 forms for the entire state, which is laughable, say experts, because in Thane district alone, claims will exceed the 0.1 million mark.

There are no figures on the extent of land that will be covered under the Act in Maharashtra. However, Pune-based Tribal Research and Training Institute's recent status report says, "... gram sabhas are being organized across the state. The committees have also been formed and the state level monitoring committee headed by the chief secretary is also in place." The institute, under the tribal department of Maharashtra government, is the agency involved in the implementation process.

Officials themselves want separate machinery for the implementation of the Act. Most sub-divisional officers claim they are overburdened with the paperwork. "Our aim is that all the claims get settled at the village committee level so that no one has to approach the sub-divisional or state level committee," says Shinde. Lobo adds, "This Act should not be viewed only as an election promise to be fulfilled but must be implemented systematically."

Activists and villagers in Maharashtra, like in other states, are closely following the implementation process. So do the millions of expectant tribals and traditional forest dwellers for whom the law was enacted. They hope the teething issues don't stretch and they live on their land, which they say is "rightfully theirs".