Spring in a box

Spring in a box 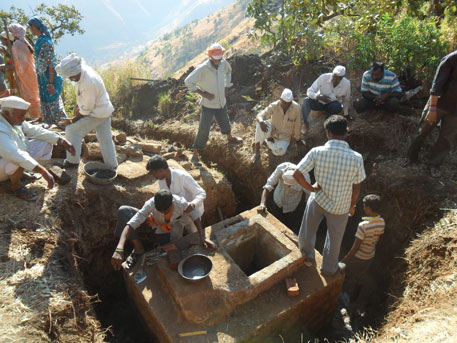 Villages around Panchgani, a quaint hill station in Satara district of Maharashtra, have been facing a severe water crisis for a decade. One of these villages, Akhegani, has, however, found a way to overcome the crisis-it taps underground spring water.

Till recently, it had to depend on tankers for drinking water. These supplied barely 1,000 litres of water every day for the village population of about 600 people, mostly farmers, according to records available with the municipal body, Panchgani Nagar Palika. This translates to 1.6 litres per person. In comparison, the hill station receives 133 litres of water per person from the nearby Dhom dam. A few farmers in Akhegani own wells and borewells, the water from which is used mainly for irrigation. “We would be without water for most parts of the year,” remembers Archana Gawde, one of the many village residents who has struggled to get drinking water. 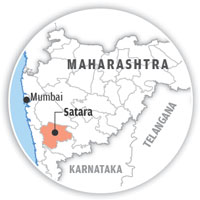 Things changed in 2012 when the people in Akhegani joined hands with Grampari, a non-profit in Panchgani, to build spring boxes that tap underground spring water. The community effort has turned Akhegani’s fate from being a water-starved village to a self-sufficient one. “Now there is ample water in each family for at least eight to nine months,” Gawde says.

The idea of a spring box was conceptualised by Jared Buono, an American hydrologist working with Grampari. The pilot project was undertaken in Pachputewadi village in 2010. From 2012-2014, the non-profit installed spring boxes in five villages, including Akhegani, Kinude, Kondavle, Goravli and Patilwadi. Under the guidance of Buono,over 200 people, mostly masons, came together in Akhegani and used their skills to materialise the concept.

They first excavated the land at the site of the spring until they reached the source. Once this was located, they built a brick box around the eye of the spring and coated it with cement to prevent contamination. Holes were made in the back wall to allow water to enter the box. An outlet pipe leading to the village was laid at the bottom of the box, with an overflow pipe at the top to drain out excess water during the rains (see ‘An out-of-the-box solution’). 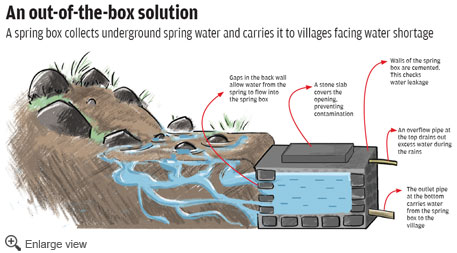 The spring box collects fresh spring water, which is carried to the village through the outlet pipe. Throughout the day, people come to fetch water. But there is no storage mechanism at present. As a result, water from the pipe is left running when no one uses it, leading to wastage. The sarpanch of Akhegani panchayat, Sahebrao Shankar Gawde, says the village plans to build a storage tank next year with a capacity of 100,000 litres. But it is unlikely that the panchayat will be able to collect the required money. Due to inadequate funds, the outlet pipe has not been changed for three years.

Grampari does not take responsibility for maintenance. “We only provide the construction material and transportation costs,” says Jayashree Rao, founder-director of the non-profit. The onus of preserving the spring boxes is on the panchayat and local people. The cost of a spring box varies with the size, but most of the ones constructed cost between Rs 20,000 and Rs 60,000.

Not many takers yet

Spring boxes are a sustainable option to rescue water-starved villages in the vicinity of Panchgani. But it requires more intervention in terms of policy change and government funding. The law in Maharashtra does not permit construction of borewells within 500 metres of a water source, although the state provides funds and subsidies for wells and borewells. “No one adheres to the law. A lot of borewells are being dug that quickly use up groundwater. As the government provides subsidies, people opt for borewells instead of water conservation methods like spring boxes, which are not funded. This is causing massive depletion of our groundwater reserves,” explains Rao. Neither Grampari nor Panchgani Nagar Palika had concrete figures to show the extent of water depletion.

According to VasantJadhav, deputy engineer for the Rural Water Supply Scheme in Mahabaleshwar taluka, including Panchgani and its surrounding villages, the state government does have schemes for utilising spring water to reduce water scarcity. Under the National Rural Drinking Water Programme, the Centre provides funds directly to the gram panchayats for projects like percolation tanks, pipelines, storage tanks, water pumps and spring tanks, he says.

Rao agrees that there are a lot of infrastructural water projects under way in the area, but none of them has a holistic approach for water conservation and purification. “The government’s spring tanks are just tanks built next to the spring source. They are open and get easily contaminated. Grampari’s work includes building closed boxes for storage and testing the water regularly for impurities,” she says.

The non-profit is currently compiling data from its surveys and projects in Panchgani which will be given to local and state government bodies in the hope that they recognise the viability of spring water sources.