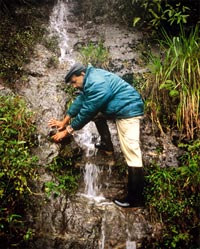 In 1957, Sri Lankan naturalist Parakrama Kirtisinghe published a monograph titled The Amphibia of Sri Lanka. In it, he recorded the presence of 35 species on the island nation. Over the next three and a half decades, with new species being discovered on a fairly regular basis, this number had swollen to a healthy 53.

Then, in 1993, a field survey began that re-wrote Sri Lanka's natural history. Rohan Pethiyagoda and Kelum Manamendra-Arachchi of the Wildlife Heritage Trust, Sri Lanka, decided to put old research methods behind them (validating museum specimens, or species first written about in the 19th century) and plunge straight into the rainforest. More importantly, they decided to look only above eye-level.

Aided by a wwf Small Grants Trust, they began a systematic survey. Actively peering into trees, the surveyors couldn't believe what they saw and heard - a living collection of frogs that nobody had ever recorded about. Within five years, the number of amphibian species endemic to Sri Lanka leap-frogged to 250.

This happened at a time when the number of such species seemed to be on a decline the world over. Habitat destruction, human activity -- essentially the demands of a way of life that hadn't factored frogs in its growth path -- seemed to ensure a biotic tragedy. There would come a time in the not-so-distant-future, naturalists feared, when frogs would be seen only in books of natural history. Just as dodos are.

Naturally, such a discovery thrilled Sri Lanka's naturalists. It became clear to those who participated in the survey, by inclination or eagerly accepted invitation -- such as Indraneil Das of the University of Malaya, Sarawak, Malaysia; Robert F Inger, a herpetologist affiliated to Chicago's Field Museum of Natural History; Alain Dubois, Director and Curator of the Laboratiore des Reptiles et Amphibiens of France's Museum National d'Histoire Naturelle, Paris -- that Sri Lanka is a biodiversity hotspot. But they are also anxious.

It is clear to these experts that the area these frogs have thrived in needs to be conserved. Now, that is a political issue, not a natural history one.

the survey obtained samples from 354 locations in Sri Lanka. It avoided the northern and eastern parts, inaccessible because of the on-going separatist war. It concentrated on what is called the 'wet zone', the area of south-western Sri Lanka - its central hills and a sub-area called the Knuckles Mountain.

The wet zone comprises 750 square kilometres (sq km) of prime, primeval, rainforest. That's a large area, one would think. But considering that Sri Lanka's rainforests covered 16,000 sq km just 150 years ago, it's only a small remnant of what used to be. When colonial deforestation commenced in the 19th century, almost 404,687 hectares of rainforest were cleared to make way for tea and rubber plantations. All but three per cent of Sri Lanka's montane rainforests were destroyed.

This process of destruction continues to the present day. Naturalists are worried on two counts: How many species have been destroyed in the process, and how many more will be?

Some of the newly-discovered frog species inhabit as small an area as 500 metres. Indeed, one of the unique features of the discoveries in Sri Lanka is that the newly-found species inhabit a very localised range. Biologists call this 'point endemism'. And point endemism has turned out to be their nemesis, and a cause for worry among naturalists.

why is it that these species do not increase their ranges of occupation? (And thereby, their chances of survival?) Researchers still do not know. What they do know is that many of these frogs do not undergo a tadpole stage. The eggs are laid on the forest floor, among leaf litter, and hatched directly into small frogs, bypassing the tadpole stage. They do not therefore need to enter water bodies as part of their breeding cycle. Water flows. These frogs needn't, because they do not rely on flow. They rely on space.