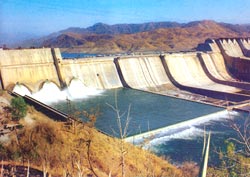 Thirty years of planning, 15 years of construction, ten years of promises and Rs 15,000 crore later, the Sardar Sarovar Project (SSP) is finally functioning -- officially. Glossy pamphlets of the Sardar Sarovar Narmada Nigam Ltd (SSNNL) proclaim that Narmada ka paani will now provide irrigation, rejuvenate drinking water supply and recharge groundwater in the state -- especially in North Gujarat where the groundwater situation is precarious. Gujarat has been reeling under severe drought for the last three years. Naturally, there is much elation over the Narmada waters flowing into the state. The media in the state buzzes with touching stories of how the miraculous flow of the river's waters has brought joy to far reaches. But is the euphoria premature? Does Gujarat have an infrastructure in place to receive the Narmada bounty? Was the decision to press the SSP into action in drought-hit Gujarat a product of pure political calculation?

Water would flow naturally into the Narmada Main Canal (NMC) once the Sardar Sarovar dam reaches a height of 110 metres (m); this height has not yet been reached. So, to access water from the lower reaches of the dam, the authorities have been devising two Irrigation Bypass Tunnels (IBT) since October 2001, when the Supreme Court gave them permission to do so. One of these is ready and allowed for water from the dam to be used this Rabi season. This time, the state could avail of only 3 million acre feet (MAF) of its share of 9 MAF (8 MAF for irrigation, 0.86 MAF for drinking water, 0.20 MAF for industrial use) says J B Patel, Chief Engineer of SSNNL -- partly because of the limiting dimensions of the IBT.


While Gujarat's politicians ride high on bringing water all the way to Kutch, behind the scenes chaos reigns. Serious questions can be raised about the system's capacity to receive the Narmada water. The stated aim of the SSP is to irrigate 17.93 lakh hectares (ha) of land (see map on next page: Will they ever have water?). Of that, one lakh ha of land in Baroda, Baruch and Narmada districts was to be provided with irrigation water last Rabi season. In actual fact, according to the team from the International Water Management Institute (IWMI), Anand -- which has been closely following the developments here -- the infrastructure is ready in only about 20,000-30,000 ha.

A number of assumptions were made, during the planning phase, about the way SSP would function. One of the boasts was that the construction of the distribution network was to happen independently of dam building in order "to minimise the time-lag between creation of water storage and readiness of the conveyance system -- without which water cannot be put to use". As it turns out, so far only about five per cent of the canal network is ready to receive water, and that too, only partially. A persistent problem faced by SSNNL, according to Jayesh Talati of IWMI, is difficulty in acquiring land from farmers. At one point there were more than 60,000 cases pending in the court on this issue. He also talks of the typical contractor-engineer nexus and rampant bribery and compromise on quality of material. All this has slowed down the process and has meant higher expenditure for the cash-starved SSNNL.

Another innovative feature on the planners' agenda was that the task of building sub-minor canals (towards the end of the distribution system) and field channels (which serve 5-8 ha sub-chaks of land) was to be assigned to farmers' associations. The SSNNL was to provide them technical guidance. Officially, over 1,100 Water Users Associations (WUAs) have been formed. It was envisaged that each will own and manage the distribution of water on a volumetric basis within its "Village Service Area". The WUAs were also to collect water fees of Rs 157 for per ha of irrigated land on the SSP's behalf. Of that Rs 7 per ha was to be fed back into the WUA's for expenses.

The cost of building the sub-minors is, according to government estimates, Rs 5,000 per ha for unlined and Rs 12,000 per ha for lined ones. It was assumed that farmers would take bank loans to do this. According to Talati, many farmers have already mortgaged out their lands and even if they haven't, the loan would be a collective one -- all lands would only be demortgaged collectively once the money is returned. The farmers, having seen the partially complete structures around them for years, were naturally sceptical about actually receiving water. So getting them to join WUAs and contribute towards building and operating the sub-minor structures proved difficult. The SSNNL is now reconsidering the issue and will perhaps build the structures themselves.

Moreover, not much was done by way of training and preparing the future irrigators to form associations and run the system. So the associations formed were simply committees without members. "We were only able to convince people to join once the water started flowing," says Kano Khura Patel, a WUA member in Sakaria village of Baroda. The farmers' associations as well as the SSNNL staff faced numerous problems when the water did flow. For one, the message given by politicians, like Jaya Behn Thakkar of Baroda district, before the elections was that water for the first season was free. This was not to be. And when the time came for recovery of costs, not everyone was willing to pay. To their credit, the SSNNL staff made a huge effort to collect payments and send out the message that this water was not in fact free. Many farmers had set up pumpsets and pipelines when they heard water was coming.

Another problem, according to Patel, was that the irrigation water was stopped at a critical time and people in Sakaria village lost a lot of their crops as a result. Phula Ambalal Patel had a different problem. The 9 km minor covered by the WUA in his area is one of the longest and five villages are involved. "Disparate voices, disparate interests were difficult to bring together. Since there were no gates or gauges with which to control the water, a lot of my lands in Ganatpura village were flooded," he complains. Sharing water and resolving conflicts was an issue that the project was not prepared for, since WUAs were supposed to deal with it.

According to the plan, the distribution of water is to be fully computerised with control rooms across the command area (CA). The control rooms are there, says Talati, but they have no equipment, no grids and no staff. The control infrastructure will take a long time to establish. He said a figure of some Rs 13,000 per ha per year is required to run this system. Volumetric water control will thus, for several years, have to be operated manually.

The entire CA was divided into 13 zones and supposed to have research stations for studying the soil and appropriate crops and irrigation for each area. Field trials and agricultural extension trainings were to take this knowledge to the farmers. This has not gone beyond the "research" phase, says Talati.

"What is happening negates everything we have learned in the last 50 years about what not to do," says Tushaar Shah of IWMI. According to Shah and other experts, even if the exigency of the drought is allowed for, there was a sense of "let's show" which led to the waters being released for irrigation, even though the infrastructure was not ready to receive it -- according to the admission of engineers working on the project. That this was done when elections were around the corner in November last year betrays the fact that political calculations were behind the move. With all the promises made by the to-be-elected, an idea that has taken root amongst farmers is that the SSP's need to supply water to them was greater than their need to use the water.