Marathwada has been struggling with acute fodder shortage, but the state government has not taken any step to counter the problem 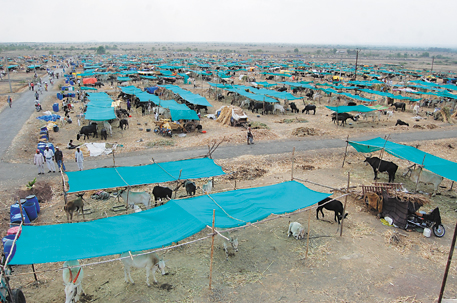 ON FEBRUARY 10, Maharashtra’s revenue minister, Eknath Khadse, made two announcements. He banned the sale of fodder outside the district where it has been produced and prohibited cattle herders from the neighbouring state of Gujarat from grazing their animals in Maharashtra. The decisions were taken to tackle the fodder shortage the state is facing.

Maharashtra has been struggling with droughts for the past couple of years. One of the many problems drought causes is fodder shortage. As a relief measure, the state government has been organising free fodder camps from March end every year. But the situation this year is so severe that farmers need the camps immediately. However, the newly elected Bharatiya Janata Party government has not given any indication that the camps will be held before the usual time.

According to the revenue department, 8,139 villages in the eight districts of Marathwada have recorded less than 50 per cent yield this Kharif season and the situation is not likely to change in the Rabi season. Rainfall in 2014 was 40-50 per cent of the normal levels. This is even less than the levels seen in 2012, when the rainfall was 60 per cent of normal and caused a severe drought. According to the Groundwater Surveys and Development Agency, the drop in ground water levels this year is a whopping 0.94 m more than the average decline in the past five years.

With scarcity looming large (see ‘Out of fodder’), the cost of fodder is rising. “Two years ago the government banned the sale of fodder outside the district it was produced,” says Bhumiputra Wagh of Usmanabad-based non-profit Samaj Vikas Sanstha, which works on issues related to farmers. “This helped farmers because it kept the prices low—at around Rs 5-6 per pendi (a 2 kg bundle). But this year, the prices are already Rs 12 per pendi. At this rate, farmers will have to spend Rs 120 or more per day on every adult cow or bullock,” he says.

For farmers who are in the business of milk production, the situation became even more difficult after the government reduced the rate at which it procures milk. “Since it came to power, the government has reduced the price of milk procurement from Rs 18-21 per litre to Rs 10-14. This, coupled with the high price of fodder, has made dairy a loss-making prospect. The farmers are more keen than ever to sell cattle,” says Pramod Jhinjhade of non-profit Mahatma Phule Samaj Seva Mandal. As a result, the price of cattle has fallen, he says. “Earlier, a good hybrid cow would fetch anything between Rs 40,000 and Rs 50,000. Now the price is down to around Rs 25,000. But still the sale of cattle is becoming increasingly common, says Wagh. “During the 2012-13 drought, 50,000-70,000 head of cattle were sold to abattoirs in 13 drought-affected districts. This year, fodder shortage has triggered the process in March itself,” he says.

Mahadeo Appa Tambde, a farmer from village Dakshin Deoli in Usmanabad district, says the fodder in his village will last only till mid-March. “We need the camps now, but there has been no announcement from the government and people are beginning to get desperate. We will either have to take our cattle to places that still have water and fodder or sell them.”

Ganesh Deshpande, deputy commissioner, fodder development, animal husbandry department, says that according to government estimates, fodder situation in the state is the same as it has been in previous years. However, he also admits that there is no agency in the state that carries out a survey to determine the drought situation and the government figures are based purely on estimates. “According to these figures, the situation is under control till the end of March, after which government will take a decision on starting fodder camps,” he says.

T B Survase, deputy secretary for relief and rehabilitation, revenue department, says that the decisions announced by the revenue minister had actually been taken by the previous government. “The minister has only announced that these decisions will be implemented. Detailed decisions regarding their implementation are yet to be taken.”

“Even if the government does set up fodder camps, the quality of fodder it provides is not up to the mark,” says Popatrao Pawar, former sarpanch of Ahmednagar’s Hiware Bazar village. “The fodder they provided is mostly sugarcane, which is not just hard to chew but also detrimental to the health of animals. Many animals die or become ill from eating it.”

Deshpande says cash crops, such as sugarcane, and fruit orchards have aggravated the problem of fodder shortage in the state because they do not produce viable fodder. “Worse, packaging of fruits requires a lot of grass that could have gone to animals,” he says. Deshpande says his department provides 100 per cent subsidy on cultivation of perennial fodder crops like napier grass and African tall varieties of corn. But farmers say these crops are water intensive and do not grow in drought areas.

Parineeta Dandekar, a water expert from non-profit South Asia Network of Dams, Rivers and People, agrees that sugarcane cultivation is a big drain on the region’s precious water resources. This water can be used to boost fodder security. “This year, at a conservative estimate, 70 sugar factories in Marathwada have used 23.1 million cubic metres of water to crush 15.43 million tonnes of sugarcane produced in the region,” she says, adding, “This amount of water is sufficient to irrigate 8,000 acres of groundnut (one acre equals 0.4 hectare) and even larger fields of jowar or corn—and these crops provide good quality fodder.”

This is also corroborated by D M More, former director general of Maharashtra State Water Resources Department. The water required for irrigating 0.4 hectare of sugarcane is sufficient to irrigate 4.9 hectares of jowar, says More. “At present, the amount of water being consumed by sugarcane is equal to the entire storage capacity of all the dams in the state.”

Watersheds can be a great help in enhancing fodder security, says Pawar. He has been successfully developing watersheds in his area and says that a major part of the fodder requirement of the village is being met by the greenery around the local streams.

“Watershed development has great potential in creating fodder security, but the new government is yet to show any enthusiasm in this area, ” he says, and adds that barring his village and a few surrounding ones where watershed development has been carried out, the entire region is in the grip of acute fodder crisis. “Usually, migration due to drought starts towards the end of March, but this year people have already started moving. Unless steps are taken now, the situation by the end of March will be even more severe,” he says.