Stink in the leather belt

Calcutta Leather Complex has shifted from the heart of the city to the outskirts on Supreme Court order, but it fails to treat toxic effluent and solid waste

Stink in the leather belt 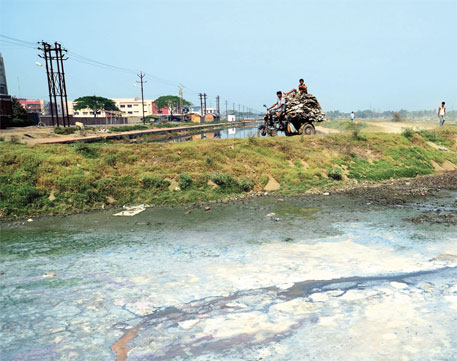 Twenty kilometres from Kolkata, on its southeastern periphery, the leather complex is a living hell. Back in 1995, the Supreme Court had ordered 538 polluting tanneries, operating in the heart of the city, to relocate to the outskirts. It had also laid down guidelines for the tanneries to treat waste. In 2005 the Calcutta Leather Complex (CLC) shifted from Tangra, Topsia and Tiljala to Bantala. But it is business as usual.

A visit to the 445-hectare (ha) CLC leaves one sick with nausea. The smell of chemicals used to treat leather hangs heavy; the storm water canals are choked with rotting animal hair and fat; and the omnipresent plastic. At places where the canal water is visible, it is either dull red with blood, dyes or chromium, or shines in grimy bubbles.

Inside the walled units, workers use a host of chemical processes to treat leather, but without even the bare minimum protection of gloves. There are 308 tanneries operating at CLC. Of these, about 70 are new. Many small tanneries which shifted to Bantala did not get no-objection certificates from the West Bengal Pollution Control Board (WBPCB) because the common effluent treatment plants (CETPs) did not have the capacity to treat so much wastewater, says a tannery owner who did not wish to be named.

Now, a host of illegal units process leather shavings outside CLC and right next to the ecologically sensitive Ramsar site of East Kolkata Wetlands. These units burn and boil shaving dust (byproduct of finished leather products), flesh linings and trimmings to make fertiliser and fish feed. Presence of chromium in these can pollute surface water and leach and contaminate groundwater, stated an inspection report of the Ministry of Environment and Forests (MoEF) in 2009. The report had suggested immediate removal of dumped waste to the common solid waste disposal facility. The suggestion was never implemented.

In its first ever environment audit in 2010-11, the Comptroller and Auditor General (CAG) rapped the state and Central authorities for failing to relocate CLC properly.

In 1995, the state government set 1997 as the deadline to complete the project. Developer M L Dalmiya & Company Ltd missed several deadlines, even the 2002 deadline set by the apex court. When the company failed to set up CETPs, the state government had to construct it. This apart, the developer sold land to many tanneries at over Rs 1,800 per sq m instead of the stipulated Rs 600 per sq m. To the IT firms, it sold land at Rs 3,000 per sq m.

At present, four of the seven components of waste treatment are still incomplete, the CAG report tabled in Parliament in October last year states. “The project failed to achieve its stated objective of ensuring safe disposal of industrial effluent and solid waste from tanneries, causing immense damage to environment,” the report notes. 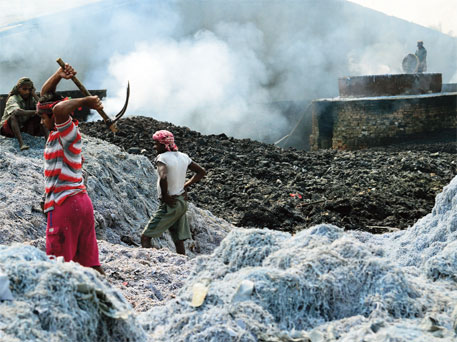 The state government planned to set up six CETPs which could treat 30 million litres per day (mld). But two were not even sanctioned, reducing the treatment capacity to 20 mld. This apart, the pumping capacity of treated effluent is only 7 mld, limiting the actual treatment of liquid waste. The state government has not yet sanctioned a safe solid waste disposal system, and a treated effluent sump and pumping station (TESPS) is still incomplete, the report states. Most tanneries do not pre-treat waste properly, which involves seperating animal waste from liquid waste. This has choked effluent transportation systems at some locations. The report notes that some tanneries bypass the effluent transportation systems and discharge untreated waste directly into storm water drains.

The tanners’ association, in-charge of running CETPs, “is illegally depositing sludge on the land earmarked for CETP modules 5 and 6... Only 15 mld wastewater was reaching CETPs... a major portion of the effluent was either percolating to the groundwater or creating cesspools,” the report states.

But Binay Dutta, chairperson of WBPCB, says, “Surveillance on our part is high. Our teams regularly monitor groundwater”. However, several tanneries have been fined for non-complaince, he says. Last year alone, WBPCB issued closure notices to 18 tanneries. These were violating standards for Ph level, total suspended solids (TSS) and chromium. 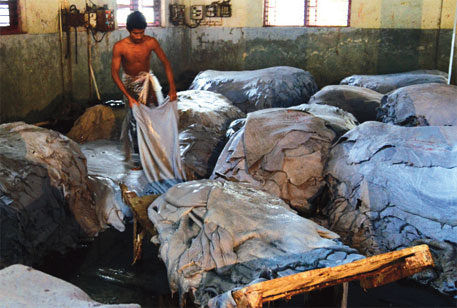 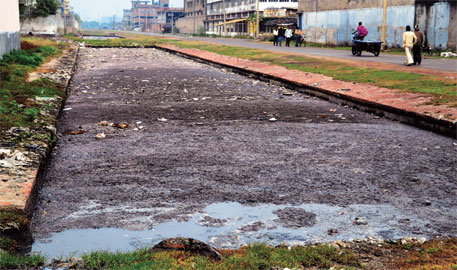 While the standard TSS level is 600 mg/litre, some tanneries had TSS levels as high as 2,400 mg/l. The standard chromium level is 45 mg/l, but some had 190 mg/l. The units found an easy way to wriggle out of the mess. They paid Rs 25,000 fine and got the closure notice revoked. The WBPCB inspected How Fa Tannery thrice. In July 2012, it found TSS and chromium levels as high as 10,820 mg/l and 1,155.3 mg/l respectively. On July 16, the unit was given closure notice with disconnection of electricity. Within a month, the closure notice was revoked and electricity reconnected.

What comes as a shock is non-complaince by the CLC tanners’ association which is in-charge of running the CETPS. Tanneries are required to do the pre-treatment before sending effluent to CETPs. Pre-treatment involves segregating suspended solids and chrome recovery. CETPs do the final treatment before discharging it to the canals.

The report states that three of the four CETP modules are not fully functional. The WBPCB officers found effluent at the common outlet turbid. Fine of Rs 20 lakh was imposed on the tanners’ association for non-compliance.

Another WBPCB order notes that of the 30,990 tonnes of hazardous waste generated by CETPs till April 2012, only 2,565 tonnes were sent to Haldia to treat solid waste till April, 2012. Ramesh Juneja, president of CLC Tanners’ Association and owner of J C Tanneries, was admitedly ignorant of how much solid waste is treated at the Haldia facility. He blamed long power cuts for CETPs’ failure to treat waste. Solid waste management is the state government’s responsibility, he says.

In his study, Dipankar Chakraborti, School of Environment Studies, Jadavpur University, found evidence of hexavalent chromium in groundwater samples near CLC. “Hexavalent chromium is a known carcinogen and can have potentially disastrous effects on the human body, ranging from lung cancer to damaging the respiratory tract,” he says. A 2009 inspection report of MoEF Bhubaneswar office stated that hexavalent chromium in treated effluent is much higher than the prescribed limits and in gross violation of norms.

Samudra Dutta, trade union leader at CLC, agrees that individual tanneries often do not pre-treat waste. But he is more worried about the unhealthy working conditions at the tanneries. Despite the 1995 Supreme Court order, there is no hospital for the 12,000 workers. There has been no study on skin diseases in workers, he says. Chemicals such as sodium sulphate, iodate soap, sulphuric acid and chrome powder are used to process leather. Constant nausea and burning in the eyes are common among workers. Very few units supply them with protective gloves, boots or masks.

Right behind the tannery complex, Shyamal Naskar, a farmer, complained of reduced paddy yield due to water laden with chemicals and salts. The tannery complex cut off water supply to paddy fields from the nutrient-rich East Kolkata Wetlands.

Ashis Mandal gave up farming in his 3 ha land. According to estimates by local farmers, about 2,000 ha farmland has been affected after CLC shifted to Bantala, and paddy yield has reduced by more than half. To ameliorate the situation, what’s required is a comprehensive study on CLC’s impact on ground and surface water and on the Ramsar site of East Kolkata Wetlands.