Industrial effluent is contaminating Gujarat villages, but the authorities have not nailed the culprits 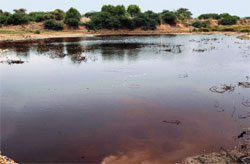 Residents of a small village in Gujarat once banked on a lake for irrigation. Today, the revered Wrun Mukteshwar Mahadev Temple lake has turned violet. People of Nodhana in Bharuch district say seepage of industrial waste from a nearby effluent channel has contaminated the lake and fields over the past two decades.

Forty-six industries, most manufacturing chemicals and dyes, in Vadodara and Bharuch districts discharge treated effluent into the Gulf of Khambhat through the 55-km masonry channel (see map). The channel was built in 1983 by Effluent Channel Project Limited (ECPL). Currently, an estimated 300 million litres of effluent, treated at a common plant, are discharged every day into the Gulf.

Girish Patel, a Nodhana resident, has often complained to the local administration about the nuisance the channel has created. Realising this, ECPL reduced the length of the masonry channel to 46.5 km in 2004. The route of the remaining section of the channel, which passes through Nodhana, was diverted using an underground PVC pipeline. But industrial units along the stretch in Jambusar taluka (Bharuch district) and Padra taluka (Vadodara district) discreetly discharge untreated sewage into the smaller section of the masonry channel. 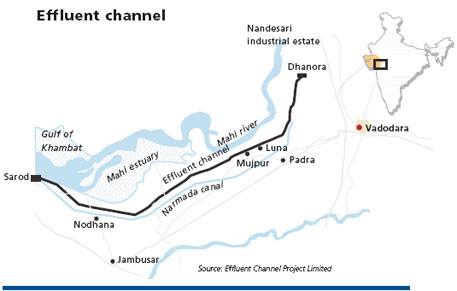 From 2004, ECPL started cleaning the lake annually as part of its corporate social responsibility, says Satish Panchal, CEO of the company. “But every monsoon effluent seeps through the pipeline and enters the lake,” points out Girish.

This May Gujarat Pollution Control Board (GPCB) and Bharuch administration sent a notice to ECPL after receiving a complaint from Nodhana panchayat that the pipeline has put fields and water sources at risk. ECPL, however, says it has no knowledge of any such notice.

Although the local administration admits the pipeline has caused damage, it says the line is vital for industrial units. “Residents want the channel closed. But it is not possible,” says K P Soni, sub-divisional magistrate for Jambusar. “The problems have been sorted out. We have also sealed the contaminated borewells. ECPL too has worked on its faults,” adds Soni.

In 2004, there was a flood-like situation in Nodhana. As a result, effluent settled in the low-lying areas of the village’s commonly owned mango orchard, a source of income for 2,500 residents. Following this, local administration closed 11 borewells. “The administration said they were contaminated but no one paid for the crop losses we suffered,” recalls Chandrakant Patel, sarpanch of Nodhana.

ECPL officials says, “The issues have been resolved. There are two or three trouble makers in the village, who have been claiming undue compensation from us.” Some of the pharma factories operating in the region say residents use the effluent water to irrigate their fields just to get compensation (see: Polluters get away by making ad hoc payment to farmers).

Nodhana and Luna village in Padra share a similar story. In 2009 and 2010, Central Pollution Control Board (CPCB) found 45 contaminated borewells in Padra. Its 2010 report states, “The quality of effluent deteriorates towards the end of the channel, raising suspicion that downstream factories are discharging their effluent without treatment” (see ‘Ground reality of industrial waste’). Environmental engineer Pratik Bharne has stated in the report that the quality of the effluent discharged is no better than that of the effluent discharged by final effluent treatment plant in Ankleshwar or common effluent treatment plant in Vapi—two of the most critically polluted areas in the country. Taking note of the situation, the Vadodara district administration ordered sampling of the borewells earlier this year. 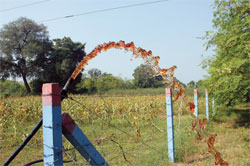 GPCB also approached the Institute of Seismological Research in Gandhinagar and the Maharajah Sayajirao University in Vadodara to study aquifers of Luna. A researcher, involved in the study, says there is little scope for a complete review. “We have been asked only to determine if a particular textile dye manufacturing unit has been polluting groundwater by reverse boring,” he says. The unit has also contaminated the soil through leachate. The company does not store its solid waste properly; it dumps it very close to the premises, says the researcher. “But due to non-availability of equipment and limited scope for study, we cannot estimate the extent of pollution caused by leachate,” he adds. R B Trivedi, GPCB regional officer, says the findings will be available within two weeks. “Based on the complaints of the residents, two factories are now suspected to be the polluters,” he adds. Even before the source of the contamination could be ascertained, compensation has been given to 30 farmers in Luna on humanitarian ground by Huntsman Chemicals and Dyes Manufacturers, and Amoli Organics Pvt Ltd. “We are not sure if this is a one-time or an annual compensation,” says Ghanshyam Patel, who was offered Rs 6 lakh.

Talking about the ground situation, Trivedi says the channel is old and needs periodic repairs. “Repairs mean the industries will have to stop production till work gets over. Besides, there are a few rogue pharma and chemical dye plants that discharge the effluent in fields,” he says. Residents too, at one of point of time, were using the effluent water for fields, he adds. Panchal says in the past one year five pharma and two agro-chemical industries have been fined for dumping untreated wastewater into the effluent conveyance system. However, action is yet to be taken against industrial units for the violation of the Water (Prevention and Control of Pollution) Act of 1974 and the Environment Protection Act.