Soligas harvested forest produce. For them, it was a sustainable business. Then, irrationally, government moved to 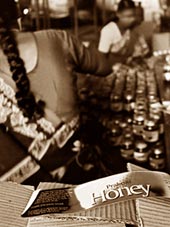 A single letter shot off by the Karnataka government to the Bilirangan Temple Wildlife Sanctuary (brt) has brought 25,000 Soliga tribals subsisting on non timber forest produce (ntfp) to the brink of destitution. The government notification, in adherence to the recently legislated Wild Life (Protection) Amendment Act, 2002, has banned collection of ntfp for commercial use. More than 7,500 Soliga families, living in and around the protected area that is also home to the infamous sandalwood smuggler Veerappan, are now preparing for a siege to protect their rights.

The amendment to the Act was notified by the Union government in January 2003. The state government's notice informing the various state departments concerned came in early February 2004. Following this, deputy conservator of forests (wildlife wing), Chamrajnagar, B K Dixit, sent a letter towards the end of February banning the sale of ntfp through the Large Adivasi Multipurpose Society (lamps). The government had created lamps under the state forest department to collect and sell ntfp, besides managing other activities for the state's tribals.

In a reiteration of the government's intent, a notice was sent to all the states on July 2, 2004 by the Centrally Empowered Committee (cec) on forests set up by the Supreme Court (sc) asking all states to adhere to the rulings of the sc and the provisions of the Wild Life (Protection) Amendment Act, 2002. The cec is empowered to ensure implementation of sc's orders in a particular forestry case with which many wide-ranging issues on forestry and wildlife have also been clubbed. While the cec took a mere 'legal' stand, its letter has precipitated the matter as the governments always wish to stay on the right side of an active higher judiciary.

The earlier Wild Life (Protection) Act, 1972 took a different approach: it allowed collection of ntfp from sanctuaries with the permission of the chief wildlife warden of the state. Even then, very few chief wildlife wardens across the country had the pluck to allow collection and sale of ntfp against the unwritten convention of the forest bureaucracy to deny all such rights to the people (traditional or not). In many sanctuaries, the collection continued unabated, though illegally.

But brt was an exception. It has been perhaps the biggest and the best experiment in sustainable use of ntfp -- something that the revised 1988 forest policy of the country also promotes. brt is one of the few sanctuaries where the extraction of ntfp has not only been systematically run but also closely monitored for a decade by the forest department, ecologists, non governmental organisations into conservation as well as groups engaged in rural development in the region. It is arguably the country's only sanctuary for which all the observing groups unanimously agree that the collection of ntfp is a sustainable source of livelihood for the tribals.
Spread over 540-square kilometres, brt lies between the Eastern and the Western Ghats. The Soligas migrated from the Nilgiris centuries ago and settled here, says Dixit. Once the area was declared a sanctuary under the Act, they were 'allowed' to practice shifting cultivation and were engaged as labour in various forestry operations and plantations. Primarily a hunting-gathering tribe at the time, the Soligas gave up hunting but continued to gather forest produce, including honey and lichen.

Today, some of the Soligas live inside brt in nine podus (hamlets) with not more than an acre per family (that too, not for all families) to practice subsistence agriculture. The rest of them are settled on brt's periphery in 48 podus. They avoid ploughing the land mechanically and resist using fertilisers or weeding of land. In case of at least one podu -- Mondkainatha -- ploughing is done with the fingers after the rains. The old belief of not tilling "Mother Earth" holds strong while they continue to worship their tree god "Doda Sampige". They mainly grow ragi and coarse cereals. In this era of market economy and vast food banks, Soligas still do not like to store grain and depend upon income from the gathering of forest produce for nearly nine months.

lamps regulates the collection of the forest produce, purchases the produce at fixed rates and then auctions it off. Before the lamps was created, the tribals used to sell the produce at a pittance to a city contractor who had bagged the rights for collection from the forest department. Over the last eight years, the arrangement with lamps has developed into a systematic process with the involvement of two non-governmental organisations: Vivekananda Girijana Kalyan Kendra (vgkk) and Ashoka Trust for Research in Ecology and Environment (atree). vgkk has been organising the tribals into self-help groups, and ensuring value addition of ntfp such as packaging honey into bottles. atree has been monitoring the impact of ntfp extraction on forest health as well as working with the tribals to develop a participatory self-monitoring mechanism.

Says Venkat of vgkk, "It's taken us two decades to set up this entire infrastructure. Now we have a secondary high school for the Soligas, a primary health centre and a honey-processing factory; we provide alternative employment through other vocational activities. In the last two years, we have in fact ploughed back profits to the community from our activities. And now all this will come to an end? What is the logic of such a decision? What alternatives do the people have?"

Siddapa Shetty, an ecologist who has been carrying out research in brt for the past eight years adds, "We have monitored their extraction of honey as well as amla for the past eight years. But let's be clear, we didn't have to come and teach them what is sustainable harvest and what is not. They are very selective and systematic about how they go about collecting lichen, amla as well as honey. It is not a random and certainly not a rampant exploitation. Our studies show that they harvest only 29 per cent of the fruits of P emblica (one of the two varieties of amla) each year and only 60 per cent of the fruits of P indofischeri (the other variety). The percentage of overall collection of fruits in brt is low and does not seem to have a negative impact on regeneration of the fruiting trees (one measure of sustainability of extraction)." In fact, says Shetty, studies show that the Soligas of brt are far more advanced in their collection practices than the tribals in some of the other forested regions of the Western Ghats.


C Madagowda, a Soliga who studied in the vgkk school, went on to do his Masters in Social Work at a regional university and now has come back to work for atree, is indignant: "What will my people do? What are the options before them? Even before we have been apprehensive of being shunted out because the forest department wanted to declare this a Project Tiger area, a pre-requisite to which is that all tribals move out of the sanctuary." He points to the irrational provision of the ban that extraction can only be for personal consumption. "Now are we supposed to eat 10 kgs of honey and five kgs of amla each day for three months and live on nothing for the rest nine to qualify as extracting for personal use? Let those who make such laws in Delhi show us how to do so."

Dixit has tried in his own way to help the tribals. He has played a legal manoeuvre by saying in a letter to the forest department that the extraction is not commercial but only for sustenance as the tribals do not make profits but only get wages for collecting ntfp. The state government is taking its time mulling over Dixit's interpretation.

But is the future of the 25,000 people supposed to remain tied to legalese, or are the Union and the state governments going to follow scientific proof instead of a narrow interpretation of an irrational law? Madagowda says, "We cannot sit too long and wait for things to precipitate. We will hit the streets of Chamrajnagar and Bangalore if the government refuses to listen to us just because we do not make up a substantial vote bank." Is this wildlife sanctuary too going the way that dozens others have -- become battlegrounds for rights ?