Strangers in their own land

The final notification of the Great Himalayan National Park has jeopardised the livelihood of a tribe of migratory pastoralists. It has also cornered people of 130 villages in their own land on the name of biodiversity conservation

Strangers in their own land 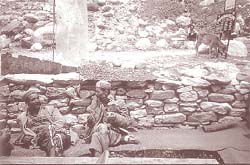 following a Supreme Court order calling on state governments to finalise the pending notifications of national parks, the government of Himachal Pradesh finally 'notified' the Great Himalayan National Park ( ghnp ) on May 21, 1999. Consequently, pastoralists of the Gaddi tribe of the Himachal region, who migrate according to the season, have lost access to their traditional pastures. They have also lost the right to graze their livestock in the park. The livelihood of people from 130 villages in and around the park has also been affected by the move.

According to Sanjeeva Pandey, director of ghnp in Kullu, " Gaddi s will have to give up these pastures, sell off their livestock or eat them." The forest department has made it clear that the Gaddi s entering the forest will be put behind the bars. "It looks like a tractor has been used to wipe out the grasses in the park," complains Pandey, clearly conveying his displeasure with the Gaddi people. Gaddi s, who have no alternative to these pastures, have not occupied the alpine pastures this year. Traditionally, the Gaddi people move to high-altitude pastures in summers as an essential survival practice. The alpine grasses are believed to be extraordinarily nutritious for their livestock. The alpine pastures of ghnp constitute a large area -- almost half the park -- and host an estimated 35,000 sheep and goats every summer. A major flaw in the way conservation is perceived in India is pointed out by Vasant Saberwal, a researcher from Oxford University, who has written about the conflict between Gaddi s and the forest department in his book Pastoral Politics . He says it is a common misunderstanding of the forest department is to see grazing as a major threat to the forest biodiversity, adding that it is a legacy of the colonial days, when grazing was simply seen as being incompatible with the production of timber and a blanket ban was put on grazing.
Iqbal Singh, director of the Society for Advancement of Village Economy ( save ), a local non-governmental organisation ( ngo ), says the people of the 130 villages have threatened to burn the forest if their entry is restricted. The final notification has affected the lives of an estimated 11,000 people without any prior notice. Singh says that the residents of Tendi and Seri villages feel so dejected that they have asked the forest department to give them poison instead, because they cannot rear their children without access to the forests. Recently, the villages have decided to file a public interest petition against the state government, seeking the restoration of their traditional rights to the forests.

The first notification of ghnp was in March 1994 under the Wildlife Protection Act (1972), on the ground that the area is of great ecological, faunal, floral, geomorphological and geological importance. In its Red List of Threatened Animals , the World Conservation Union ( iucn ) has mentioned the the Himalayan tahr ( Hemitragus jemlahicus ), the western tragopan ( Tragopan melanocephalus ) and the serow ( Capricornis sumatraensis ). A researcher from the Wildlife Institute of India, Dehradun, says that the western tragopan in particular is limited to the western Himalaya and the ghnp formed an important part of its habitat. Among the plants found in the park, the Himalayan yew ( Taxus baccata ), the source of an important anti-tumour drug, is also threatened due to overextraction. However, the government's commitment to conservation looks shallow in the light of the denotification of a 90-sq km-area of the park -- equally rich in biodiversity -- for a hydel project (see box: Malleable ecological concerns ).

Till July 1999, the forest department had not bothered to inform the affected people. It was save that informed the people about the government's move. According to the ngo , most Gaddi s could not be informed about the declaration because of their migratory lifestyle.

Pandey argues that the villagers had been informed and were prepared since 1994 through an ecodevelopment programme launched with the assistance of the World Bank with funds worth us $2.5 million.The programme, sanctioned under the Forestry Research Education and Extension Project ( freep ) with the state forest department as the implementing agency, is aimed at conservation of biodiversity. Singh of save points out that though the eco-development looks good on paper, it has been failed to put forward any demonstrative activities to convenience the local people.


The programme tries to lure people through income-generating programmes such as ecotourism, poultry, beekeeping, weaving and tailoring as an alternative to relying on the forest. save has been working in the villages of ghnp for the past eight years and was called upon by the forest department in 1998 to help in building capacities of the village ecodevelopment committees ( vedc ). Singh says that the microplans, the 'development plans' supposed to be prepared by the vedc s, are rejected by the people, who see serious flaws regarding their role in its preparation.

"Rearing cattle pays better in these mountains," says Lochan, a 56-year-old herder, who also owns some land in village Bathad. He points out that in the absence of a market near the village, poultry or tailoring will not generate sufficient income. Moreover, Lochan says he is too old to understand the ways of ecotourism or to carry a rucksack of a moody tourist. Singh says the people are confused about the very concept of the programme because it projects the national park as an amusement park.

The World Bank has been promoting ecodevelopment as an important 'participatory exercise' and sees the programme as a 'model for future projects'. But there is already criticism that the involvement of the local people in the project is farcical, that the people have not been involved at the planning stage but only at the implementation level. This being the last year of the project and the villagers saying no to it, the forest department reacted by deciding to implement the project on its own, says Singh.


"I am nearing 60. I am too old to visit all these villages," says Tula Ram, the 57-year-old forest guard who has to cover the farthest of villages under the ecodevelopment programme. Forest guards, who are supposed to play a key role in implementing the programme, are disappointed by the forest department's stand.

As there are no additional incentives for them in the project, they are not interested in taking up additional work of forming ecodevelopment committees. It is too much to expect a forest guard, who is hardly interested in participating in the programme, to proactively work on the people's parti-cipation. Moreover, the relationship between the residents and forest guards has been plagued by contrasting interests; trust and confidence do not seem to come so easy.

P K Sen, director of Project Tiger, says the ecodevelopment programme is not forcing people to leave their forests and that it is a people-friendly programme. The forest department defines relocation as only the physical relocation of the habitat. It seems to ignore the fact that the curtailment of traditional rights to resources implies involuntary displacement of the people.