Pesticides: what's the way out? 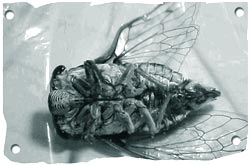 Modern agriculture: the boon and the bane of India's teeming millions. The boon, because it has ensured that the nation's crop fields remain fecund. The bane, because it has bred a poison that is seeping into our veins through the food we eat and the water we drink. Every day. Every moment.

Pesticides and fertilisers, used indiscriminately to coax the land into producing more, have backfired with lethal environmental impacts: excessive mortality, reduced reproductive potential in organisms, changes in diversity of species and ecosystems, and the development of pesticide resistance in target as well as non-target species. Through our crop fields, the poison has seeped into our food chain and is present everywhere -- in milk products, vegetables, fish, grains, meat, groundwater, even in breast milk.

Studies have shown that less than 0.1 per cent of chemical pesticides in India reach the target pest. The remainder is absorbed by -- and devastates -- humans, livestock and the natural biota ('Role of biopesticides in environmental safety, Science and Culture , May-June, 2000). Assuming 0.1 per cent as the effective usage rate for chemical pesticides, pesticide pollution in India could be in the range of an incredible 45,000-50,000 tonnes per annum.

This, despite our limited use. Per hectare consumption of pesticides in India is only 0.57 kg, which is miniscule compared to that of USA (about 3 kg), Taiwan (17 kg) or Japan (10-12 kg). About three quarters of pesticide use occurs in developed countries. The pesticide market in these countries is dominated by the relatively less toxic herbicides. India, on the contrary, uses cheap (not under patent protection), high-potency organophosphate and organochlorine-based insecticides, which are notorious for their acute toxicity, non-biodegradability and bioaccumulative properties. Worse, about 50 per cent of the pesticides used in India are targetted not at increasing yields of foodgrains but of cotton, which has export potential. It has nothing to do with food security.

This is not all. India also produces, uses and trades in pesticides which are banned or whose use is restricted in some nations because of their deleterious environmental or health impacts: between 1998-2001, the country produced more than 40,000 tonnes of these poisons (see table below: Made in India). According to the ministry of agriculture, of the 180 registered pesticides in India, 32 (about one-sixth of total pesticides used) have been banned in other countries. Monocrotophos, a highly toxic insecticide whose registration was canceled in the US in 1988, is India's top-selling pesticide.


Of course, there is also the usual production knot: bulk of the country's pesticides is produced by the unorganised sector, which has inadequate facilities to treat the toxic and non-biodegradable pollutants generated by the manufacturing process. Incineration, which is being promoted as a panacea by the central pollution control board and ministry of environment and forests, is hardly a solution: it can release poisonous compounds like dioxins, monitoring which is difficult in India.

One of the alternatives before industry is a shift to biopesticides -- pesticides derived from animals, plants, bacteria and certain minerals. Inherently less harmful and polluting than their conventional cousins, biopesticides, when used as a component of an integrated pest management (IPM) programme, can bring down the use of conventional pesticides while keeping crop yields high. In fact, the US promotes the alternative widely as integral to its IPM programmes; in 1998, it had more than 175 registered biopesticide active ingredients and 700 registered biopesticide products.

India's pest management community, however, remains blissfully unaware of the potential of biopesticides. Most state agricultural universities, on whose recommendations pest control methods are promoted, have nothing to say about biopesticides in their counsel. In the absence of active promotion and production incentives by the government, the demand for these products has not developed. As a consequence, dealers do not stock biopesticides and farmers have no access to them.