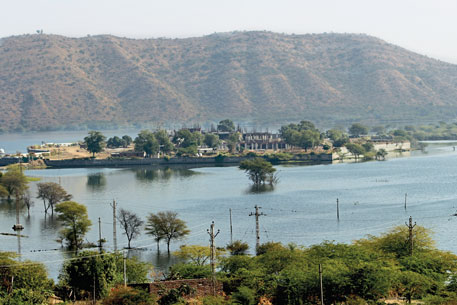 UDAIPUR, THE historic capital of Rajasthan’s storied Mewar region, is known as the Venice of the East for its lakes. Maharana Udai Singh II founded Udaipur in 1559 and built a chain of lakes to make the rainfall- deficient city self-sustainable in water supply.

While Fatehsagar and Pichola are more visited landmarks, just outside the city’s municipal boundary lies Udaisagar, which is in grave danger of dying. Being the last in the chain of lakes, Udaisagar is fed by the overflow from upper lakes such as Pichola and Fatehsagar (see ‘Udaisagar’s threatened catchments’). Several seasonal streams also flow down the catchment hills, spanning 479 sq km, to replenish Udaisagar. But over the past three decades, the catchments of Udaisagar and other lakes have degraded. Tej Razdan, convenor of Jheel Sanrakshan Samiti (JSS), an Udaipur-based non-profit, says that according to data available with his organisation, of the total catchment area, 10-15 per cent has been encroached upon in the past decade. In the same period, 15 per cent of forest cover has been lost. Moreover, he adds, the water bodies atop the Aravalli hills that feed these lakes have been choked with marble slurry deposited after marble mining. A number of national and state highways also pass over the catchment hills. All this is affecting the water flow from upper lakes, reducing the water level of Udaisagar, says Lakshmi Lal Sharma, retired lake expert from the Maharana Pratap University of Agriculture and Technology in Udaipur. Reduced rainfall in recent years has compounded the situation, he adds.

The lake is also being threatened by increasing pollution, says Pradeep Kumar Singh, professor at the university. The Ahar, a tributary of the river Berach, is the lake’s major source of water. But more than water, the Ahar brings domestic and industrial waste into the lake as it passes through Udaipur city. Hindustan Zinc Limited located in the vicinity of Udaisagar, extracts the lake water and releases its untreated effluents into it. The biological oxygen demand (BOD), a parameter used by scientists to understand the pollution level of the lake, reaches as high as 65 mg per litre which is almost 20 times the permissible limit. The reduced amount of water in the lake has taken away its self-cleansing power, says Sharma, adding that the lake is majorly eutrophicated. The polluted water is highly acidic and affects the groundwater of the neighbouring villages in a diameter of 21 km. For instance, the water in the wells of Bichari village is not potable at all and can’t even be used for irrigation.

But revival of the lake seems seemingly distant. There is an island in the middle of Udaisagar where rampant construction is happening and even the Supreme Court has given the go-ahead. Conservationists say the island is an important catchment area for the lake and concrete structures on it would permanently affect the lake’s ecology.

Till a few years ago, farmers lived on the island and farmed on it. In 2008, Vardhan Enterprises, a Mumbai-based developer purchased most of its land and started to construct a five-star hotel on it. In 2010, Rajendra Razdan, lawyer for JSS, moved the Rajasthan High Court against the construction. Since 1999 Razdan has filed several petitions in the high court to save Udaipur’s lakes. In 2012, the court fined the developer Rs 1 crore and asked city authorities to demolish the illegal construction. The developers moved the Supreme Court in 2014. 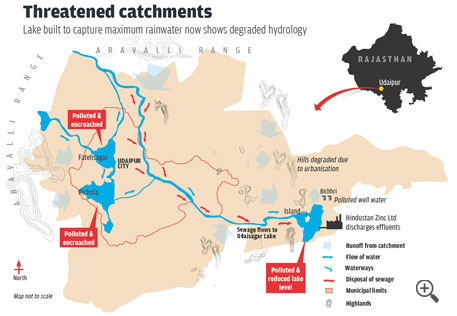 The developers were desperate. They told the apex court that the construction site was not a “true island”. It was “an island-like area” formed by siltation, explains Razdan. “They justified that they had in no way fiddled with the ecology of the lake. The Supreme Court has agreed. The developers have restarted construction and we can see many structures on the island,” he says.

According to environmental lawyer Sanjay Upadhyay, the toothless Wetland Rules 2010 is responsible for such a fate of the country’s lakes and wetlands. Under the Rules, a wetland and its drainage or catchment area need to be notified by the Centre. Since water is a state subject, the first step of this notification starts with the state government identifying them. Upadhyay says this is where the law is missing its efficacy. If the state fails to identify the wetland or its catchment then the wetland might be easily killed.

This is exactly what has happened in the case of Udaisagar, says Ram Niwas Mehta, secretary, Urban Improvement Trust (UIT) , the body responsible for the overall development of Udaipur. As the laws failed to save the lake through catchment protection, it has had to be dragged to court more than once in the last two years, adds Mehta.

JSS believes that the UIT had given permission to construct the hotel due to pressure from influential people. In 2009, UIT changed the land use of the island from agriculture to commercial under the Rajasthan Vidhiya Sanshodhan Adhiniyam, 1999. In 1999, the UIT had prohibited conversion, regularisation or allotment of land which came under the water flow area or the submergence area of the lake.

JSS is hopeful, though. In November 2014, the apex court passed an order saying that no construction could be done in violation of the 2013 Udaipur Building By-law in the city’s municipal area. Since the by-law prohibits construction on the submergence area of islands located in lakes, JSS activists say that all construction activities on the Udaisagarisland should be stopped immediately. Unfortunately, Udaisagar is located outside the municipal area and the order may not be applicable to it. Tej Razdan says they need support from eminent environment lawyers. Or else, another lake would be killed. In January, JSS appealed to the apex court to review its order and extend its scope to prohibit constructions on Udaisagarlake.