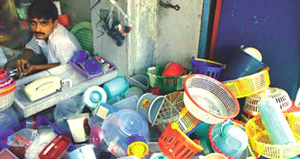 If the annual plastic consumption in India rose by as little as one kilogramme per capita, the total demand would increase by about one million tonnes. The plastic industry looks forward to encashing this market potential. High profits and increasing demand ensure it grows exponentially

"It took us (India) 30 years to consume the first one million tonnes of plastics. The second million tonnes were consumed in only five years. By 2007 we will consume seven million tonnes per annum."
-- A joyous Mukesh Ambani, vice chairperson and managing director of Reliance Industries Limited, at Plastindia Foundation meeting in Mumbai in 2000.

A leader of multi-crore industry, which grows each year by more than 20 per cent, Mukesh Ambani, is bound to be happy. Come recession or economic boom, the plastic industry shows stupendous results year after year. Spurred by a demand that shoots up each year, the plastic industry knows it's bound for greater profits.

There is a surfeit of plastic products in our lives, from the blood bags used in the hospital to the gaudy coloured plastic pots that are fast becoming ubiquitous in rural India. All these plastic-based goods drive the demand curve for the polymers to a frenzied high each year. The largest end-user of plastics includes the packaging and poly vinyl chloride (pvc) pipes industry that are growing at 16-18 per cent per annum.

About four million tonnes of plastic or polymer was consumed in 2000-2001 in India to make various goods. That is about 500 times the weight of all the iron used in the Eiffel Tower. By 2006-07 it is expected to hit a high of 7.5 million tonnes -- nearly double in just four years (see graph: Shooting stars).

For an industry that made a modest beginning in 1957 with the production of polystyrene (ps), it has come a long way. The leading company in the field, Reliance Industries Limited is today poised to become the first Indian company to join the famed Fortune 500 list -- a list of top global companies. Along with Reliance a handful of other companies today supply India and other international markets with millions of tonnes of fresh plastic, which is referred to in industry parlance as 'virgin plastic'.


Reliance alone sold polymers worth Rs 5,385 crore in 1999-2000. Currently Reliance, the market leader, holds nearly 52 per cent of the market and is poised to garner a much greater share in the pie. With the government planning to disinvest in the government owned ipcl the second largest polymer manufacturer in India. Reliance is keen to claim a stake in it.

It was during 1986-1990 that the country witnessed investments worth Rs 30,000 crore being made to create large capacities in the polymer industry. Further, post-1990 a series of policy changes, such as relaxed licensing requirements for petrochemical products and reduced customs and excise tariffs, gave boost to the industry.

In India the demand for plastics is growing approximately at a rate of 22 per cent annually. India's present polymer production capacity is expected to reach 3.5 million tonnes by the end of 2003. With a promised increase in capacities and liberalisation of trade to help push the cart, Ambani's claim of India consuming 7.5 million tonnes of plastic by 2007 seems easily achievable. A mere one kg increase in per capita consumption of plastics in India would yield an additional annual demand of more than one million tonnes annually.

Such swamping figures generate a debate about the size of the environmental problem that plastics are capable of creating. Plastics do not degrade. They persist in environment and pollute, posing danger to public health. But industry is quick to quell any such fears by citing the fact that the annual per capita consumption of plastic in India, at two kg, remains much below the global average of 17.5 kg, or for that matter, the Asian annual average of 10 kg per capita. "An increasing per capita consumption of plastics of a country is indicative of its advancement. All efforts, therefore, should be made to increase the consumption of plastics," said Alok K Goyal of ipcl 's Kolkata regional office at a paper presented at the International Conference on Plastic Waste Management and Environment in March 2001 .The industry also dismisses fear arising out of the fact that more than one-fourth consumption of plastics in India today is that of pvc - a chemical which is being phased out in some countries.


But it's not just the virgin plastic manufacturers who have hit the jackpot in Indian economy. The unregulated, primarily small-scale and increasingly polluting recyclers of plastics also abound in the country. Industry estimates say nearly 45-60 per cent of all plastic waste is brought back to use by recycling virgin plastic-based goods. From discarded computer chip boards to polythene bags all go through repeated 'down-cycling'. Polypropylene (pp) and high density polyethylene (hdpe) are two polymers which get recycled the most.

R N Singh, director of Nagpur-based National Environmental Engineering Research Institute, says, "Almost 45 per cent of the total plastic consumed in the country gets converted to plastic waste." And about 45 per cent of this gets recycled. This is about 20 per cent of the annual polymer consumption or about 800,000 tonnes. This plastic reenters the market to be resold. As recycling is done repeatedly the volume of recycled plastic in the market keeps increasing . It, therefore, becomes a large enough chunk for the virgin plastic manufacturers to worry about as competition. But, manufacturers also use the recyclers to claim that waste in India is managed too well to complain about.

The recyclers in India also import a lot of plastic waste to regurgitate back into the markets. For the developed countries it works out perfectly. "The European Union norms do not allow members to produce more plastic than they can recycle. But they are allowed to produce if they export the plastic waste for recycling to other countries. They conveniently export plastic waste that they are unable to handle domesti-cally," says Kisan Mehta, president of Mumbai-based non-governmental organisation (ngo) Save Bombay Committee. A ' Briefing Paper on Pepsi, Plastic Production and Recycling' prepared by Greenpeace International way back in 1994 points out how plastic waste export from the us to India increased from 3,974 metric tonnes (mt) in 1992 to 7,841 mt in 1993 - an increase of 97.3 per cent in just one year. While India allows import of plastic waste only under licence a substantial amount of it is illegally imported. This fact was also high-lighted by the high-powered committee on the management of hazardous wastes set up by the Supreme Court of India in 1997. In 1994-95 it reported 24,240 tonnes of plastic scrap was imported illegally.

These recycling units, the manufacturers of virgin plastic and its innumerable processors together pose a question for the government: how can the environmental fallout of this growing sector be curtailed?