Tanking up on water

Tanking up on water 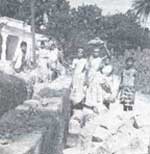 PARCHED brown fields, often empty, dry paddy stalks - PanchanthangiPatti, a village 26 km from Madurai, is a mute victim of the chronic drought that afflicts the area. There are 30 other nearby villages cracking at the lips.

But one more year and all their troubles should be over. There will be water, crops, perhaps a little money, and much, much joy.

In these villages in the Madurai and Ramanathapuram districts of Tamil Nadu, a dream is slowly coming true. The much-needed renovations are being managed entirely by village-level institutions, assisted by a Madurai-based NGO, Professional Assistance for Development Action (PRADAN).

Village elder Machanalagan is optimistic. "By the next season, the renovation of the eri (a rainwater tank built by constructing a bund across a slope) will be complete," ending the drought, he explains. The eri was once the lifesource of the village. But in all his 50 years, Machanalagan cannot recall it ever having been renovated.

The eris symbolise an old rural tradition of self- management. There are about 40,000 of them in Tamil Nadu, some more than a millennium old. Together, they account for 0.9 in (million) ha out ofthe 2.8 in ha ofthe state's irrigated area. Says C R Shanmugam, programme officer at PRADAN, "Earlier, there was a system of kudimarammat (community work), which ensured that the eris remained well-maintained. People contributed tabour voluntarily for their repairs and maintenance."

But, as was typical of colonial administration, British officialdom sent the tradition to a watery grave by centralising their management and forcing the villagers to work for free. Through a series of legislations (the Kudimarammat Act, 1858; the Madras Village Panchayat Act, 1920; and the Irrigation Voluntary Cess Act, 1942), the management of the larger tanks (40 ha or more) was handed over to the Public Works Department, with the Panchayat Unions managing the 20,000 smaller tanks.

As a result most tanks have fallen into a state of decay and disrepair. Small and marginal farmers are the worst hit. In 1992, PRAMz began urging villagers to organise themselves into water users' associations (WUA) that would maintain their tanks. Membership to the WUA is open to all farmers owners and lessees - who have land failing under the command area of the tank.

Machanalagan is the secretary of Panchanthangipatti's 42-member fledgling WUA, which is now renovating the 3.2 ha eri with a command area of 5.64 ha. In a little over I year, the association has desilted the tank bed and the feeder (supply) channels, using the silt removed from it to increase the height of the eroded, semicircular earthen bund from I in to over 2 m. Check dams have been built across the feeder channels to red-ace further siltation, and the distribution channels have been cleaned.

"The sluice channels were a mess," says Machanalagan. "They had no proper shutters. We used to stuff coconut leaves and stones to close them." Today, the 2 sluices have been repaired @nd fitted with lockable shutters. "We have planted mango and coconut trees in the catchment area so that less silt comes into the tank," he adds.

The WUA has also dug a well in the bed of the eri to aug ment water supply. Says Vellaswami, WUA president, "The eri has water only for about 4 months a year, from October to January. We can use water from the well for the rest of the year." The association is currently in the piocess of constructing a surplus weir to@nsure that excess water flowing into the eri is safely conducted through a chap 'net to a canal nearby, thus preemptiqg inundation.

At first, the villagers shied away from physical tabour. "Initially, we hired A Jbulldozer for desilting. But that proved @ unsuccessful and expensive. We theA.decided to work ourselves," says Macharialagan.

But the main chunk of funds comes from the Jawahar liozgar Yojana, channeled through the District Rural Development Authority (DRDA). In addition, the farmers have decided on a sum of Rs 5 to be paid every month to the association. PRADAN also gives crop loans to the farmers. The interest paid by farmers is remitted to the WUA, although the principal is paid back to PRADAN.

Water allocations depend on the amount of land each farmer has, and the salaried neerkatti (water resource manager) is responsible for the right amount reaching the right fields at the right time, and with a minimum ofwastage.

To ensure that everyone gets his ration, users at the end of the canal draw first, followed progressively by those closer to the head. So, the traditionally deprived tailenders, too, are happy. Disputes occur, but are settled democratically.

Machanalagan walks along the newly-strengthened bund, bubbling with plans to start fishing in the eri soon. And his tone reflects the villagers' enthusiasm for their new experience: managing their own resources, natural and human.