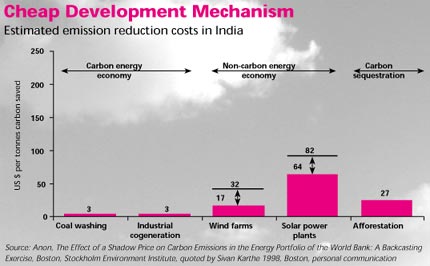 At Renewables 2004 "an international action plan will be on the agenda, including actions and commitments by governments, international organisations and stakeholders," says the conference announcement document. "The conference outcome will include arrangements for a follow-up and a mechanism to share information on progress in implementing the international action plan." But the big question is: Will the conference weaken the fight against climate change? Or will it provide the Kyoto Protocol -- the legal instrument to limit greenhouse gases now bottled up by the obduracy of rich nations -- the necessary push? That renewable energy can help in fighting climate change is indisputable. But even as the US and Russia have derailed the Kyoto Protocol, the EU's insistence on national targets for renewables is seen by developing countries as a new 'conditionality' on the development process.

Developing countries need the ecological and economic space for growth and for this the industrialised North must cut its emissions. The Kyoto Protocol provided the first, perhaps hesitant and weak, step. More importantly, the protocol was built on the global compact of equity and fairness in the use of global commons. The next step should have been to negotiate for equal rights and per capita entitlements to emit greenhouse gases. This would have created an incentive for developing countries to invest in renewables, made them more accessible and affordable.

Under the Kyoto Protocol, it has been agreed that nations can use instruments -- such as the Clean Development Mechanism (CDM) -- to trade their emissions, However, given the sheer intransigence of the rich nations to pay for the necessary transition, CDM projects favour the cheap end of change. The same mechanism could have encouraged transfer of renewable energy technology to developing countries, so ensuring developing economies access to the best available and least polluting renewable technologies to leapfrog to a non-carbon based energy trajectory.

Instead, the Kyoto Protocol's design supports short-term, cost saving and intermediate options like coal washing and gasification projects. Technologies like solar and wind, and new renewables like fuel cells, with very high emission reducing potential but comparatively high cost, are losing out.

Moreover, concerned civil society organisations, helpless against their own governments and worried about this trend, have turned on the pressure on the multilateral system -- the World Bank and such-like -- to stop financing fossil fuel energy projects. They argue that these funds are used to invest in polluting energy sources and want the banks to fund only renewable-based projects in developing countries. However, besides the sheer immorality of this arm-twisting, which shifts the burden of change from the rich to the poor nations, the groups fail to explain who indeed will pay for the higher costs of this transition (see: Does the end justify the means?).

Developing countries fear Renewables 2004 will turn into a negotiating forum to set targets, which will become conditionalities for aid or trade. They argue, instead, that targets must not be imposed upon nations. India already has a declared objective to have 10 per cent of all new electricity projects till 2012 from renewable energy sources. Thailand has announced it will increase the share of renewables in its entire primary energy sector from the current 0.5 per cent to 8 per cent by 2012. Brazil has been pursuing an aggressive programme, and has shown great success in ethanol use. Last heard, China was planning to introduce the feed-in-tariff mechanism, a very aggressive approach, to promote renewables. They believe that their future lies in a mix of energy technologies. Investment in biomass-based technologies, its research, development and dissemination will be their biggest opportunity for economic and ecological security.

Instead of forcing additional alternative targets, technology- and money-rich nations should realise that if the world needs to move to clean energy, they will need to do more than producing pretty words. They need to respect the environment and so reduce their emissions. Developing nations need the best in renewable technologies. This way, the entire world moves towards a renewable energy economy. Imposing targets or arm-twisting through conditional loans without defining rights and entitlements to emit carbon dioxide would only create more friction and distrust. The agenda, therefore, must rise above petty politics. It demands and deserves better.