Tehri dam oustees to be rehabilitated again; threat of landslides

Tehri dam oustees to be rehabilitated again; threat of landslides 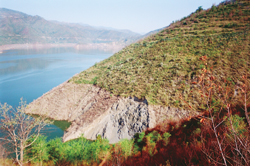 People living near the Tehri dam on the Bhagirathi river in Uttarakhand are in trouble. Villages on the slopes overlooking the reservoir are threatened by increasing landslides and those living downstream, once ousted for the building of the dam and rehabilitated, are losing their new homes to an airport expansion project.
People living upstream accuse the administration of neglecting the threat that the fragility of the higher slopes are posing to them and the dam. The 42-sq km reservoir of the 260.5 m-high Tehri dam is surrounded by slopes that are steep and unstable landslides, caused by heavy rains and cloudbursts, have been common there for a long time. Since February 2007, their frequency has grown exponentially, affecting 1,500-2,000 families in nine villages.The villages--Nakot, Dhaulakot, Kangsali, Jalwal, Chanthi, Raulakot, Garolia, Khola and Nautaar--on the slopes surrounding the rim of the reservoir are located above the high-flood level.

The agricultural lands of these and other villages are on the fragile areas downhill of the settlements. But they are still above the high-flood level and are under threat. The slopes contain fragile rocks. Changes in the water level in the reservoir cause small, progressive slides along the slopes because of seepage of water from the reservoir into the rocks and soil, which increases the moisture content in the soil and makes the rocks more fragile. This causes landslides closer to the reservoir and makes the upper slopes vulnerable. Huge fissures have been seen in Kangsali and Nautaar.

"This is a very dry, loosely sedimented area with hugely fractured and faulted rocks," says R C Mukherjee, a geologist at the Technology and Research Network, Dehradun. "The nature of landslips here is a direct result of the changed hydrogeology and heightened soil moisture due to the rise of water level following impoundment."
The landslides will also affect the dam, say experts. "The slides are going to supplement the sedimentation rate of the reservoir and this can drastically reduce the dam's life," says R K Mazari, a geologist with the Wadia Institute of Himalayan Geology (wihg) who had studied the instability of the rim slopes in 1983, and warned that withdrawal of water from the reservoir would eventually set off landslides. According to experts, rapid changes in the water level in the reservoir will cause slides. In 2002, a study by the Geological Survey of India (gsi) said a rise in water levels could increase pressure and the instability of the slopes.

With the situation getting increasingly grim, in April 2007, the state government asked gsi to undertake a study for treating the slopes as a 'longer-term' measure, which, experts say, is not a viable option. "The government ignored the wihg study. It wants new projects for slope stability, which will take decades. But people will remain displaced in the meantime," says Jayanta Bandyopadhyay of the Indian Institute of Management, Calcutta.
There are echoes of this opinion from the area. "A series of some 100 landslips have put over 100,000 people in some 150 villages in the Pratapnagar block at risk," says P D Juyal, president, Raika-Dharmandal Vikas Sangharsh Samiti, a forum working for evacuation and rehabilitation of affected villages.

Villagers say the slopes will not last a good monsoon. "In November 2006, when the water level dropped to 750 metres in the reservoir, many deep cracks appeared at a height of 200 metres, and above the hfl. It's dangerous to live here," says Shen Singh, a farmer from Kangsali. The gsi study has estimated that 46 per cent of the 7,276 hectares (ha) in the landslide zone is farm land. "Fertile lands are vanishing fast. We have been requesting rehabilitation, but in vain," says Satya Singh Chauhan, also of Kangsali. "When all our land is disappearing this way, where will we go?" he asks.

Landslides have also forced animals to flee to the safer upper slopes. "Boars invade our fields and destroy crops. Many of us have lost our crops to boar attacks," says Dinesh Singh of Kangsali. Jupa Devi owns 0.73 ha of land. Half her land, on the lower slopes, has been lost to landslips and the crops on the land on the upper slopes have been destroyed by boars. "I can barely meet the needs of my family from what remains," she says.


The area is still neglected. Madan Negi village, which has lost swathes of farm land, has not featured in rehabilitation plans. In March 2001, Uttarakhand's director of rehabilitation had asked gsi to study the impacts. gsi confirmed the threat. With the authorities still to act, in May 2004, Juyal moved the high court for rehabilitation. "Our plea went unheeded. In October 2005, the government gave a false affidavit, refusing to take the matter seriously," Juyal says.


Downstream, a set of people ousted during the construction of the Tehri dam is facing displacement, for a second time.

Villagers rehabilitated in 1987 after being evacuated from Garhwal have been forced to make way for Dehradun's Jolly Grant airport expansion. About 20 families from Athoorvala village have been relocated to forestland in Dudhupaani near Rishikesh, which, they say, is not habitable. Another 44 families met the same fate. According to villagers, the expansion has affected about 200 more families whom the government has not rehabilitated.

"The area of the airport has been expanded from about 30 to 70 ha," says Nilesh Kumar, assistant manager of civil aviation, Jolly Grant airport. The land acquired for the expansion is more than what has been officially claimed, say villagers. About 25 to 30 ha have already been acquired for the project along with a 2-km stretch of road. "About 100 houses were razed and 120 ha acquired in Athoorvaala and Jolly Grant villages," says Devender Kothari of Sanyukta Sangharsh Samiti, a local action group. Villagers say construction began in January 2005 without notice. They agitated for 72 days and stopped land survey at Pashulok where they were being given only 0.40 ha. Protestors were jailed. Villagers had moved the Supreme Court, and the case is still pending.


Those ousted by the Tehri dam were given a compensation of 0.8 ha of land and 300 sq m of residential plot. But the local residents say the compensation is not enough. "The compensation amount was calculated at Rs 4 lakh per acre. Moreover, they demand a development cost for making the forestland fit for inhabitation," says Kothari. "A development cost of Rs 31,000 per household was estimated by the government and each family had to pay 50 per cent of this amount. Now this has been hiked to Rs 80,000 for 400 sq m. Where will people get this from?" asks Kothari. The resettled people have not been given deeds to their land and they cannot obtain loans by pledging their land. "We strove hard to make the land fit to live. Now we are again evicted and the government wants us to pay to develop new land," says Kamla Devi from Bagi village who was displaced in 1987.


But the officials have a different version. "We had given hefty compensation to the people, yet their demands are mounting," says Girish Kumar Sharma, sub-divisional officer, Rishikesh.But the ousted people counter these claims. "There were families who had 5 ha. Even though 73 per cent of their land was seized, they were not given anything," says Kothari. Rajendra Biljwan of Jolly village had four brothers with a house each along with 2.5 ha of land and property worth Rs 26 lakh. "I have got only a 400 sq m plot for building my house and no assistance," he says. "We got Rs 80,000 per acre, which was later hiked to Rs 2 lakh following protests," says Sarojini Devi. The market value for the land is about Rs 30 lakh per 0.4 acre.

"Uttarakhand's development policy focuses on increasing revenue and will generate more displacement," says R Sreedhar of the Academy of Mountain Environics, a Dehradun ngo. "The resettlement and rehabilitation policy is based on the colonial land acquisition act. It is incomplete and unequal," says Bandyopadhyay. There is a need to revamp policy by understanding local ecology, society and culture, they say.