Soil conservation work came cheap in Jhabua, but a lot remains to be done 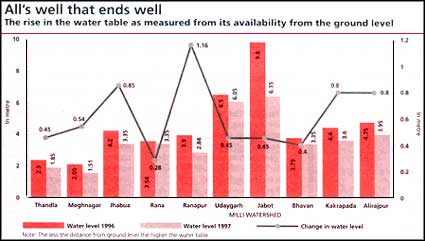 the pebbles in the fields have become potatoes in the Hathipawa microshed of Jhabua district. In Phoolgaodi village, the villagers are celebrating the Year as the year of the Grass. In 40 ha of degraded government land, the watershed mission took up pasture development, where the production of more than 50,000 kg of grass is going to change the life of the villagers. The government has decided to give this land permanently to the village.

In Kanadipura, a sumptuous meal of aloo - roti (potato and bread) is being prepared in many a household. With the regreening of the hills, the area has become prosperous once again.

All this came cheap. According to Gopalakrishnan, the cost of treating one hectare of land came to Rs 3,000. One of the reasons being that not a single extra official was hired exclusively for this project. Raw material locally available was used for the minor construction work carried out in the area.A B Gupta, the district forest officer, pegs the cost at around Rs 2,500 per ha in Jhabua, while the Dhar district rural development authority (drda) chief claims it to be around Rs 1,800 per ha. One reason for this is that more people are coming in to offer voluntary labour as the benefits of the project are publicised.

Ecological changes in the area are also showing up. The groundwater table has begun to rise (see graph: All's well that ends well). The conservation of soil and water has also changed the crop patterns. In the valley area of the hills, farmers have now started cultivating two crops, including paddy, which requires a lot of water.

The very hills - the angry giants - which contributed to Jhabua's ruin are the reasons for the success of the watershed mission. Nearly 30 per cent of Jhabua's terrain has a gradient and its terrain is the kind that will respond to watershed treatment. The regreening of the hills helped in retarding surface runoff and led to the absorption of water by the ground. But behind all this is the formidable political will of chief minister Digvijay Singh, bludgeoning the hills into submission and the bureaucracy into meek acquiescence.

The other reasons are social. Since 86 per cent of the population is tribal - without distinctions of caste and creed and living under the same economic conditions - the process of convincing the locals about the mission was easy. The equilibrium between nature and people had already been lost and since the rate of migration was unduly high it made the residents highly adaptable to new situations, by exposing them to the world outside their villages.

"This was the only dividend of large migration. It not only helped people in adopting a new concept but also helped the villagers in dealing with officials," says Rajesh Rajouria, drda chief, Jhabua.

Since there was already a joint forestry management programme in existence before the introduction of the mission it also helped as the mission did not have to create a people based superstructure when it began. It was possible for the forest department to smoothly involve the people in the project through village forest councils which had already been set up.


The ghost of Sukhomajri in Haryana, however, haunts Jhabua. Will the success of Jhabua run out of steam and face a failure similar to that of Sukhomajri is the question in the minds of planners and environmentalists. Sukhomajri was a dream come true for the forest department and the people in Haryana. Then it soured.

Before Sukhomajri the Haryana forest department used to work on public and forest lands. But the work produced further conflicts between local people and foresters. The forest department was obviously not catering to the needs of fuel and fodder, which was alienating the people from the process.

Then came the Sukhomajri experiment, clearly demonstrating to the Haryana forest department that with the involvement of the community the results were long lasting. But no real effort was made to hand over the management of resources to the people. The result was a series of unending conflicts.

At the same time it is necessary to understand the needs of the different classes of people working in the village. Whether they are big, small or marginal farmers. Locally available technology also has to be assessed. The experiment failed in the Mittemari project in Karnataka as a uniform technology package was adopted for all the farmers. Worse, the participation of the people was incidental. No provisions were made for the transfer of the project to the locals once the officials left. So when the government exited, the project collapsed like a house of card.

The ghost of past failures haunts the success story of Jhabua. As fodder has been given prime importance in the project, it is feared that once the forest regenerates, it may lead to a reduction in the quantity of grass available for cattle in the area, leading to a conflict between the largely pastoral population and the forest. But officials and experts feel differently.

People will switch to better livestock and smaller cattle holdings, preferring it to large low-yielding stock, due to the availability of fodder. This will then bring down the demand for fodder, feels P K Mishra, executive director for the Society for Promotion of Wasteland Development (spwd), New Delhi.

"For the tribals, the economy is based upon the ecology of the region," says Mishra, adding that this is due to their dependence on the forest. "Definitely the availability of grass will decrease. But the forest will regenerate and sustain the people." But when the four-year mission is over, and the link between the government and the people, an essential prerequisite to implementing the project, diminishes, will the people be able to manage and will it be possible for them to continue interacting with the government?

In some of the watersheds where the mission is in the process of winding up people still run to officials for the sanctioning of funds and to check out the technicalities involved. It is a natural outcome as villagers are members of different groups and have to manage all the activities. For instance, 17 books of accounts are required to be maintained in a single watershed by a community that is largely illiterate.

However, Gopalakrishnan is upbeat. He has faith in the institution of the watershed committee and the women's thrift and credit organisations which, he feels, have proved themselves to be the power centre of the people at the lowest level. Once the people realise the benefits of the project it is very difficult to see it failing, he believes.

There has been a decrease in the migration rate which is now pegged at 33 per cent and land productivity has gone up. Officials feel these are indications of the project's sustainability.

There is another danger. The danger of conflicts arising over the use of peoples' money. The chances of this increase when funds are managed without any legal sanction or formal modalities.

However, Mishra seems to concur with Gopalakrishnan. "These grassroots organisations have been constructed as the pillars of the watershed activities. When the government was planning for a national programme on watersheds, institution-building was given priority. In mp, these institutions have proved to be effective so they will not create conflicts," says Mishra.

The grassroots organisations under the mission have certain credibility among the villagers as they are non-political. However, as they evolve and become stronger, the panchayat institutions will certainly be facing parallel power centres. To avoid this, district authorities have seen to it that most gram panchayat members become secretaries of the watershed committees. But it is possible that subsequent political interference may result in turning the watershed committees into bodies more political than they are supposed to be. Moreover the chances of conflicts over land are very high as the gram panchayat owns the common land and the committee owns the watershed and the area where the activities are carried out.

In the three years of the mission's work such problems have been noted. The status report of the mission observes that it is much better if the demands of the different groups are placed together and each group gets a feel of the other's demand. This brings out the latent conflicts between the demands. It also highlights the impossibility of meeting the demands of all groups from available resources. Different views of groups and members of groups are reconciled to find out impartial solutions. Efforts to resolve conflicts ensure that the benefits are shared equitably and the assets are maintained jointly by the community itself.

But Mishra is certain that Jhabua is a model that can be emulated nationwide due to its people participatory nature.