Swadhyay, which literally means study of the self, is a movement that has introduced realistic social change in India's rural communities 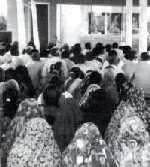 the Indian government has continuously pumped resources into rural areas to alleviate poverty, but with little success. The core issues-human development, inculcation of values in the society, reduction of conflict and elimination of wasteful practices such as caste discrimination-have somehow been ignored in our paradigm of solutions. Social movements are generally frowned upon by the government, particularly when they use strong religious symbols. These do not fit into the schematic ethos of secularism. Outside the government fold, a powerful social movement has taken root silently, offering solutions to the core problems. This is Swadhyay, a movement that has worked miracles unknown to the government.

Swadhyay is a semi-religious fraternity that has been functioning in 80,000 villages of 12 states in India, of which approximately 12,000 to 15,000 villages are fully Swadh-yayi . For want of empirical studies, it is difficult to establish the extent of this movement in any precise terms. The movement's modest beginnings can be traced back to 1958, when only 19 volunteers participated in its first devotional tour. Today, it has more than 70,00,000 followers.
Swadhyay literally means study of the self, or introspection. It starts with the underlying principle that all people are children of the same god. However, human beings do not realise this because of the curtain of avidya , or ignorance, that veils their character. Swadhyay believes in the universality, equality and brotherhood of humans. Yet, there are barriers, such as religion, caste, ownership of resources, colour, learning, which draw distinction between human beings. Swadhyay does take cognisance of the fact that the human society has become exploitative in character. Perhaps the worst form of denial that a society can practice is that of learning.

The movement is based on the philosophy of Panduranga Shastri Athwale, popularly known as Dadaji, one of the greatest thinkers, sociologists and leaders India has ever produced. His teachings focus on spiritual upliftment of the individual. Dadaji believes that this can only come through a strong faith in god, for which the movement uses strong religious symbols. But this does not imply that Swadhyay is limited to any particular religion. Even if these religious tenets are unpalatable to our political ethos that is nurtured on concepts of Nehruvian secularism, we should not forget that there were strong religious overtones to the freedom movement initiated by Mahatma Gandhi. Swadhyay has strong secular aspects, though not in the sense that secularism is commonly understood.

The village of Nehrala in district Junagarh, Gujarat, is completely Swadhyayi . It comprises 40 households of Karodia Rajputs, 70 households of Harijans, and 10 households of Siddi Muslims. It had a history of discrimination against Koli Harijans and Siddi Muslims. Says Mangal Bhai, leader of the Siddi Muslims: "We were being treated like animals, in fact a little worse. We had no rights, no dignity, no power and perhaps no life in human terms. With the coming of Swadhyay, all this is a thing of the distant past. There is no discrimination of any kind now, no exploitation, no quarrels, no strife and no dissent. We are all one, all children of the same god. We Siddis regularly come to the Amritalay (temple). We have helped to build it. Likewise, our mosque was built by Hindus."
Swadhyay centres around the principle that there should be no donation and no charity for it breeds feelings of inequality. For this, Swadhyay discourages renunciation and mendicancy. Poverty has been perhaps the most sordid aspect of our economic life in post-independence India. Our policy structure includes programmes devoted to the eradication of poverty backed by investments in the rural sector. But poverty has only increased in the last decade or so. Obviously, this approach leaves a lot to be desired.

In the Swadhyay approach, poverty is not something born out of exclusively physical factors. It has more to do with mental status. There are stages of poverty, and the first of these is mental poverty, which leads to self-limiting social, economic and religious practices. The Swadhyay method can be illustrated by the example of village Ravanpalli in district Nizamabad, Andhra Pradesh. The village has a population of 800. A reputed non-governmental organisation ( ngo ) came to the village and wanted to adopt it. Loans were offered on attractive terms, among other benefits. The villagers refused to accept these inducements - though politely.

There are about 23 different institutions developed within Swadhyay. Each one of them is comprehensive, yet linked to the main process. Dadaji has used strong symbols and interpretations of traditional religious rites to establish that the devotion of labour is the most powerful form of devotion. Every Swadhyayi is expected to offer two days of labour every month to god, in other words to the society. This is known as Shram Bhakti .

The implication of this is that the society cuts down on its leisure time and uses it for productive purposes. It is difficult to estimate the monetary value of the contribution and the wealth created by the movement as the contribution comes from diverse sources and skills. If an average of Rs 100 per person per day is taken, the figure would stand at Rs 7.20 crore. However, if an economic valuation including the secondary benefits were to be taken into account, it would be far greater.


The concept of Yogeshwar Krishi is one of the institutions of the movement and is only initiated in villages where more than 40 per cent of the population has become Swadhyayi . This is necessary for the sustenance of the operations. The permission to start Yogeshwar Krishi is taken after considering the sustainability of the experiment and the commitment of the local Swadhyayi populace. Under Yogeshwar Krishi , land is not owned. It is either rented or leased. Even where a Swadhyayi wants to donate land for Yogeshwar Krishi , it is not accepted. Payment is made as lease rent or rent as per the prevailing market prices. The size of an average Yogeshwar Krishi farm is approximately 1.5 to 2 hectares.

Every Swadhyayi village has three "elder brothers". They are normally selected by the community on the basis of their experience, commitment and the time they can devote to Swadhyay work. Any form of election is strictly prohibited. It is only selection. The elder brothers are jointly responsible for the management of the farm but all decisions regarding the crops to be sown, the time of harvesting, marketing of the produce and irrigation, among other things, are taken in consultation with the Swadhyay family. It is a form of collective decision-making. The system operates on trust, and paperwork and formalism are kept to a bare minimum. No case has been reported so far of the elder brothers deliberately taking a decision to the detriment of the community or in their own self-interest.

The appointment of labours is made according to the season. The days are fixed for each Swadhyayi willing to undertake Shram Bhakti . I have visited at least five to six villages practising Yogeshwar Krishi . I invariably found Swadhyayis working on the field without any supervision and I found them highly motivated. I observed that Yogeshwar Krishi also acts as a centre of agricultural research and dissemination of sustainable technology. The use of chemical fertilisers and pesticides has been discouraged, and there is increasing reliance on biomanures and indigenous pesticides. Vermiculture compost has been introduced into villages, and has been taken up by the villagers on a very large scale.

Another achievement worth mentioning is the use of groundwater resources and the recharging of wells. About decade ago, depletion of groundwater had led to the ingress of sea water in coastal regions. However, Swadhyayis began recharging the wells by a number of simple techniques. Almost 80,000 wells were recharged in Veeraval itself.

Distribution and sharing of resources has always been a problem. Swadhyay has a simple solution. Two-thirds of the produce is remitted to the Central Trust in Mumbai. The remaining is used by the village community. Yogeshwar Krishi has a bank account in which the sale proceeds are deposited. These can be used for the development of the farm. More commonly, they are used to taking care of the needs of the community


The question that now arises is: can this experiment be replicated? Doubts may be raised that a religion-based movement would have little inter-religious appeal. It is also claimed that the movement is sustained by the personality of Dadaji. Once his presence is removed from the scene, the movement may collapse. However, the movement has rapidly gained grounds after a very slow start. It is primarily a community movement deriving sustenance from individuals of the community and is self-sustaining. It is something the like of which both governments and ngo s have never known. Perhaps the independence of village economy conceived by Mahatma Gandhi and discussed elaborately in his book Hind Swaraj , is the only comparison.

There is a remarkable unity in the thoughts of Mahatma Gandhi and Dadaji. Mahatma Gandhi was an original economic thinker, a social scientist, a religious reformer and a social activist. However, he did not have the time to perfect his methodology for social reconstruction - preoccupied as he was with the freedom struggle. Dadaji, on the other hand, is a practical thinker. He has not only a theoretical framework for Swadhyay, but also a process by which it can be attained. In many instances, the success of Swadhyay has come first, followed by the theory.